For more than four years, Mary Ann Ritter Arnold watched over Marked Tree as mayor, but her death last year has opened the door for new leadership in the small Poinsett County town of 2,500 people.

Jim Huff, 69, and McDaniel "Danny" Johnson, 62, are running to replace Steve Craig, who was appointed interim mayor earlier this year after Arnold's death in December but has chosen not to run for office. The mayor's position is a four-year term.

Arnold, 90, was the former president of E. Ritter & Co., a family-owned company based in Marked Tree that distributes agricultural supplies and telecommunication services throughout northeast and north-central Arkansas.

Her passion for promoting the town of Marked Tree was well-documented. Arnold's efforts were crucial in revitalizing the town's business district, and she became the town's first female mayor in 2013 when she was chosen to complete the term of Wayne Nichols. Residents re-elected Arnold in 2014, at age 87.

Huff said he wants to build on what Arnold started. He was raised in Marked Tree but lived in Kansas for the majority of his life before retiring in 2015 and moving back to Marked Tree.

"I noticed business were closed, and houses were deteriorating," Huff said

So Huff went to talk to Arnold, and the former mayor presented him with a possible solution.

"She asked, 'Why don't you become my code enforcement officer, then?" Huff said with a laugh. "She wanted me to help clean up the city, and I want to continue doing that job. I want to carry on what she wanted to be done."

Huff said cleaning up the town is important if it is to move forward.

"I believe if we can make the city look presentable, then business will come back here," Huff said. "The plan is to bring jobs here and something for the youth to do here."

Johnson, born and raised in Marked Tree, agrees that the city needs to work on its appearance.

"I want to clean it up," said Johnson, who serves on the City Council. "I want to see if we can get it to grow again."

Huff said Marked Tree has been hurt by a number of issues over the past few years. He noted a heated battle over the fate of Carver Gym, the last surviving structure from the town's segregation-era school for black students, that he said took the city close to its breaking point. He also noted past problems within the Police Department that eventually led to the suspension and resignation of its chief.

"It's going to take time for this city to heal," Huff said. "I want to bring everybody together again to help us save our city."

Johnson said accountability is the first thing he wants to instill in the Police Department.

"We have lacked accountability," he said. "We got to stop pulling people over for petty things like seat belt violations and faulty tags, and start working on getting rid of the drugs in our town."

Putting an end to the drug trade in Marked Tree is his top priority, Johnson said, adding that he wants to work with county and state law enforcement officials to accomplish that.

City officials also are going to have to work to regain the trust of residents, he said.

"I am going to have an understanding with the workers," Johnson said. "We are going to treat people like you want to be treated, and if that requires an overhaul, then that is OK."

Johnson said his experience on the City Council can help him as mayor.

"Sitting there and listening to people's concerns and going through the budget helped me get a real good evaluation of what is going on in our city," Johnson said.

Early voting for the general election continues through Nov. 5. Election day is Nov. 6. 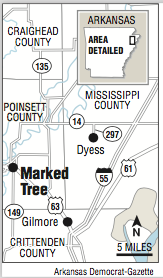