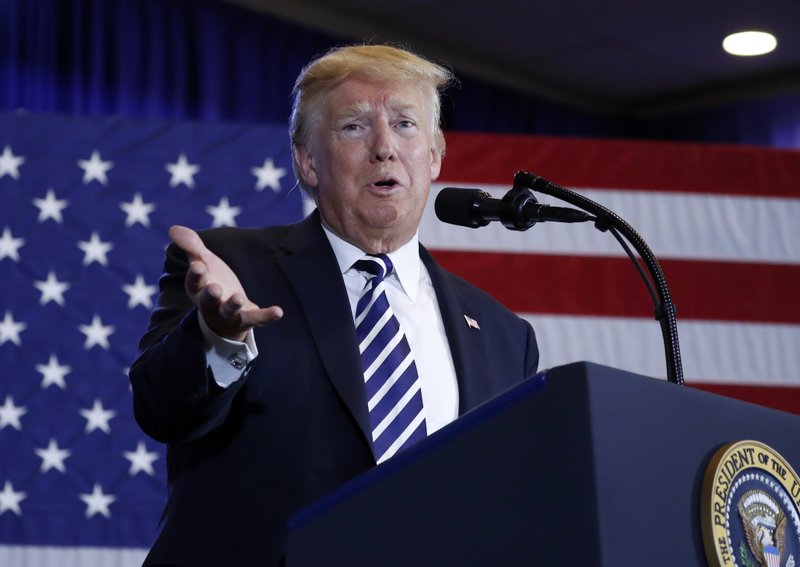 In his latest broadside against the Justice Department's traditional independence, Trump tweeted that "Obama era investigations, of two very popular Republican Congressmen were brought to a well publicized charge, just ahead of the Mid-Terms, by the Jeff Sessions Justice Department."

He added: "Two easy wins now in doubt because there is not enough time. Good job Jeff......"

Trump has frequently suggested he views Justice less as a law enforcement agency and more as a department that is supposed to do his personal and political bidding. Still, investigators are never supposed to take into account the political affiliations of the people they investigate.

Trump, who did not address the specifics of the charges, did not name the Republicans. But he was apparently referring to the first two Republicans to endorse him in the GOP presidential primaries. Both were indicted on separate charges last month: Rep. Duncan Hunter of California on charges that included spending campaign funds for personal expenses and Rep. Chris Collins of New York on insider trading. Both have proclaimed their innocence.

Hunter has not exited his race, while Collins ended his re-election bid days after his indictment. Both seats appear likely to remain in GOP hands, but the charges have raised Democratic hopes.

A spokeswoman for Sessions declined comment, and the White House did not immediately respond to a request for comment. Trump did not have any public events Monday. He briefly exited the White House to a waiting motorcade but then went back inside without going anywhere.

Trump's tweet drew a scolding from Sen. Ben Sasse, a Nebraska Republican who sits on the Senate Judiciary Committee.

"The United States is not some banana republic with a two-tiered system of justice — one for the majority party and one for the minority party," Sasse said in a statement. "These two men have been charged with crimes because of evidence, not because of who the President was when the investigations began. Instead of commenting on ongoing investigations and prosecutions, the job of the President of the United States is to defend the Constitution and protect the impartial administration of justice."

Trump has previously pressed Sessions to investigate his perceived enemies and has accused Sessions of failing to take control of the Justice Department. Trump has also repeatedly complained publicly and privately over Sessions' decision to recuse himself from the federal investigation into possible collusion between the Trump campaign and Russia because he'd worked on Trump's campaign.

Some of the issues Trump has raised have either already been examined or are being investigated.

The tension between Trump and Sessions boiled over recently with Sessions punching back, saying that he and his department "will not be improperly influenced by political considerations." Still, Sessions has made clear to associates that he has no intention of leaving his job voluntarily despite Trump's constant criticism.

Allies, including Republican members of Congress, have long advised Trump that firing Sessions — especially before the November midterm elections — would be deeply damaging to the party. But some have indicated that Trump may make a change after the elections.

"I think there will come a time, sooner rather than later, where it will be time to have a new face and a fresh voice at the Department of Justice," Sen. Lindsey Graham of South Carolina told reporters recently.

WASHINGTON — President Donald Trump started his Labor Day with an attack on a top union leader, lashing out after criticism from AFL-CIO President Richard Trumka.

Trump tweeted Monday that Trumka "represented his union poorly on television this weekend." He added: "it is easy to see why unions are doing so poorly. A Dem!"

The president's attack came after Trumka appeared on Fox News Sunday over the weekend and said efforts to overhaul the North American Free Trade Agreement should include Canada. Trumka, whose organization is an umbrella group for most unions, said the economies of the United States, Canada and Mexico are "integrated" and "it's pretty hard to see how that would work without having Canada in the deal."

Trump said Saturday on Twitter that there was "no political necessity" to keep Canada in NAFTA. But it's questionable whether Trump can unilaterally exclude Canada from a deal to replace the three-nation NAFTA agreement, without the approval of Congress. Any such move would likely face lengthy legal and congressional challenges.

Trump administration negotiations to keep Canada in the reimagined trade bloc are to resume this week as Washington and Ottawa try to break a deadlock over issues such as Canada's dairy market and U.S. efforts to shield drug companies from generic competition.

Trump wants to get a trade deal finalized by Dec. 1.

Trumka also said of Trump: "The things that he's done to hurt workers outpace what he's done to help workers," arguing that Trump has not come through with an infrastructure program and has overturned regulations that "will hurt us on the job."

The unemployment rate of 3.9 percent is not at the best point ever — it is near the lowest in 18 years.