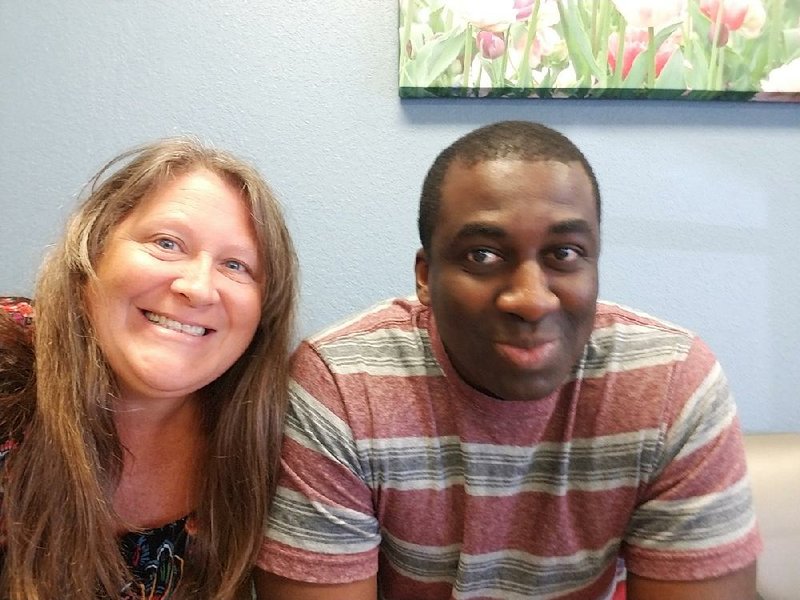 Ronnie (right) had been homeless for almost 20 years, until Tiffany Myers let him stay with her family in her Fayetteville apartment.

Myers lives with Ronnie, who until late last year slept in a tent in the woods nearby and, Myers said, has been homeless for almost 20 years. Ronnie, who's in his late 30s, sometimes has trouble pinning down memories and laughs when he comes up blank. He can't remember how long he's been on the streets or where in particular -- just that it's been a long time.

Myers makes a living as a dump truck operator and has a side gig driving for Lyft.. Ronnie has stayed with her for about a year as she and her daughters helped him get an ID, sign up for disability and Medicaid, try to find housing and go to mental-health appointments for the first time. Myers said he recently was diagnosed with schizoaffective disorder, which can cause symptoms of both a mood disorder and schizophrenia, such as delusions or difficulty communicating.

Ronnie, whose first name only is being used because his condition has until recently gone untreated, said he hopes to get a job, maybe at a grocery store or picking up trash, and to find his own home. His life could take many courses, he said. He's trying find a good one.

"I just didn't want to see him freeze to death," she said, adding there are others with similar needs around the area. "Some won't ever ask you for anything. You're not going to find him on the corner."

Their story -- one person's attempt to help another not be homeless -- is a microcosm of a much broader, regional endeavor that has taken off in the past couple of years.

A coalition of shelters and service providers called the Northwest Arkansas Continuum of Care works to find people in need and house them quickly. The group counts more than 1,000 people in Benton, Carroll, Madison and Washington who sleep in temporary shelter or in a car or otherwise lack a roof.

Roughly 200 of those people are considered chronically homeless, meaning, like Ronnie, they have experienced homelessness repeatedly or for a prolonged period of time and have a disabling physical or mental condition, said Cari Bogulski, the Continuum of Care's board secretary and director of statistics and analytics at the Center for Collaborative Care in Springdale. She added even more people likely haven't been counted yet.

Those who are chronically homeless include several people staying at a camp on University of Arkansas, Fayetteville-owned land on the city's south side who have been told to clear out by Thursday, said Steve Burt, Continuum's executive director.

Chronic cases can be complicated and time-intensive and are often the toughest to address, not least because some people with the most severe or complex needs turn down help or won't seek it, said Deja Glover, a case manager at 7 Hills Homeless Center in Fayetteville.

Glover couldn't speak on any individual's case for confidentiality reasons, but she said if someone has been able to push through those difficulties for a person like Ronnie, "It's almost a miracle."

Myers said she connected with Ronnie through sheer determination. She noticed him about two years ago walking regularly along her street and wearing shorts and a T-shirt even in the winter. Her first encounter with him was to try to give him money, which he took after some hesitation.

Myers later found his tent to deliver a coat and a pair of pants. He told her his first name, but otherwise barely spoke or left his tent. Myers said she talked to him for about two hours before finally asking if he would want to go with her to Kingdom Hall, a gathering place for Jehovah's Witnesses like her. He said nothing and stood up. There he gave his last name, and Myers got to work.

Ronnie's name and his presence in Arkansas Department of Finance and Administration records allowed him to get an Arkansas ID card, Myers said, calling it "the biggest blessing in the world." She sat with him on the couch asking for his mother's name and other information to get a birth certificate from the state Bureau of Vital Statistics and other documents. Every time he said he couldn't do those tasks on his own, she said her response was, "Come with me."

Ronnie, who's well-built and keeps his hair short, has lived with Myers through the process. He's often silent but can hold conversations, speaking slowly and sometimes repeating himself or getting on his own train of thought with a laugh. During the day he typically stays in Myers' living room with the window blinds closed.

He started getting $750 a month in disability benefits a few months ago, which Myers said goes toward his rent and food and other expenses at her place. He occasionally leaves the apartment, but always comes back, she added. She's helped him adopt a more healthful diet and tries to teach him such basics as how to spend money or make food that's not straight out of a can.

"As long as he's with me, I guess I can watch him and help with all the little things that he doesn't know how to do," she said.

Myers also went to Fayetteville District Court to seal Ronnie's criminal record, which she said includes several arrests for shoplifting food. Advocates and other people experiencing homelessness have said that criminal records often can be obstacles to securing housing.

Ekiuwa Otote, one of Myers' three daughters and a recent college graduate, said her mother has never gone as far before to help someone, but she has given backpacks filled with supplies to people who are homeless as long as Otote can remember. Otote and her siblings have some concerns about the situation, she added, but accept it and help out; she, for example, has gone with Ronnie for meals at restaurants.

Ronnie started going to Ozark Guidance in August and said he's not thrilled at the idea of taking medication, but will if it helps him. Myers said he's also set to go into the organization's Springhouse program, an outpatient day program that offers individual and group therapy and practice for life skills.

"I think it's going to be one of the best things for him so far," Myers said.

Ronnie said he doesn't know how long he's been in Fayetteville, but he grew up with his parents and a brother in West Memphis on the east Arkansas border.

He graduated high school and left soon after, saying he was overwhelmed by work at factories and cleaning jobs. He said he hasn't seen his family in years. His father has heart problems, and Ronnie worries he makes his parents' health worse, he said, "because of how I am." He described his condition as like being jerked around by his mind.

Ronnie said he assaulted people in his youth, but his aunt, Dora Inmon, said she strongly doubts that's true of her nephew, who was nicknamed Pooh Bear as a kid. She described him as a slow learner who was often anxious as a child about making mistakes.

Ronnie's mother kept him at home at all times outside of school or church and raised him strictly, Inmon said, adding she believes mental health problems run in Ronnie's family.

"He did not go and visit nobody," Inmon said of Ronnie. She helped Myers with Ronnie's personal information and documentation but thinks his mother would be against that kind of help.

"I'm glad that Pooh Bear is getting some help," Inmon said.

Myers' past is also complicated, with stints of homelessness in her car or in the woods when her daughters were young because of poverty or joblessness. Otote said she remembered briefly staying at the Salvation Army in Fayetteville before she was old enough for school.

Myers said she wasn't familiar with the Continuum of Care, but she knows churches and other groups weren't giving the kind of help they do today. 7 Hills wasn't even around for much of the time she was homeless, she said. Ronnie's counselor said he might not be able to live alone, and she's accepted the possibility of helping him long-term.

Myers in some ways has taken on the job of a case manager for Ronnie by arranging appointments and going through his needs one by one.

The city of Fayetteville, 7 Hills, Genesis Church in Fayetteville, the region's women's shelters and other members of the Continuum of Care also provide that kind of help for people like Ronnie and are working on coordinating their efforts better, Burt said.

The Center for Collaborative Care, for example, maintains a list of everyone Continuum members have encountered and assessed, and Continuum member groups have found housing for about 200 of those people since January. A cluster of south Fayetteville groups are partnering to help the campers there find housing before Thursday.

"Everybody who touches an individual is going to be in the same room, so we can consolidate our resources and get that person what they need," Burt said.

The region also needs more case managers who can give the kind of time and attention that Myers has, Burt added. He hopes to find grants to help that happen.

Ozark Guidance recently wrapped up a three-year grant program from the federal Substance Abuse and Mental Health Services Administration that sent case manager Allen Gregory onto the streets to find people with mental illness and a need for housing.

Gregory said he reached more than 100 people and helped house about a dozen, many of them affected by schizoaffective disorder, trauma or anxiety. He pointed to high rents and income requirements as part of the reason for the low number housed.

"I feel like I've barely scratched the surface," he said. "I wish I could have gotten everybody off the street."

Burt said the Continuum is trying to get more U.S. Department of Housing and Urban Development money for permanent supportive housing, for instance, which provides long-term rent assistance for people with disabilities.

As for mental health needs, Glover at 7 Hills said Washington County's 16-bed crisis stabilization unit should help people with severe mental illness who encounter police to avoid a cycle of arrests, jails and fines. The county plans to set up the unit soon at one of its Fayetteville buildings under the management of Ozark Guidance. It's meant to hold and stabilize people in psychological crisis for up to three days before referring them to outpatient treatment.

No case is hopeless, Burt said. He praised Myers' commitment to helping Ronnie.

Glover noted that helping people with severe mental health needs or other complex needs can be a bumpy process -- a mental illness might cause someone to abruptly get fed up with or leave the person helping him, for example.

"It's a gamble," Glover said. "But it's a gamble with all human beings."