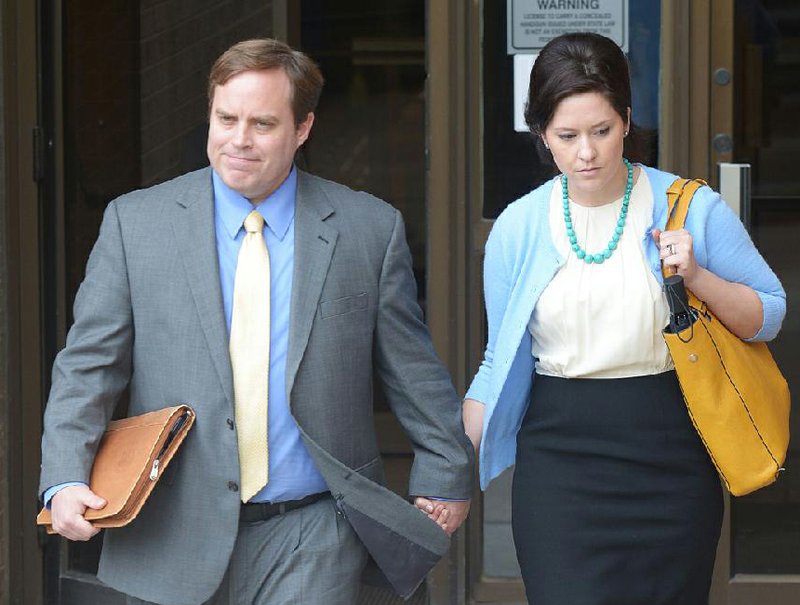 FILE — Jon Woods and his wife, Christina, leave the federal building in Fayetteville on May 4 after the former state senator was found guilty on 15 charges in a kickback scheme.

A former Arkansas senator has been sentenced to more than 18 years in prison after his conviction earlier this year in a public corruption case.

Woods, a Republican, was convicted in May of 15 counts of fraud for a bribery scheme in which prosecutors said he and another state legislator worked to steer state money to a private Christian college.

Prosecutors said Woods and former state Rep. Micah Neal directed approximately $600,000 in state funds to two nonprofits, including Ecclesia College, in exchange for kickbacks that were funneled through a consulting company.

In a statement, U.S. Attorney for the Western District of Arkansas Duane Kees said: "This sentence should send a message to the people who would abuse the trust of Arkansas voters and citizens. It should serve as a serious warning to those who would intentionally steal money from taxpayers and use their elected office to both commit and conceal their crimes."

Woods is among several former Arkansas lawmakers who have been convicted or indicted of federal corruption charges over the past year. A nephew of the governor resigned from the state Senate Friday after being indicted on federal charges of spending thousands of campaign dollars on personal items.

Woods has been released on bond and must self-surrender for his sentence Sept. 26. He is expected to file an appeal alleging widespread government misconduct from the U.S. attorney's office, the FBI and even his original attorney, defense attorneys said previously.

A $1 million state grant to a company run by a convicted lobbyist and obtained by a bribe will be considered in the sentencing of former state Sen. Jon Woods even though he wasn't convicted in the scheme, a judge has ruled.

Woods of Springdale was convicted May 3 of 15 counts of public corruption for kickbacks in other schemes. His sentencing hearing is continuing Wednesday afternoon in federal court.

U.S. District Judge Timothy Brooks overrode defense objections Wednesday morning, saying the Alternative Opportunities grant was a relevant part of a wider scheme. The grant was made under Act 791 or 2013, which Woods sponsored.

Woods' sentencing was the first of four scheduled this week and next in an ongoing federal and state investigation.

His corruption case was the first in a string of indictments involving abuse of grants from the state's General Improvement Fund. Further investigations resulted in other charges for other former lawmakers involving bribery and Medicaid fraud.

Five former lawmakers stand convicted in the ongoing federal and state investigations. Jeremy Hutchinson, who was chairman of the Senate's Judiciary Committee, resigned Friday after he was charged by federal authorities with diverting campaign funds to his personal use.

Woods was convicted in kickback schemes involving Ecclesia College in Springdale and AmeriWorks, a Bentonville nonprofit company. He received kickbacks on $350,000 in state General Improvement Fund grants he directed to Ecclesia and $275,000 in grants he sent to AmeriWorks. Prosecutors didn't specify how much money Woods received in kickbacks because all but a $40,000 wire transfer was paid in cash, they said.

A state audit report dated July 15, 2015, found Ecclesia College received $592,500 in General Improvement Fund money from the Northwest Arkansas Economic Development District between 2005 and 2014. The district distributes Improvement Fund grants but, according to court testimony, largely did so at the direction of state legislators who provide the money through the state's budget.

That method was found unconstitutional by the state Supreme Court last year.

Woods and former state Rep. Micah Neal of Springdale were responsible for $550,000 of those grants to the college. Later, grants from other districts were shown to bring that total to $715,500. Neal pleaded guilty Jan. 4, 2017, for his role in the scheme and testified against Woods. Neal is set for sentencing next week along with Oren Paris III, former president of Ecclesia who pleaded guilty in April.

AmeriWorks, a nonprofit company incorporated by Cranford, received $400,000 from the Northwest District in 2013, all at Woods' and Neal's request. Cranford pleaded guilty in federal court in Missouri earlier this year in a related corruption case. He awaits sentencing.

Ecclesia and AmeriWorks each received more from the Harrison-based district than any other public entity or nonprofit group except for a district-wide program to insulate the homes of impoverished Arkansans, audit results show.

Woods grew up in Springdale and graduated from the University of Arkansas, Fayetteville with a degree in marketing in 2002. He was working as a loan officer at a bank when first elected to the state House in 2006. At the time, he was also a member of the rock band A Good Fight.

He served three terms in the state House before defeating incumbent Sen. Bill Pritchard, R-Elkins, in 2012. He did not run for re-election in 2016, but collected the largest amount of per diem, mileage and other expense payments among senators that year at $33,692.