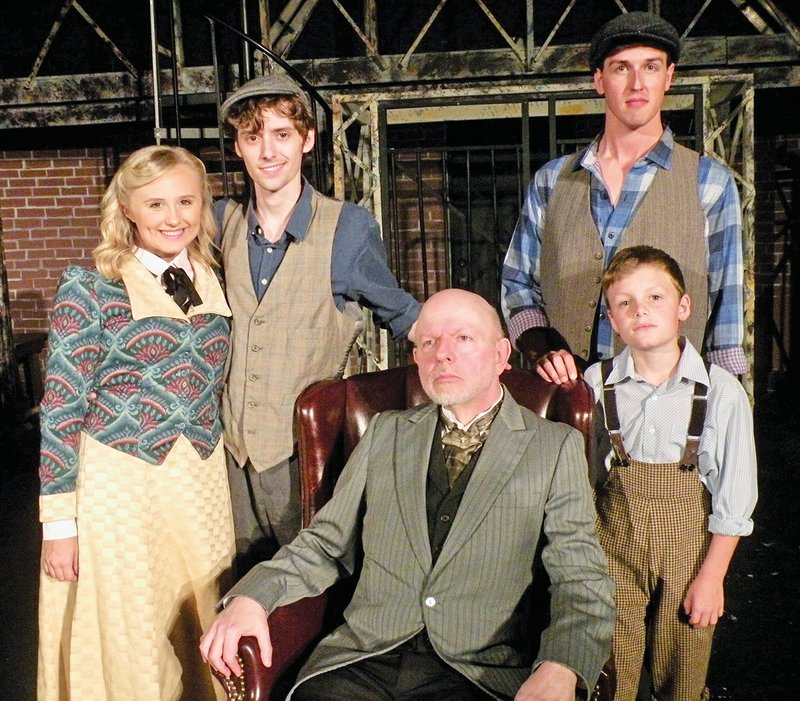 Appearing in the Young Players’ upcoming production of Disney’s Newsies the Musical are, from left, Makayla Shipe, who appears as Katherine Plumber, the young journalist; Ethan Patterson as Jack Kelley, leader of the Manhattan newsies; John C. Thompson, seated, as Joseph Pulitzer; Mark A. Burbank as the newsie Davey, back; and John Isaac Small as Les, Davey’s younger brother, who has also joined the newsies.

BENTON — The story of the historical newsboy strike of 1899 in New York City will come to life beginning Saturday, when the Young Players present Disney’s Newsies the Musical at the Royal Theatre in Benton. Showtimes are at 7 p.m. Saturday and Sept. 22 and 29; and at 2 p.m. Sept. 16, 23 and 30.

The musical tells the tale of the newsboys — known as newsies — who form a union and lead a strike against the publishing giant Joseph Pulitzer for raising distribution prices of his newspaper, The World, at the newsboys’ expense.

“We are the first community theater to do this show in Arkansas since it became available to community theaters on March 1,” said Daphne Shoppach of Benton, director and co-founder of the Young Players.

“When my kids were little, back in the 1990s, we watched the movie Newsies, with Christian Bale, over and over. Then the stage version, Newsies the Musical, came out in 2012 on Broadway,” she said.

“I said, ‘I want to direct that someday,’” Shoppach said, laughing.

“I took 40 kids to see it when the Broadway tour came to Dallas. And now that it is available to community theater, we are presenting it here in Benton,” she said.

“This is a big cast … a crazy big cast. It’s mostly kids playing kids. There are some adult mentors in the show, as well as some young adults who are still part of the Young Players,” Shoppach said.

“Disney’s Newsies the Musical is based on historical events,” she said. “It is a great teaching tool because it gives the kids a chance to walk in the shoes of real-life heroes who were the age they are now. I hope this experience will have a lasting impact on the ways kids view history and show them how the choices they make today can have a lasting impact on future generations.”

Jo Murry of Little Rock is the musical director of the local production, and Jenny Johnston of Benton is the choreographer. Local producers are Michelle Griffis of Bauxite and Heather Kreulen of Benton, with stage management by Lexie Ellis of Bryant.

“I’ve always wanted to be in this musical,” said Patterson, who is 21 and a graduate of Little Rock Central High School. “This was one of the first musicals I ever watched on TV. My grandmother had a VHS copy of it, and we watched it over and over. I knew if it ever made it to the stage, I wanted to be a part of it. And then when the rights were released for community theaters and I learned the Young Players were going to do it, I had to have a part in it. Even if I had to just work backstage, I wanted to be a part of it.

“My character, Jack, cares deeply about his fellow newsies. To him, it’s all about being fair. He wants them to get a fair deal. And when the newsies get threatened for what they’re doing, Jack ‘ain’t havin’ it.’ He believes in standing up for what is right.”

Patterson has been involved with shows at the Royal since he was 18, appearing most recently in Sweeney Todd: The Demon Barber of Fleet Street. Patterson said Newsies may be his last appearance at the Royal Theatre for a while, as following the close of the show, he will leave for a six-month stay in Spain, where he will be an au pair.

Jack Clay of Bryant plays Crutchie, a dedicated newsie with a bum leg that helps him sell more newspapers. Clay appears onstage with a crutch that he and his dad, Jeremy Clay, drama teacher at Bryant High School and a longtime supporter of they Royal Theatre, made recently.

“Crutchie is the eternal optimist,” Jack Clay said of his character. “He doesn’t let anything get to him.”

Clay, 15 and a 10th-grader at Bryant High School, is a veteran of the Young Players’ productions, appearing most recently in Thoroughly Modern Millie Jr.

Mark A. Burbank of North Little Rock plays Davey, who starts selling newspapers to help his family earn a living but gets caught up in the fervor of the strike.

“This is a fun show,” said Burbank, who is assistant director at The Studio Theatre in Little Rock and finishing up his senior year at the University of Central Arkansas in Conway, where he is majoring in theater. “But this will probably be my last appearance with the Young Players, as I am 23 and aging out this year. I’ve been in shows here since I was 8, and this is my 15th year with the Young Players.”

John C. Thompson of Benton appears as Pulitzer in the upcoming musical.

“I am a co-founder of the Young Players, along with Daphne and others,” said Thompson, who is retired after 30 years with the Baptist Health System in Little Rock and North Little Rock. “I’ve been involved in theater since I was 14 and in Little Rock. When we moved to Benton to raise our family, I got involved with the Young Players in 1997-98. Since then, more and more kids have become involved. There is so much young talent here — it just blows my mind.”

Appearing as other newsies are the following:

• Luke Ferguson of Benton is Albert.

• Noah Lee of Haskell is Mush.

• Justin Pike of Little Rock portrays the deli owner, Jacobi, and Wiesel, who runs the distribution window for The World.

• Koty Mansfield of Benton plays Snyder, the warden of the orphanage where many of the newsies live or once lived.

• Matthew Mayfield of Bryant is Bunsen, the bookkeeper for Pulitzer.

• Greg Blacklaw of Benton portrays Seitz, editor of The World.

Tickets for Newsies are $15 for adults; $12 for senior citizens, members of the military and college students; and $6 for high school students and younger. Tickets can be purchased online at www.theroyalplayers.com or www.ticketleap.com.