Rain, wind of Olivia closing in on Hawaii 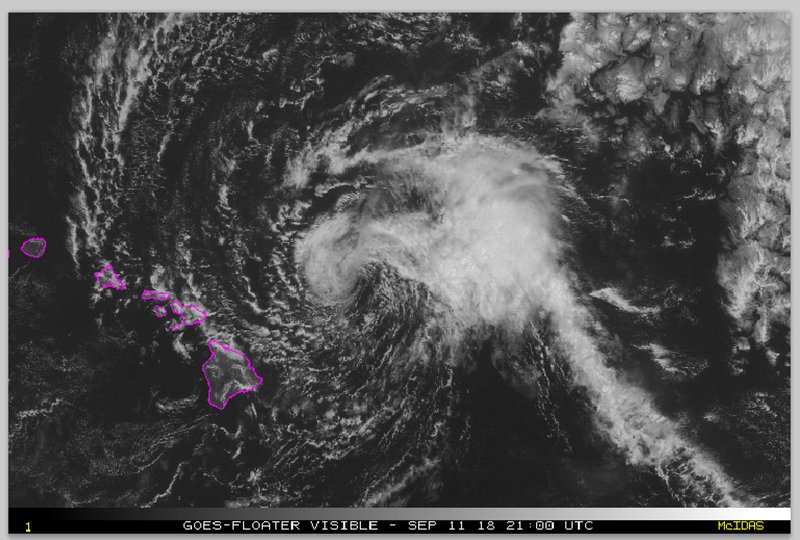 HONOLULU -- Tropical Storm Olivia began dropping light rain Tuesday on Maui and the Big Island as it approached the state and prompted warnings for residents to store drinking water and prepare for possible power failures.

The storm could dump as much as 20 inches of rain on some parts of the islands, said meteorologist Matthew Foster of the Central Pacific Hurricane Center.

Gov. David Ige asked President Donald Trump on Tuesday to declare an emergency for the state.

Ige is seeking help from military aircraft to fly people between islands if that becomes necessary. He also asked for help with potential medical evacuations and emergency power generation.

Olivia was a couple hundred miles east of Maui and packing winds of 60 mph. Maui and Oahu counties appeared most likely to experience the worst impacts, Foster said.

The owner of the only hardware store in the small town of Hana on the east side of Maui said he was determined to stay open as long as possible to help people prepare.

"If people need to get tarps or screws or anything for their home, I think it's important for us to try to stay open as much as possible, without jeopardizing the well-being of our staff," said Neil Hasegawa, owner of Hasegawa General Store.

The storm was expected to affect Hana starting Tuesday night, and residents were bracing for the town, with a population of 1,200 people, to take the brunt of the storm, Hasegawa said.

Those who prepared for Hurricane Lane have largely left those preparations in place for Olivia, he said.

"I think they're even taking it more seriously than Lane," Hasegawa said. "You can see the track going ... it's like barreling down on this eastern end."

Hana is a popular day-trip destination for travelers staying in Maui's resort towns. But Hasegawa urged people who don't need to be in Hana to stay away because they could become trapped and take up limited shelter space.

He also wouldn't say whether the resort was full, but he noted there had been several cancellations.

Print Headline: Rain, wind of Olivia closing in on Hawaii