Security along on '16 trips by Arkansas AG 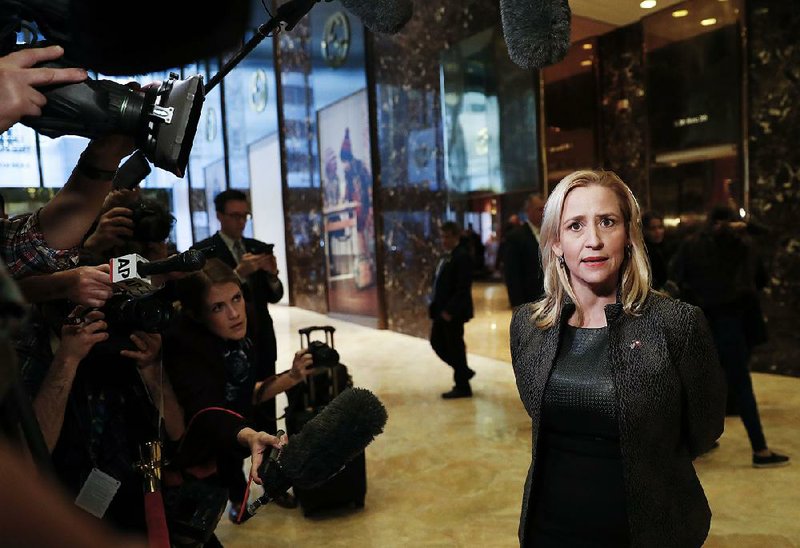 As Arkansas Attorney General Leslie Rutledge prepared for her two-week trip to the national convention host cities of Cleveland and Philadelphia in the summer of 2016, law enforcement officials in her office offered a warning.

According to a memo released to the Arkansas Democrat-Gazette by the attorney general's office, Rutledge's Special Investigations Division recommended that she travel with a minimum of three to four agents in two vehicles -- one rented and one from the state's fleet -- during the initial leg of the trip to Cleveland, where she was to deliver a prime-time address to the Republican National Convention.

Just a few weeks before, a sniper in Dallas had shot and killed five police officers near the end of a demonstration. While the memo did not address that event specifically, it warned of "recent political protests and demonstrations have turned violent resulting in the destruction of property and loss of life."

Rutledge's public appearances, the assessment noted, would raise her profile and make her "a more favorable target."

Rutledge, a Republican now running for re-election to a second four-year term, traveled with a security detail of three agents while in Cleveland and later with two in Philadelphia. The officers drove the state's Chevy Suburban round trip from Little Rock, records show, racking up thousands of dollars in mileage costs, hotel rooms and per diem expenses.

Rutledge flew commercial to both conventions, according to her campaign, and her costs were not reimbursed by the state.

That trip -- as well as a similar one, with a smaller detail, made the following January to attend the inauguration of President Donald Trump -- has become fodder for criticism in the campaign.

The Democratic Attorneys General Association is preparing to release an online video critical of Rutledge's travel record, a spokesman confirmed this week. The director of that group, Sean Rankin, released a statement Thursday accusing Rutledge of "improper, self-serving behavior."

Rutledge is the chairman of the Republican Attorneys General Association, drawing national interest to her re-election campaign.

"Maybe one" security member would be necessary, Lee speculated. "There may be good reasons for security, but when it's purely [for] political purposes it doesn't make sense."

Asked why the attorney general went through with the 2016 trip in light of the security threats and added costs, a spokesman for her office noted that Rutledge served as a delegate to the Republican National Convention as well as a member of the Platform Committee.

"Attorney General Rutledge believes it is important for Arkansas to have a voice at the national level," the spokesman, Amanda Priest, said in an email.

Priest declined to make Rutledge or the agent who prepared the assessment available for an interview.

While Rutledge had an active role in the July 18-21 Republican National Convention -- her speech alleging "careers of corruption" by former President Bill and Hillary Clinton aired on prime time and was picked up by local news and Time magazine -- it's unclear to what extent she promoted the state in Philadelphia during the Democratic National Convention, where Hillary Clinton became the party's presidential nominee.

Rutledge's office declined to release copies of her schedule during the Democratic convention, which lasted July 25-28.

One article on the website CQ Roll Call mentions Rutledge's attendance at an event held at a warehouse arena in south Philadelphia where Republicans "went through their talking points savaging" Hillary Clinton, alongside a prop boxing ring. The article did not quote Rutledge.

Rutledge's office said it did not have any records related to McDaniel's security while he was in office.

McDaniel declined to comment for this article, saying he did not want to appear critical of the attorney general.

Rutledge succeeded McDaniel in 2015, and her office declined to release any additional memos related to her security detail -- other than the 2016 assessment -- citing the working paper's exemption provided under the state Freedom of Information Act.

The 2016 assessment was drafted by Drew Evans, an agent who served on Rutledge's security detail during the July 2016 trip.

The assessment recommended that an agent always be near the attorney general, another agent remain with the state vehicle at all times and the third agent use the rental car "as an advance car providing real time intelligence to other agents."

The rationale behind those precautions, according to the copy given to the Arkansas Democrat-Gazette, was that Rutledge's itinerary in Cleveland included "numerous events outside of the convention perimeter in downtown," which was being protected by the U.S. Secret Service.

"These events will likely be in close proximity to protesters which could increase the likelihood of an incident," the assessment stated.

In addition, the document asserted that "numerous groups have implied they will be openly carrying firearms during demonstrations."

Ohio does not prohibit people from openly carrying firearms in public, according to the National Rifle Association. Rutledge has stated that she believes Arkansas law allows for open carry.

State police agency also has the duty of protecting the lieutenant governor unless he declines it.

Print Headline: Security along on '16 trips by AG