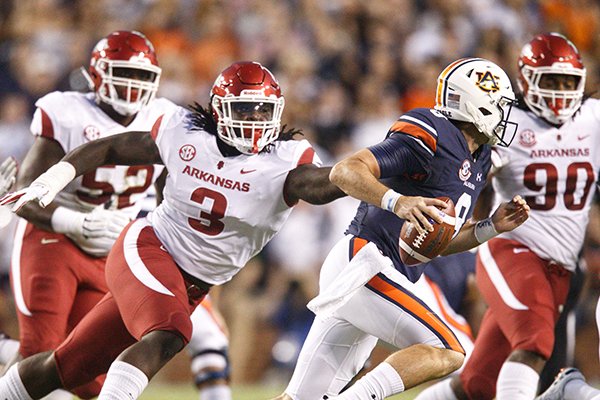 AUBURN, Ala. -- After the loss to North Texas, Chad Morris was more than unhappy. He was ticked off.

The University of Arkansas head football coach called his team together last Sunday and did exactly what his players needed. He chewed butt.

He was sick and tired of some of the things he was seeing and hearing, and he let his team know it wasn't acceptable or the way to win games.

A lack of discipline had been gnawing at him. The complaining about hard practices was getting on his last nerve. So he objectively critiqued his Razorbacks. Loudly at times.

Word of the meeting spread fast -- and while it may never be admitted -- it was exactly what Morris needed to do. On Saturday night, for the first time this season, the Arkansas Razorbacks showed improvement.

The Hogs were better everywhere but on special teams, which were un-special enough to handcuff the Hogs start to finish. The 34-3 score was not indicative of how well the Razorbacks played. Special-teams play dictated that final score.

Some, mostly Auburn fans, will say the Tigers were hungover from the 22-21 loss to LSU the previous week.

The truth was Arkansas was as good as Auburn. The defense played well enough to win, and the offense was better.

The defense was tossed in deep waters because of a lack of execution by special teams, but the unit fought cohesively perhaps for the first time this season.

Still, the Razorbacks couldn't have shot themselves in the foot more in the first half if they had extra clips of ammo.

Arkansas would have been better off to go for it on fourth down every time.

Malzahn, who had just beat rival Alabama, kept his cards close to his vest, but it was known around here he was wanting a contract extension and a raise. He also believes Auburn gives him his best chance to win a national championship.

After Saturday night, no one should say the Razorbacks didn't end up with the right coach.

Morris and defensive coordinator John Chavis had a great game plan. Arkansas didn't have enough sustained offensive drives, but the Hogs won the battle in the trenches and on many of the stats except the one that counts the most.

That one is in lights on the scoreboard and determines winners and losers.

Saturday night was not a moral victory for Morris. He doesn't believe in those.

What he believes in is hard work, performance and a winning attitude, and that message was made loud and clear last Sunday.

This season isn't over for the Hogs if they build off of last night's performances on offense and defense, but they have to get more mentally and physically tough. And special-teams play has to improve immediately.