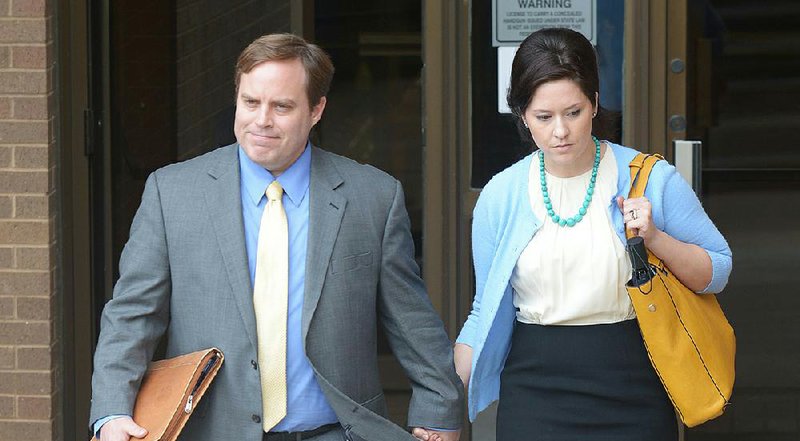 Former state Sen. Jon Woods of Springdale arrived at FMC Fort Worth, a low-security federal Bureau of Prisons facility in Fort Worth at 1 p.m. Wednesday, the law firm that represents Woods confirmed.

Woods is appealing his conviction on 15 fraud-related counts involving kickbacks in return for Arkansas General Improvement Fund grants. The charges consisted of one count of conspiracy to commit fraud, one count of money laundering in the purchase of a cashier's check, and 13 counts of mail or wire fraud.

A judge denied his motion Monday to remain free on bond pending his appeal. Woods was sentenced to 18 years and four months in prison to be followed by three years of probation.

Woods and co-defendant Randell G. Shelton Jr. of Kemp, Texas, were convicted May 3. Shelton was convicted of 12 counts and sentenced to six years. Shelton does not have to report to the prison bureau until Oct. 8.

The jury found that Woods and Shelton conspired with Oren Paris III and then-state Rep. Micah Neal of Springdale to steer state grants to Ecclesia College, of which Paris was president. Paris then paid kickbacks to Neal and Woods through consulting fees paid to Shelton's business.

Shelton is also appealing his conviction.

In a related matter, U.S. District Judge Timothy Brooks denied Shelton's motion to have the amount of property forfeiture he is ordered to pay reduced from $664,000 to $267,500, the actual amount Shelton's company received in payments from Ecclesia College. Brooks issued a court order denying the reduction Tuesday.

Paris and Neal pleaded guilty to one count each for their roles. Paris received a sentence of three years in prison while Neal, who cooperated early and extensively in the investigation, received probation for three years, which includes one year of house arrest.

Paris reserved his right to appeal in his guilty plea and is appealing, saying the charges against him never should have been filed.

Neal pleaded guilty to, and Woods was convicted in, another kickbacks-for-grants scheme involving AmeriWorks, a company founded by Arkansas lobbyist Milton R. "Rusty" Cranford and Missouri accountant David Carl Hayes. Both men pleaded guilty in federal court in Springfield, Mo., to embezzlement schemes. Shelton and Paris played no role in the AmeriWorks scheme, according to court documents.

The issues raised by defense attorneys in the appeals of Woods, Shelton and Paris will include destruction of evidence by FBI agent Robert Cessario, who testified that he wiped the memory of his FBI computer that was used to gather evidence in the case.

That evidence was available, however, on a computer of Neal's defense attorney.

Woods also was sentenced to pay more than $1.6 million in restitution, a $1,500 special assessment and to forfeit $1 million in assets.

He declined to testify on his own behalf or to make a statement during his trial and sentencing.

Woods is a first-time offender, but his crimes show a high level of sophistication and eagerness to profit off the public's trust, Brooks told Woods in explaining why he was rejecting Woods' request for leniency.

"I think your mentality has evolved to the point that I think you have some serious criminal mentality issues" and would return to fraudulent behavior if given a light sentence, the judge told Woods.