Arkansas Works deadline looms; health coverage at risk for many 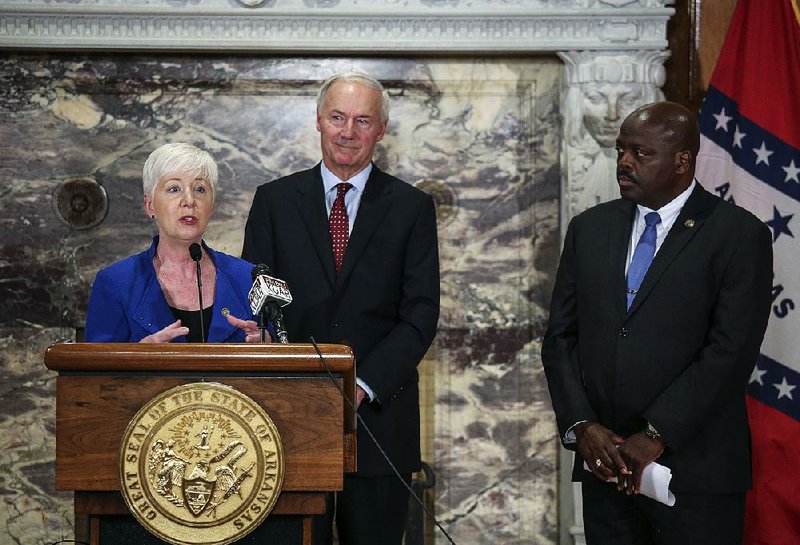 Thousands more Arkansas Works enrollees will lose their insurance coverage Monday unless they move into compliance with the program's work requirement today.

The enrollees must spend 80 hours a month on work or other approved activities unless they qualify for exemptions. Those who fail to meet the requirement for three months during a year lose their coverage for the rest of the year.

More than 4,500 enrollees initially lost coverage in the first round of terminations on Sept. 1.

As of Sept. 21, an additional 4,662 enrollees had accumulated two months of noncompliance and had not yet met the requirement for September, according to the state Department of Human Services.

Kevin De Liban, an attorney with Jonesboro-based Legal Aid of Arkansas, said the number shows that the requirement is a "termination trap" and that the state is "well on its way to terminating 15,000 to 20,000 Arkansans by the end of the year."

He blamed a lack of knowledge about the requirement, a lack of access to computers and the Internet, and difficulty using a state website to report work hours and exemptions.

"There is not an actual economic hand up here," De Liban said. "If the state were interested in helping people improve their economic position, the state would not take away people's health care, which is needed to be healthy in order to be able to work, and would have put increased investment in meaningful job programs."

Legal Aid is one of the groups that filed a lawsuit in Washington, D.C., in August arguing that U.S. Health and Human Services Secretary Alex Azar exceeded his authority when he approved the requirement.

In a speech in Washington on Thursday, Seema Verma, administrator of the federal Centers for Medicare and Medicaid Services, noted that the "vast majority" of Arkansas Works enrollees potentially subject to the work requirement are exempt from reporting because their incomes indicate that they are already working the required number of hours.

She also noted that more than 1,000 enrollees subject to the requirement have started new jobs since June.

"Imagine the impact that this has had on the lives of those individuals and their families," she said, according to a copy of her prepared remarks.

Arkansas in June became the first state to implement a work requirement for some of its Medicaid recipients.

The requirement applies to enrollees in Arkansas Works, which covers people who became eligible for Medicaid under the expansion of the program in 2014. The expansion extended coverage to adults with incomes of up to 138 percent of the poverty level. This year the income cutoff was $16,753 a year for an individual or $34,638 for a family of four.

Most enrollees receive the coverage through private health plans, with the Medicaid program paying the premiums.

At a news conference earlier this month, Gov. Asa Hutchinson said the provision is designed to increase the state's workforce participation rate and balance compassion with encouraging work and responsibility.

He said that some who lost coverage may have found other coverage or moved out of the state, while others "simply don't want to be a part of the workforce."

The work requirement is being phased in this year for enrollees age 30-49 and next year for those age 19-29. When it is fully implemented, it is expected to apply to more than half of the people on the program.

Those eligible for exemptions include enrollees who have children in the home or who are pregnant, full-time students, or in drug or alcohol treatment.

Of the 60,012 enrollees who were subject to the work requirement last month, 40,190 were not required to report their work hours because information in state records indicated that they qualified for exemptions or had incomes high enough that they were likely working the required amount of hours.

Those not automatically exempt had to use the state website, access.arkansas.gov, to report their hours or exemptions. Only 3,465 did so, leaving 16,357 who were out of compliance for the month.

Enrollees who lose coverage Monday can have it restored if they report their hours or exemptions during a five-day grace period that runs through Friday.

Of those who lost coverage on Sept. 1, at least 221 people later had their coverage restored, reducing the number who remained off the program to 4,353 as of Sept. 9.

Friday is also the deadline to report work hours or exemptions for August for enrollees who were prevented by a computer glitch from being able to use the state website on Sept. 5.

They can submit requests for a "good cause exemption" to the Human Services Department at a county office or by emailing the request to AWgoodcauserequest@dhs.arkansas.gov.

The request should contain the information on the work hours or exemption for August that the enrollee had attempted to report, according to the department.

Those set to lose their coverage Monday include almost 3,000 customers of Arkansas Blue Cross and Blue Shield and 521 in plans offered by Little Rock-based QualChoice Health Insurance.

Both companies said they have been attempting to reach the enrollees through calls, letters, emails and text messages. QualChoice also has two employees who visit the homes of customers who have two months of noncompliance to try to help them keep their coverage, company spokesman Terri Parker West said.

The two companies and St. Louis-based Centene, which also offers Arkansas Works plans, have employees who are trained to report exemptions or work hours on behalf of enrollees.

A Centene representative didn't respond to an inquiry Friday about how many of its customers stand to lose coverage.

So far, the three plaintiffs in the lawsuit challenging the requirement have been able to keep their coverage, De Liban said. Two of them received two-month exemptions for a "temporary incapacitation" due to their health conditions, and one, a self-employed handyman, reported the required number of work hours.

Bo Ryall, chief executive of the Arkansas Hospital Association, said he hasn't yet heard of an increase in uninsured patients showing up at emergency rooms but expects to eventually.

"As these folks need services, either in a physician or an emergency department setting, they'll show up and realize their insurance is not there any more," he said. 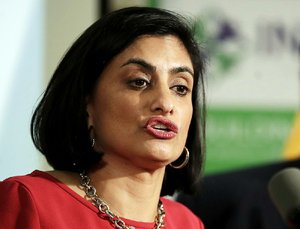 Photo by AP file photo
In this Nov. 29, 2017 file photo, Seema Verma, administrator of the Centers for Medicare and Medicaid Services, speaks during a news conference in Newark, N.J.

Print Headline: Deadline looms; health coverage at risk for many