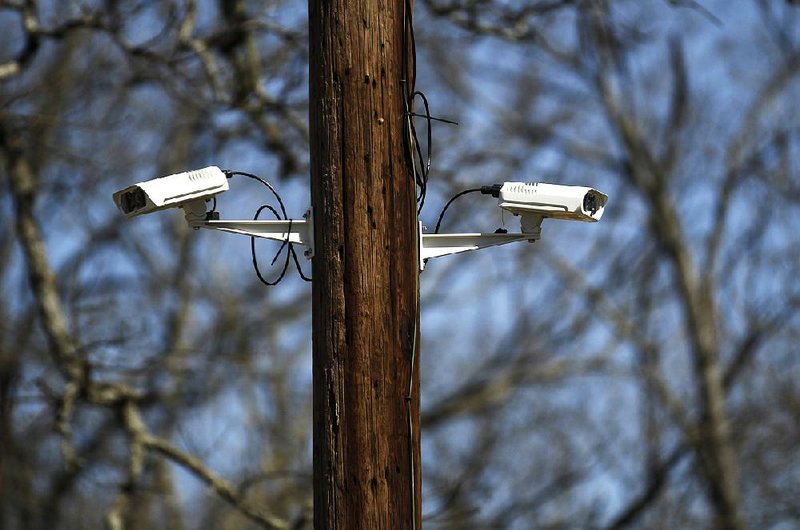 The two cameras that gather data for a license plate reader are seen last month on West 12th Street in Little Rock.

Few Little Rock residents knew that the Police Department employed license plate readers until one of the devices identified a Nissan Altima as stolen minutes before a fatal officer-involved shooting in February.

Though license plate readers and surveillance cameras, which police used to track the stolen Altima once it was spotted, are far from new, police technology has advanced in recent years. Surveillance cameras can be programmed to recognize faces or suspicious behavior. Gunshot detection systems notify police of crimes, sometimes before residents do. Police departments have matched DNA from genealogy-tracking websites to DNA found at crime scenes.

Each new promise of fortified investigative power, however, can come at the risk of citizens' privacy, some researchers say.

"It's one thing to have the technology, and it's another to have it without the policies and procedures in place to regulate that technology," said Andrew Ferguson, a professor of law at the University of the District of Columbia.

"Big-data policing is a change in power. It gives police more power -- sometimes at the expense of the citizens. If it's used without regulations and policies, it can be abused."

TOOLS OF THE TRADE

The Little Rock Police Department purchased eight license plate readers in August, spokesman Lt. Michael Ford said. The readers, which use cameras to capture and record license plate numbers on passing cars, are placed throughout the city and can be moved from time to time depending on crime trends and other factors, he said. 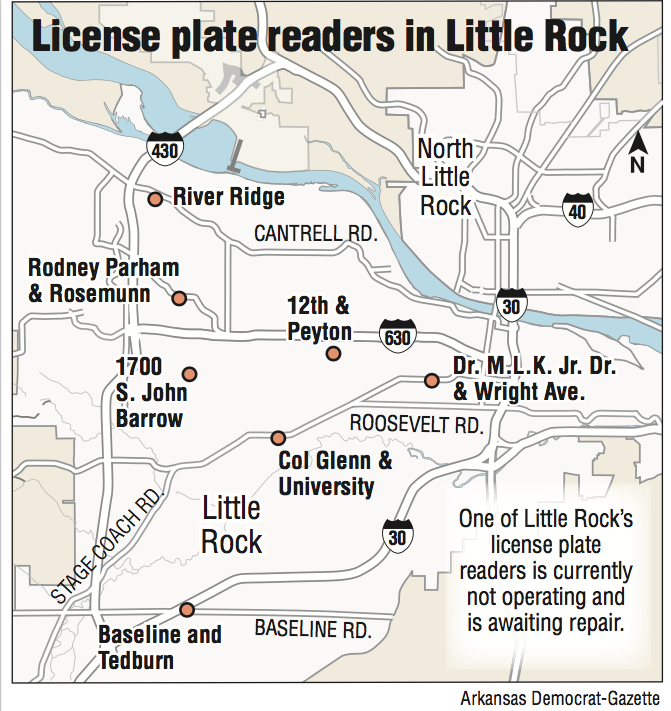 On Feb. 22, a plate reader detected a stolen vehicle on West 12th Street, and detectives used department cameras to track the car until it was parked near the intersection of West 12th Street and South Rodney Parham Road, according to department releases. Officers were then dispatched to the area.

Officer Charles Starks was the first at the scene. In the approximately 40 seconds that followed the officer's arrival, Starks shot at the driver, 30-year-old Bradley Blackshire, at least 15 times, killing him. Starks was injured when the vehicle that Blackshire drove struck him in his legs.

While the department's use of traffic cameras -- easily visible at intersections and along roadways -- has been widely reported, the relatively recent purchase of automated license plate readers has not been widely publicized.

"The public really only became aware of the tracking capabilities and prevalence of this equipment after Mr. Blackshire was killed," Rita Sklar, executive director of the American Civil Liberties Union of Arkansas, said in a statement. "We need greater transparency in technology and its use but we also need accountability for misconduct, dishonesty, and abuse of power."

With the swift rise of advanced technology in policing has come national attention on the way those tools are governed. When the use of familial searching -- which identifies potential subjects by matching DNA samples to family trees that are in some cases provided by genealogy services -- first came into the public sphere, researchers and privacy advocates said the process could produce false leads.

And it did, notably in the case of New Orleans filmmaker Michael Usry, who in 2015 was accused and later cleared in a 1996 Idaho slaying.

But the tool last year identified an Arkansas man in the 1990 rape and murder of a Faulkner County woman, and it led to the arrest of the man who investigators believe is the Golden State Killer in California.

The danger of the new devices and the data they collect is that there are not yet adequate laws to govern their use, said Kabrina Krebel Chang, clinical associate professor of business law and ethics at Boston University's Questrom School of Business.

"There's always dangers [with] new technology," Chang said. "It's a bit of a new frontier -- it's untested -- so there aren't laws that would apply, and sometimes we don't have laws until something bad happens and we don't want it to happen again. On some level, we don't know what the dangers are yet."

A 2016 survey from George Mason University's Center for Evidence-Based Crime Policy said more than 59 percent of all police departments in the country with more than 100 sworn officers employ license plate readers.

In central Arkansas, Little Rock and North Little Rock use the readers. The Arkansas State Police and the Pulaski County sheriff's office do not, according to their respective spokesmen.

The readers can help police track down missing or wanted people, report fictitious license plates and find vehicles believed to be involved in crimes, Ford said.

The readers can capture thousands of license plates per minute and save them to a database, Yigit said.

State law says only law enforcement agencies may use license plate readers, and only for the purpose of comparison with data held by the Arkansas Department of Motor Vehicle, the Arkansas Crime Information Center, the National Crime Information Center or a database created by law enforcement authorities for an ongoing investigation. The FBI may use the readers in Arkansas for any lawful purpose.

The Little Rock police's readers store the license plate data of each vehicle that passes for 150 days, Ford said. Some information may be kept longer if it is a part of an ongoing criminal investigation, according to Arkansas law.

Dave Maass, a senior investigative researcher for the Electronic Frontier Foundation, said the primary issue with automated license plate reader technology is how the data are kept and, in some cases, shared.

The San Francisco-based Electronic Frontier Foundation is a nonprofit focused on protecting civil liberties in the digital age, and one of Maass' areas of interest is the use -- and misuse -- of surveillance technology in policing.

Maass said the fact that Arkansas bans any private entity from using the license plate reader technology is a "huge step toward ensuring privacy," but that the collection for each license plate that passes usually means the vast majority of data the departments gather will be from civilians unrelated to any ongoing investigation.

In states that do not prohibit private entities from using license plate readers, Maass said, license plate data can be collected and sold on a broad level. This information can be sold to debt collectors, insurance agencies, advertising agencies or "any number of industries who may then make decisions about your life," Maass said.

The Little Rock license plate readers recorded 2,898 hits on vehicles reported as stolen in the 150-day period before mid-March, according to department data. Sgt. Angela Everett of the Little Rock Police Department included the caveat that some of these hits could have been vehicles that passed readers multiple times.

Ford said the department can share information from the readers with other law enforcement agencies, but only police in North Little Rock and Cammack Village have access to Little Rock's database.

The North Little Rock Police Department would not share the locations of its license plate readers, and a Freedom of Information Act request for the locations had not been fulfilled as of Sunday. Cooper said sharing the locations of the readers could impede future investigations.

"We do not haphazardly use this device," Cooper said. "It's an investigative tool. We only use it when we believe it could further an investigation."

The use of police surveillance tools, while not new, increased in Little Rock in 2013 with the purchase of 53 stationary cameras located throughout the city. The cameras cost approximately $5,600 each, for a total cost of $296,000, according to a release in response to a Freedom of Information Act request.

The department's surveillance cameras are clustered downtown, with approximately 15 cameras in an area between Main Street, Interstate 30, the Arkansas River and East Capitol Avenue. Approximately 30 cameras are south of Interstate 630 -- eight of which run along 12th Street. Only five cameras are placed north of I-630 and outside downtown. Those are in far west Little Rock. 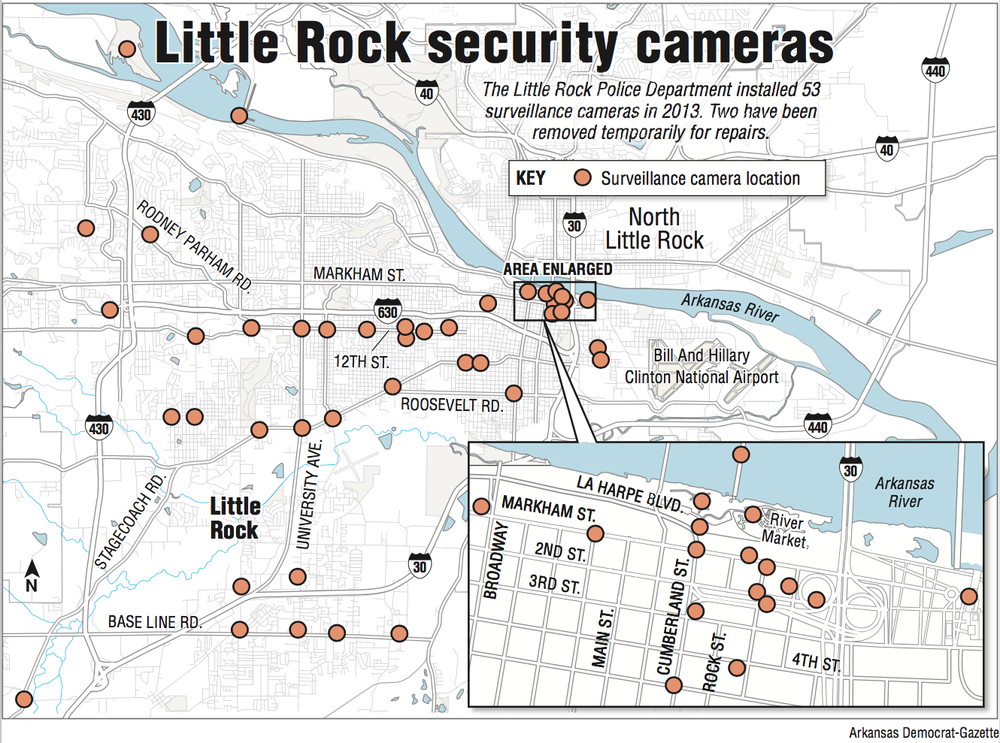 The city of Little Rock also has 11 cameras, but traffic engineering manager William Henry said these cameras are not recorded and are used for live-viewing only.

Henry said, via a statement in response to a Freedom of Information Act request, that the cameras' only use is to check traffic signals for failures or other problems.

Giovanni Circo, an assistant professor in the University of New Haven's Henry C. Lee College of Criminal Justice and Forensic Sciences, has researched the utility of surveillance cameras in Detroit.

Project Green Light Detroit, a focus of Circo's work, affixed surveillance cameras linked to the Police Department to more than 500 businesses since 2016. Each location has four to seven cameras, and analysts at the department monitor the live-feed continuously.

Circo has studied whether the presence of these cameras decreased crime. The results, he said, are complicated.

"What we see in Detroit and what we see in other places is that in general, closed-circuit TV cameras seem to reduce property crime," Circo said, noting that businesses with the cameras had moderate decreases in break-ins and thefts compared with before the cameras were installed.

And in the cases of smaller cities, Circo said, departments must weigh the benefit of surveillance against the cost of labor to keep the cameras under watch.

The big question, Circo said, is whether cities use these cameras to prevent crime or to solve it after the fact. Of course, he said, there is enormous investigative use in having video of crimes, but the vast majority of what's recorded will not be criminal.

"That's the big trade-off," Circo said. "There's still a sizable amount of people who are concerned that you can possibly be on camera as soon as you step outside of the house."

That trade-off -- security for a loss of privacy -- is a constant in most new forms of police surveillance, Ferguson said. The ability to automatically run license plates -- and dozens of other innovations in police technology -- means computers are doing police work "in a way that a human mind cannot do. That is starting to change the power of the police."

This change in power is not inherently bad or good, Ferguson said, but it is a shift that every community should have the chance to understand and agree to.

"I think the citizens of Little Rock should have a say in how those technologies are put in place," Ferguson said.

Maass agreed, saying their forms of surveillance should come before a board of directors or should be proposed to a community forum before their implementation.

"Communities should have control over the way they're surveilled," he said. "Give the city council the ability to really understand how the technology is affecting their community. Not only do they have an impact on the community's privacy, but cost a lot, too."

Each city should decide for itself how the technology is employed, Ferguson said, and what it's willing to sacrifice in the name of a possible improvement in security or crime-solving.

"Is this a function directed against minority communities or protesters? Is this a trade we're willing to make?" Ferguson said. "Those are the questions that transparency will answer. It's incumbent on the police departments to have those conversations on the front end, not after they get reported in a police story."