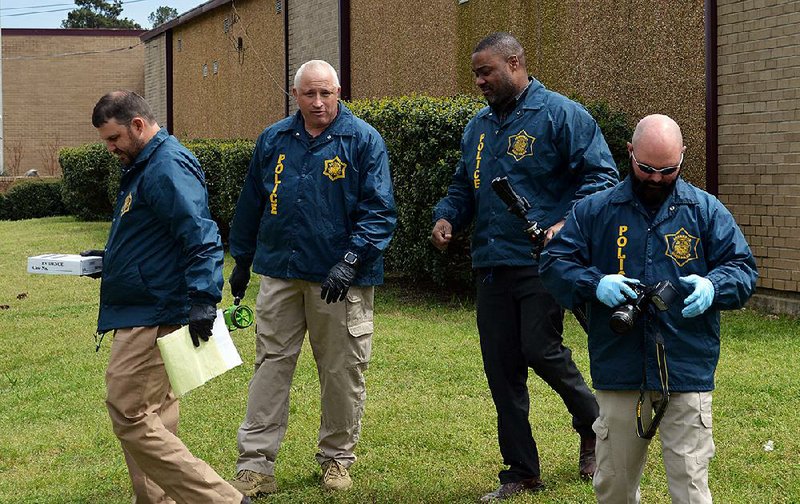 PRESCOTT -- A 14-year-old was hospitalized Monday morning when a classmate took a handgun to Prescott High School and shot him in the school's hallway, officials said.

Prescott Police Chief Joey Beavers said officers responded to the school about 9:15 a.m. to reports of a shooting. Police found one student suffering from a gunshot wound, and shortly afterward a suspect, also 14, was taken into custody.

No other injuries were reported, Beavers said.

"It was a student-upon-student incident. ... Everything was contained in just a matter of seconds," Beavers said during a news conference held outside the school.

Police declined to release the identities of either teenager involved in the shooting. Arkansas State Police responded to the scene and are assisting in the investigation. The Nevada County sheriff's office also responded.

The school district went into immediate lockdown after the shooting, and its resource officer was in the building at the time of the incident, Prescott Public Schools said in a statement released hours after the shooting.

"It appears this was a premeditated attack specifically targeting the injured student," the statement read.

The injured teen was in stable condition Monday afternoon after being airlifted to Arkansas Children's Hospital in Little Rock for treatment, officials said. A spokesman at the hospital confirmed the facility had received a patient from Prescott.

The school district released students later Monday morning. District officials said school will reopen today, and counselors will be on campus to provide services as needed.

Eight students have been injured and one killed in school shootings in the United States in 2019, according to national data compiled by Education Week. Five of the nine shootings happened in the South, with others in Minneapolis, Kansas City and Baltimore, according to the data.

School officials said the middle school student took a concealed handgun to the Prescott campus and shot the other student inside the high school building. Officers recovered the handgun from a bush in front of the high school. 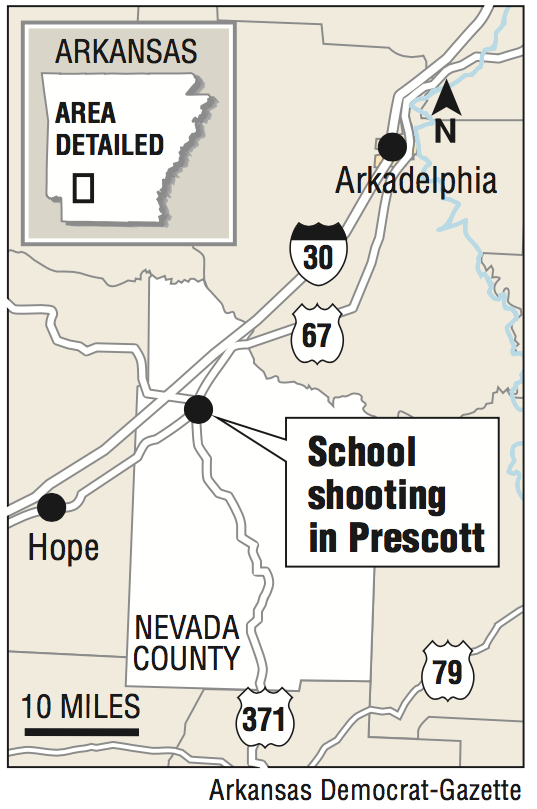 Cynthia Webb was inside the school checking on one of her twin boys when she heard a gunshot.

"I was sitting in the chairs outside the principal's office and I was looking at my phone when I heard the first pop and noticed some kids run out the back door," Webb said. "I stood up because I didn't know if I needed to run or not. I then looked at the lady in the office and she looked at me, and that is when [the victim] ran into the office saying he had been shot."

Webb said students were in the hallway changing classes at the time of the shooting. She said it seemed like most of the students acted as if they thought it might be an April Fools' prank.

"I went and followed the victim when he ran into the office and I could see the blood," Webb said. "I was trying to get the boy to calm down while others were trying to stop the bleeding because he was, understandably, freaking out a little bit. He then calmed down and started talking."

Webb said her sons are classmates with the two teens involved in the shooting.

"You hear about this kind of thing happening all over the world, but you would never think it would happen here," Webb said. "I still haven't really taken time to process."

Gladies Gulley lives across the street from the school and has three children who attend school in the district. She said she started praying when she heard the news.

"Five minutes after [the shooting] happened, I started hearing the news," Gulley said. "My phone started blowing up and things were just all over social media. I had a whole bunch of family members coming over here to get to their kids."

Gulley said she never received a message from the school explaining what was happening.

"I was dealing with anxiety, panic and nervousness," she said. "I was scared for my kids. Learning that it was an eighth-grader who did this ... that is shocking."

Webb said she witnessed the chaotic situation inside the school office as word got out that the school was on lockdown because of a shooting.

"The phones in the principal's office were steadily ringing," Webb said. "The secretaries had two phones in hand at all times trying to communicate with people."

Tamiko Milner, who has a child in the school district, said she believed the shooting might have been avoided if parents paid closer attention to their children's social media pages.

"I have seen the snaps [on Snapchat] where the kid was posting photos of himself with a gun and telling people what he was going to do," Milner said. "Nobody alerted the parents or the kids and it rolled over into this."

Multiple parents told the Arkansas Democrat-Gazette they thought the shooting stemmed from a fight between the victim and the suspect on Friday that was recorded and shared on social media by other students.

"These parents need to pay attention to their kids," Webb said. "Also the friends who saw this needed to tell someone when this first appeared on social media.

"This could have all been avoided, but now we have a kid in the hospital and another one who could be facing jail time." 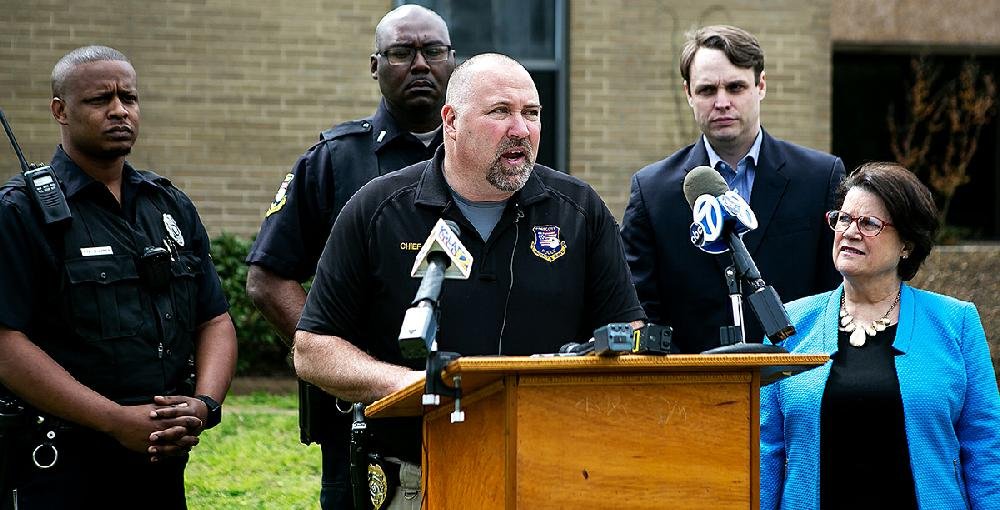 “It was a student-upon-student incident. ... Everything was contained in just a matter of seconds,” Prescott Police Chief Joseph Beavers said of Monday’s shooting at Prescott High School.

Gulley also suggested it was time for the school to consider a rule that would require all backpacks to be clear or mesh, like some other schools. District officials said they plan to review safety and emergency protocols following the shooting.

Christi McQueen, prosecuting attorney for Nevada County, said her office hadn't received a case file as of Monday afternoon and that no decision had been made whether to file charges against the suspect.

The shooting is the latest in a string of shootings on school and college campuses in Arkansas over the past 40 years.

"Our thoughts and prayers are with those affected by today's incident," spokesman Kimberly Friedman said.

"This is a tough time for our school and community," Poole said. "No school, community, city, or event is immune to bad things happening to them. It is our promise to continue to do everything we can to make sure our students and schools are as safe as possible."

Information for this article was contributed by reporters Youssef Rddad and Cynthia Howell of the Arkansas Democrat-Gazette.