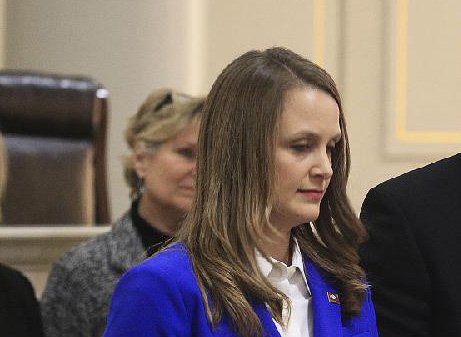 Rep. Megan Godfrey, D-Springdale, is shown in this photo.

A Senate committee on Wednesday cleared a bill to make nursing licenses available to Arkansans who were brought to the United States illegally as children.

House Bill 1552, sponsored by Rep. Megan Godfrey, D-Springdale, would allow the state Board of Nursing to issue licenses to recipients of the Deferred Action for Childhood Arrivals policy created by President Barack Obama in 2012.

The policy required "Dreamers" -- named for the never-passed DREAM Act, or Development, Relief, and Education for Alien Minors Act -- to be under age 31, to have arrived in the country before they were 16, to pass a criminal background check and to be in school or have a high school diploma or GED or to have served in the military.

HB1552 is designed to help aspiring nurses whose career plans were upended when the state nursing board stopped issuing licenses to DACA recipients in 2017.

Godfrey said it would also help address a shortage of nurses in the state.

Supported by Gov. Asa Hutchinson, HB1552 last month sailed through the House Committee on Public Health, Welfare and Labor with no dissenting votes and was then passed by the House in a 90-0 vote.

On Wednesday, the Senate Committee on Public Health, Welfare and Labor advanced it to the full Senate in a voice vote with no dissent.

Although he ultimately voted for the bill, Sen. Jimmy Hickey, R-Texarkana, said he would like to see an amendment requiring the nurses to apply for citizenship if they become eligible.

"I think the exception would be someone not wanting to seek that citizenship," he said.