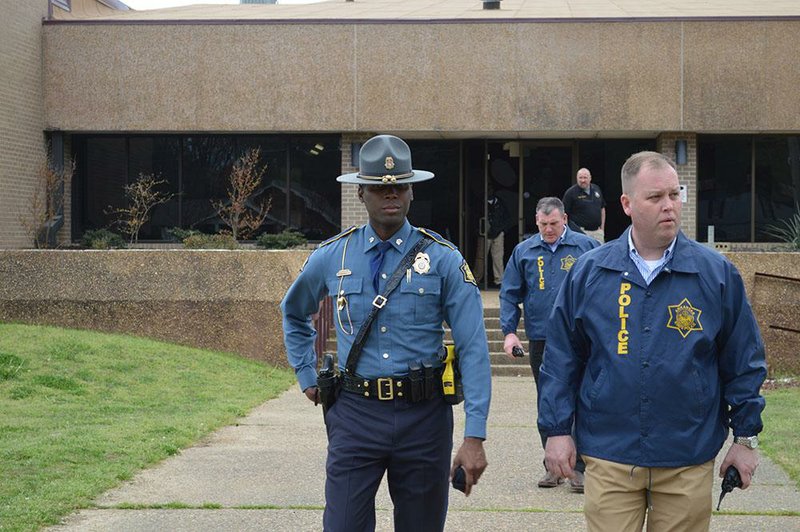 PRESCOTT -- Additional safety measures will be added in the near future in the Prescott School District after Monday's campus shooting, according to the district's superintendent.

Prescott School District Superintendent Robert Poole told parents and community members Wednesday night that district staff followed protocol in its effort to keep students safe after a 14-year-old boy was shot by another 14-year-old boy in a hallway of Prescott High School.

"There's a lot of things we're working on, and we want to let you know as a community we are on top of things," Poole said. "School security and student safety is the No. 1 priority of our school district right now. We are always welcome and open to suggestions you may have."

The shooting occurred shortly before 9:15 a.m. Monday. Officials said the middle school student took a concealed handgun to campus and shot the other student inside the high school building. Officers recovered the handgun from a bush in front of the high school.

The school district went into immediate lockdown following the shooting, and students were released from school later that day. Counselors were on campus when students returned Tuesday to provide services as needed.

The victim was airlifted to Arkansas Children's Hospital in Little Rock and is recovering. The suspected shooter was arrested. Police have not released the identities of the teenagers. No charges had been filed as of Thursday, according to Nevada County Prosecuting Attorney Christi McQueen.

Poole told the crowd Wednesday that additional safety measures used by the district will include a new phone app that parents and students can use to report any concerns, including bullying and threats.

Multiple parents told the Arkansas Democrat-Gazette on Monday they thought the shooting stemmed from a fight between the victim and the suspect on Friday that was recorded and shared on social media by other students.

The new app, which allows users to report concerns anonymously, will be ready within a couple of weeks, Poole said.

"You can notify the school anytime of a bullying situation, a threat, any type of thing that you think the school needs to know about," Poole said. "It gives notification to the superintendent, administrator. We get that information and we immediately look into that information.

Adding a third resource officer is also under consideration, and an election has been approved for Sept. 10 asking voters to approve a millage increase that would go toward security measures. The measures would include adding reinforced doors at the elementary, old gym and high school buildings.

"This will make sure we lock down any school building we have in a matter of seconds," Poole said. "Time is precious when you're in a lockdown situation, and you have a school shooting response situation. With your help, we can make sure that's possible."

The district also will get two-way radios for school buses and offices in about two weeks.

Poole encouraged parents to use the district's notification center to stay abreast of emergency events, including school lockdowns like the one Monday.

"We need your trust to make sure you do what we need you to do in these situations," Poole said. "In a lockdown situation, we cannot have you come up here to the school. There's a lot of reasons why ... you're making things worse when we've got several hundred parents coming to the school district at one time and there may be a shooter on campus."

"Lessons are learned from every school shooting," Beavers said. "We as law enforcement, as administration, we study these and we learn from them. Each time we have one of these, we learn something different and we pass it along."