A grave situation: Little Rock's historic, once-neglected Haven of Rest Cemetery gets help from its 'Friends' 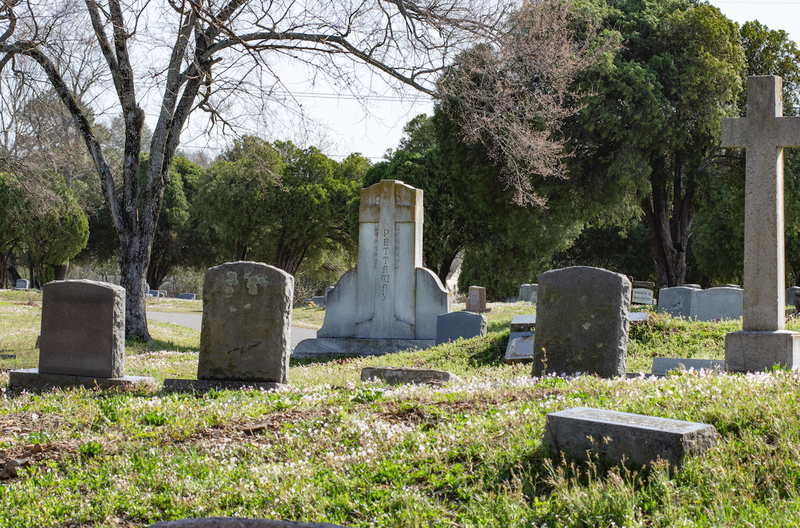 Headstones are grouped together in the older section of Haven of Rest Cemetery in Little Rock. The one in the center bears the name Pettaway. (Arkansas Democrat-Gazette/CARY JENKINS)

Very close to the center of Haven of Rest Cemetery in Little Rock is a boulder with a plaque commemorating the 21 boys who perished in the March 5, 1959, fire at the Arkansas Negro Boys Industrial School in Wrightsville.

It took 50 years for the plaque to be installed. Although 21 boys died in the fire, the 14 whose bodies could not be identified were buried in an unmarked mass grave at Haven of Rest. 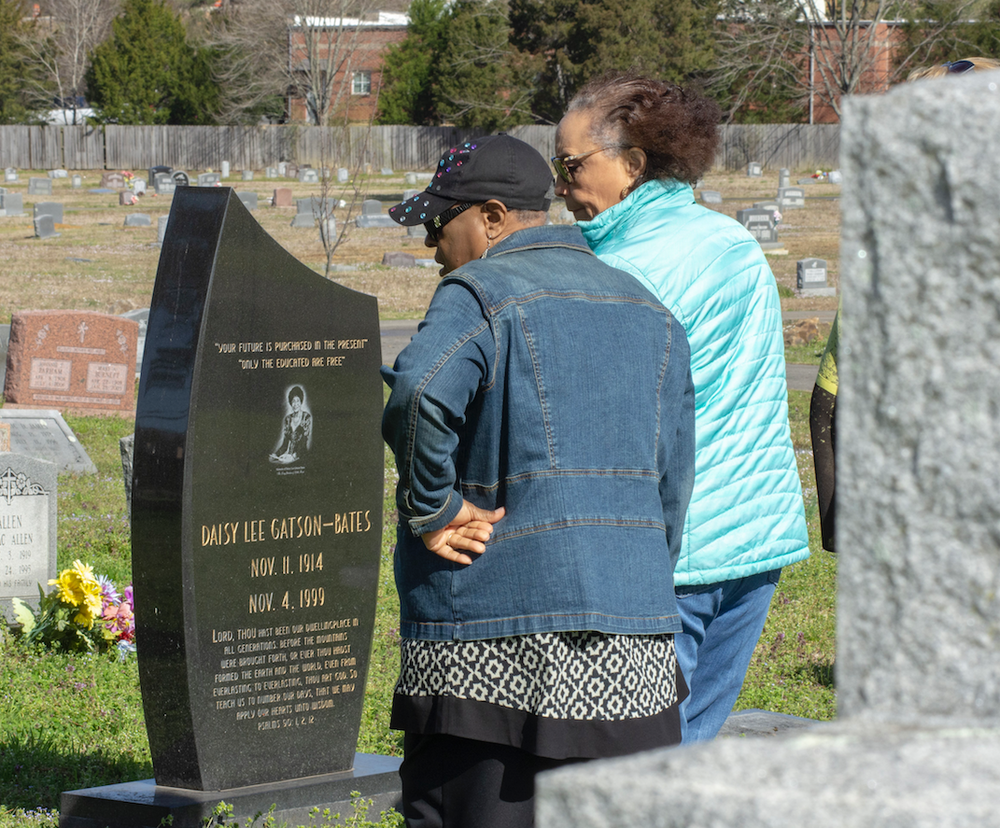 Near the entrance of the cemetery -- at 7102 W. 12th St. -- lies a modern marble tombstone at the head of the grave of Daisy Gatson Bates, the legendary civil rights activist, publisher, journalist and lecturer.

Right of the main entrance is the grave of Scipio Africanus Jones, who is remembered as the attorney who represented 12 black sharecroppers who were sentenced to death for their part in the 1919 Elaine Race Massacre. Jones won their release.

The Pine Grove section of the cemetery -- toward the west -- is the resting place of more than 450 black residents who were moved from the Odd Fellows Cemetery in North Little Rock to Haven of Rest in 1961 to make way for a Holiday Inn. 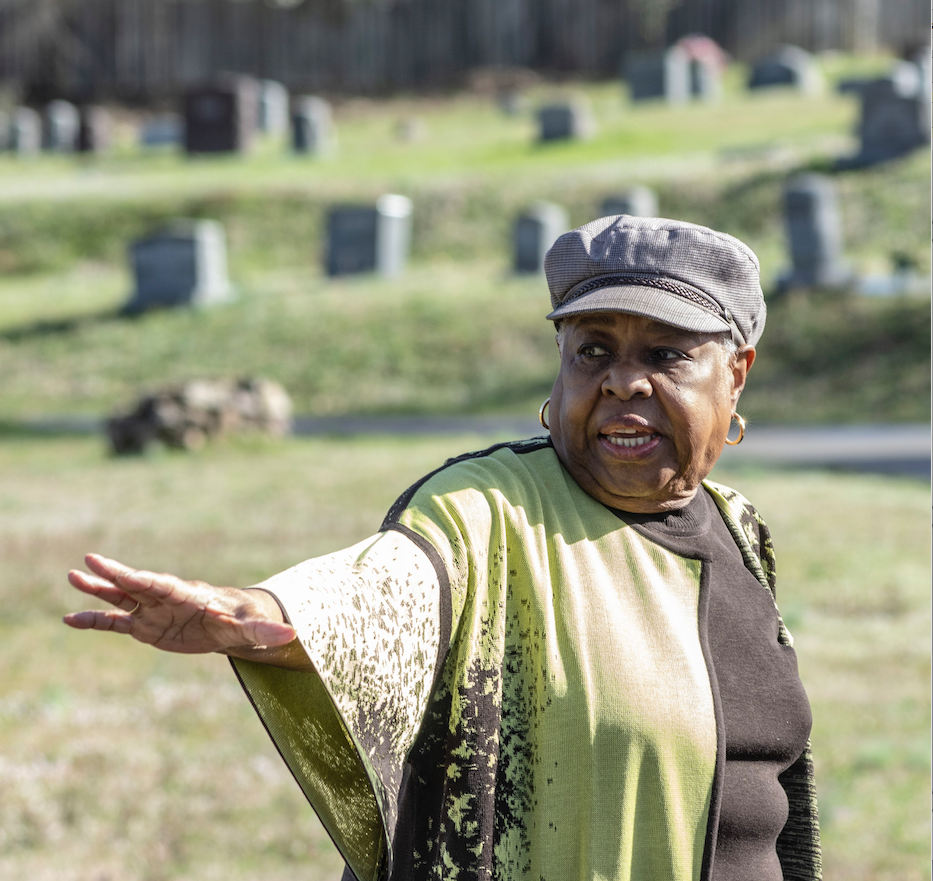 Former state Sen. Irma Hunter Brown has worked for years to preserve Haven of Rest Cemetery, a black cemetery on 12th Street in Little Rock. She and other Friends of Haven of Rest Cemetery Inc. members and supporters have raised funds, cut down overgrown shrubbery, paved roads and other tasks to restore the 17-acre site that is the final home to more than 12,000 black Arkansans. (Arkansas Democrat-Gazette/CARY JENKINS)

In all, more than 12,000 people are buried at the historic 17-acre Haven of Rest Cemetery. Irma Hunter Brown, the first black woman to be elected to both houses of the Arkansas Legislature, says Haven of Rest is the oldest predominantly black cemetery in Arkansas.

Established in the early 1900s, the cemetery is the final resting place of people "from all walks of life" -- from domestic workers to professors, lawyers and doctors, Brown says.

[MAP: Map of the Haven of Rest Cemetery]

Research is ongoing to determine the precise age of Haven of Rest. The earliest marker bears a death date of March 16, 1903, according to Barbara Clark-Lawrence, the author of Lay Down My Burdens, African American Cemetery Inscriptions. The marker with the earliest birth year is 1841.

"There are so many, many notable African Americans from Arkansas buried there," said Lottie Shackelford, who became the first female mayor, as well as the first black female mayor, of Little Rock in 1987. "It is the only solely black cemetery in Little Rock proper."

A few spots are still available, but the cemetery is no longer able to sell enough plots to make it self-sustaining. Over the years, the cemetery became overgrown and flooding is a common problem.

"We are late in the game in the sense of trying to restore it to it's original grandeur," Shackelford said.

In 1955, Haven of Rest was accepted as a perpetual care cemetery by the Arkansas Cemetery Board. It is one of 104 perpetual care cemeteries in Arkansas under the jurisdiction of the board. When an internment was bought, a percentage of the money was put into a trust for maintenance and care of the cemetery. But only interest earned by the trust can be used for repairs and with fewer spots for sale, less money is available. 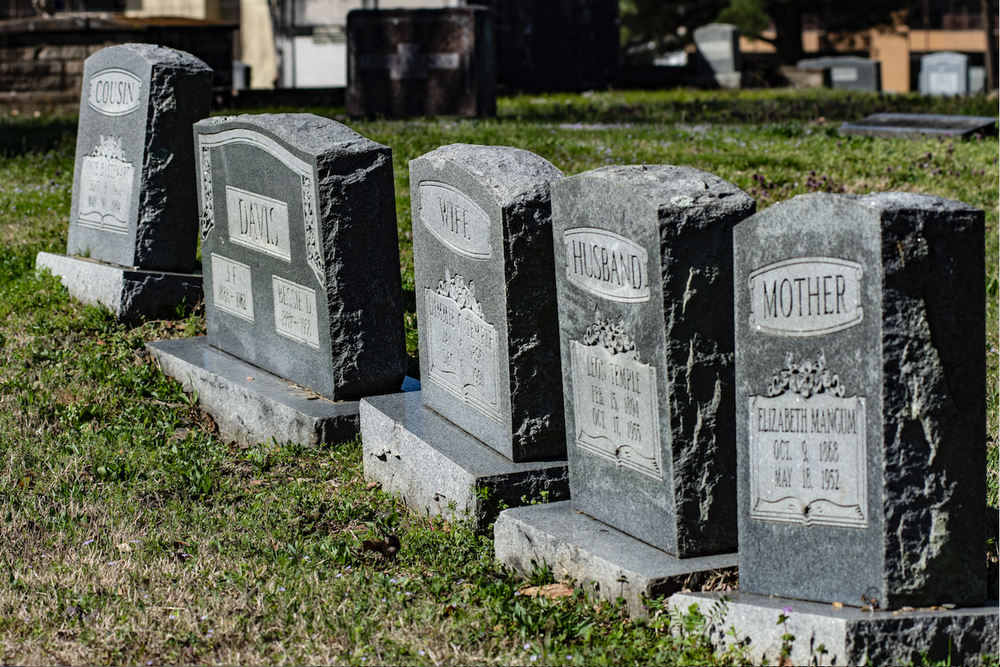 The Davis family tombstones — Cousin, Davis, Wife, Husband and Mother — form a row at Haven of Rest Cemetery in Little Rock. The oldest is Mother — Elizabeth Mangum — who died May 18, 1952. (Arkansas Democrat-Gazette/CARY JENKINS)

After years of neglect and financial trouble, Haven of Rest lacked a clear owner. In 2001, the Cemetery Board asked it to be put in the hands of a court-appointed receiver. The cemetery is now owned by Finality LLC.

"It was just shameful that it had gotten so bad," Brown said of overgrown plots, disrepair and problems with flooding. "Coffins were coming up out of the ground."

The group continues to try and raise money for upkeep and repairs. With the funds, the group has leveled grave sites, identified gardens and resurfaced roadways throughout the cemetery. 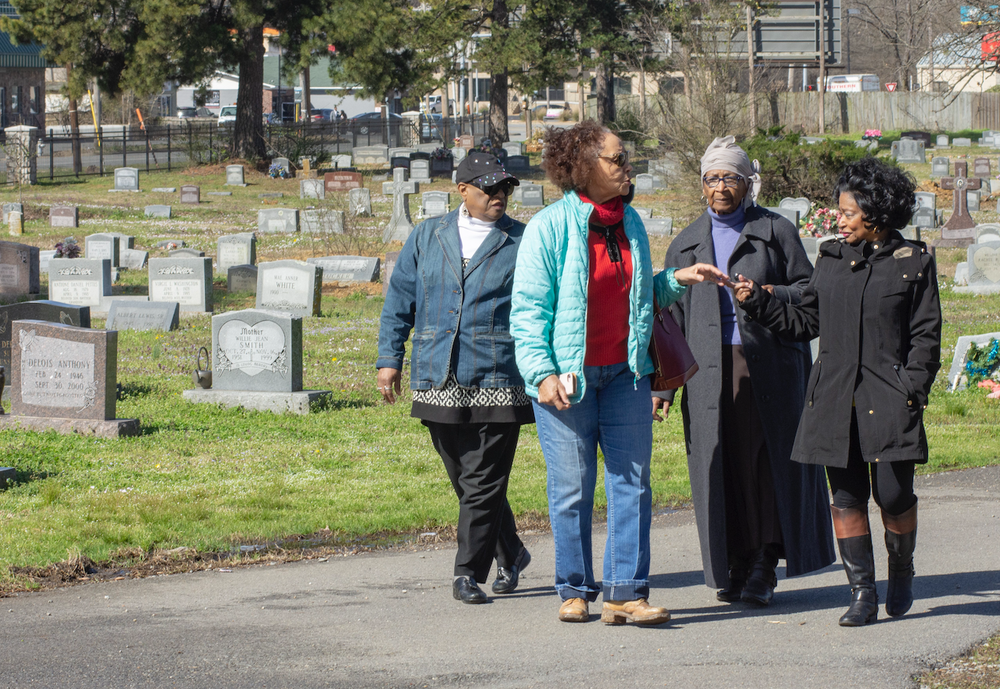 Eleanor Stephenson (from left), Sammie Holmes, Maud Woods and Patricia Brewer recently toured Haven of Rest Cemetery in Little Rock. The women are members of Friends of Haven of Rest Inc., a group formed to preserve and maintain the cemetery. (Arkansas Democrat-Gazette/CARY JENKINS)

On a recent windy day, Brown and four other members of Friends of Haven of Rest -- Eleanor Stephenson, Sammie Holmes, Maud Woods and Patricia Brewer -- toured the cemetery. Recent rains made the grounds soggy. Water ran through a creek near the final resting place of the majority of the boys who died in the Wrightsville fire. Many tombstones have tilted, possibly due to flooding.

Supporters of Haven of Rest have tried to place the cemetery on the National Register of Historic Places. In 2005, the Arkansas Department of Heritage conducted a survey and found the cemetery was not eligible for placement.

Melissa Whitfield, communications director for the Department of Heritage, said the request was denied because too many modern burials were mixed in with historical burials and there is no section that is set aside only for historical monuments and tombstones.

Friends of Haven of Rest can reapply for the distinction, she said, pointing out it has been 14 years since the request was made.

The early morning hours of March 5, 1959, were wet and cold at the Arkansas Negro Boys Industrial School in Wrightsville. The only warmth inside the older boys' dormitory came from wood burning in an oil drum. Around 4 a.m. the boys smelled smoke. The doors were locked from the outside and no adults were on duty to unlock the doors. Forty-six boys were able to escape by kicking out steel mesh screens on the windows. Some of the survivors said fights broke out between the boys trying to escape.

Twenty-one boys perished in the fire. The boys ranged in age from 13 to 17 and most were confined for petty crimes. No charges were ever filed in the case.

The monument installed by the Friends of Haven of Rest Cemetery at the mass grave of the 14 boys who could not be identified pays homage to all 21 victims.

In 1891, the Grand United Order of Odd Fellows bought land at 27th and Orange Streets in North Little Rock's Military Heights, a predominantly black neighborhood, for $1,050 to create a cemetery to bury local black residents. The history of the Odd Fellows in the United States dates to the 1840s when lodges opened up around the country. The predominately black order offered benefits such as defraying the cost of burial, sickness, disability and widowhood, according to research by Virginia Commonwealth University.

The cemetery was razed in 1961 to make way for a Holiday Inn that opened in 1963. A year earlier, more than 450 bodies were removed from the Odd Fellows Cemetery and eventually re-interred at Haven of Rest. A marker was installed at the Laman Library in North Little Rock in 1999 commemorating those who were buried at Odd Fellows.

"I have family over in that area," Brewer says, pointing to the Odd Fellows section. 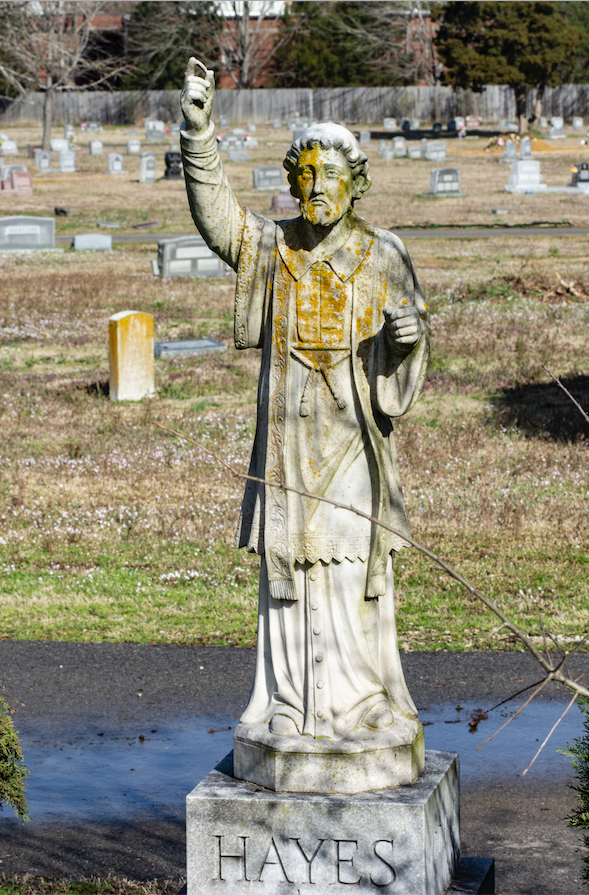 "Your future is purchased in the present. Only the educated are free." -- Quote from Daisy Gatson Bates on her tombstone at Haven of Rest Cemetery.

Bates, a civil rights leader, was a mentor to the Little Rock Nine, the black students who integrated Central High School in 1957. Bates was thrust into the national spotlight three years after a 1954 U.S. Supreme Court ruling that separate public schools "are inherently unequal." In September 1957, the nine black students tried to enter all-white Central High.

Gov. Orval Faubus sent the Arkansas National Guard "to maintain ... the peace" at the school, where angry mobs had gathered outside. That effectively prevented the nine black students from getting in. Later, Faubus removed the guardsmen on the order of a federal judge. President Dwight D. Eisenhower federalized the National Guard and sent 101st Airborne Division troops to the school. The black students attended school the rest of the year under federal protection. During the year, the students gathered at Bates' tiny house, where she advised them on how to handle the taunting and urged them to feel proud of their accomplishments.

She and her husband, L.C. Bates, published the Arkansas State Press, a newspaper dealing primarily with civil rights and other issues in the black community.

In 2001, the state Legislature recognized the third Monday in February as Daisy Gatson Bates Day. There are streets in various towns in Arkansas -- including Little Rock -- that bear her name. 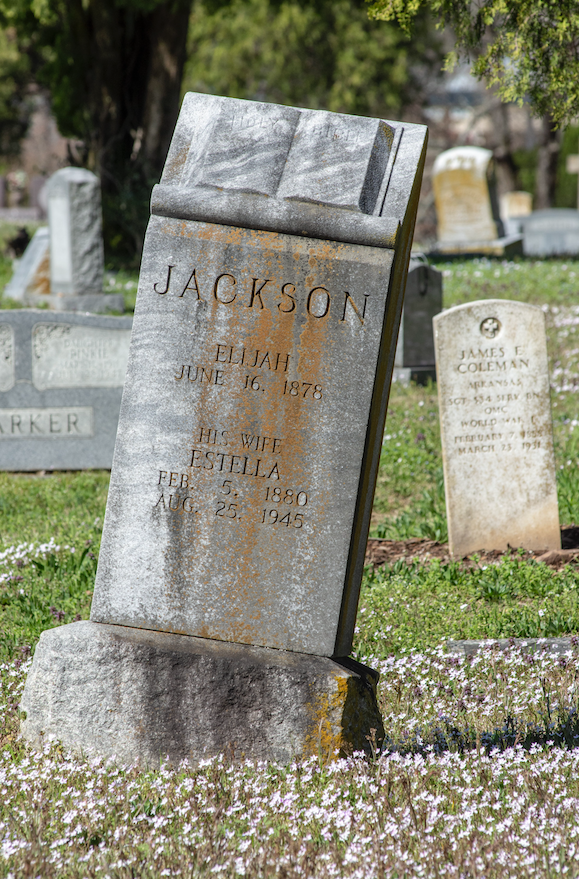 Many tombstones at Haven of Rest Cemetery are leaning — probably because of flooding problems. (Arkansas Democrat-Gazette/CARY JENKINS)

A Haven of Rest fundraiser was held March 22 at Second Baptist Church. The annual event helps raise money for the cemetery's upkeep.

Projects are planned, said Brown, such as redoing garden signs as well as the entry signs. The group hopes to one day install directional signs with sound and a gazebo for meditation and graveside services.

"It's the continuation of preservation," Brown says. "Making sure [Haven of Rest] continues to be maintained."