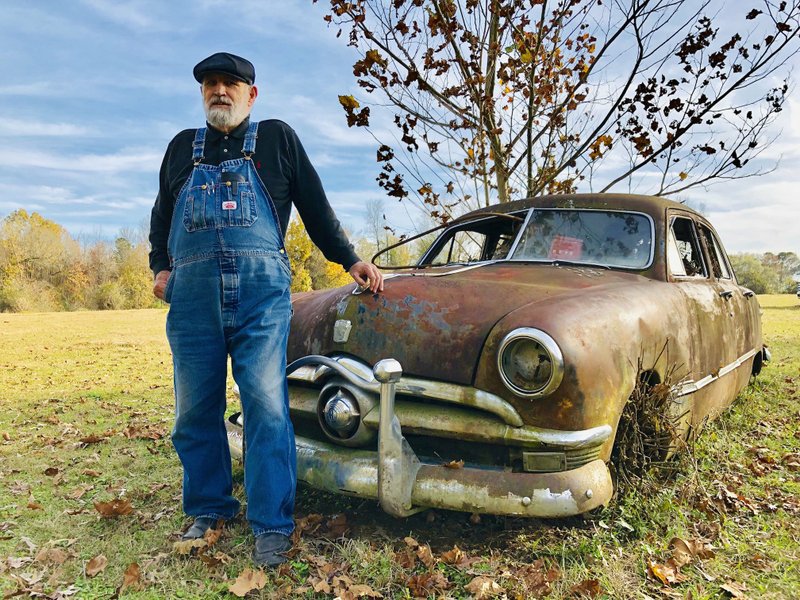 Work by Gurdon artist buZ blurr will be featured in the solo exhibit “Wait of World: buZ blurr Age Progression,” opening during 2nd Friday Art Night at The Bookstore at Library Square in Little Rock. Special to the Democrat-Gazette/Matthew Thompson

In the summer of 1992, Matthew Thompson was reading the latest issue of Cometbus fanzine at Long Arm Records on Rebsamen Road when a story about hobo graffiti on trains caught his eye.

"It was enthralling," says Thompson, who now lives in Phoenix. "It was completely underground and mysterious."

Included in the article were pictures of chalk-drawn art on the sides of train cars of a figure called Colossus of Roads by buZ blurr, the pseudonym of Gurdon artist Russell Butler.

The record shop was near a railroad track, so Thompson and some friends walked down to look at the trains and -- you can't make this stuff up -- saw firsthand the art they had just read about, including a Colossus of Roads line-drawing profile of a man in a cowboy hat with a pipe.

"We learned about it and then saw it at the same time," says Thompson, publisher of the long-running Fluke fanzine. He has been a buZ blurr fan ever since. "He's definitely an icon in the folk-art realm." 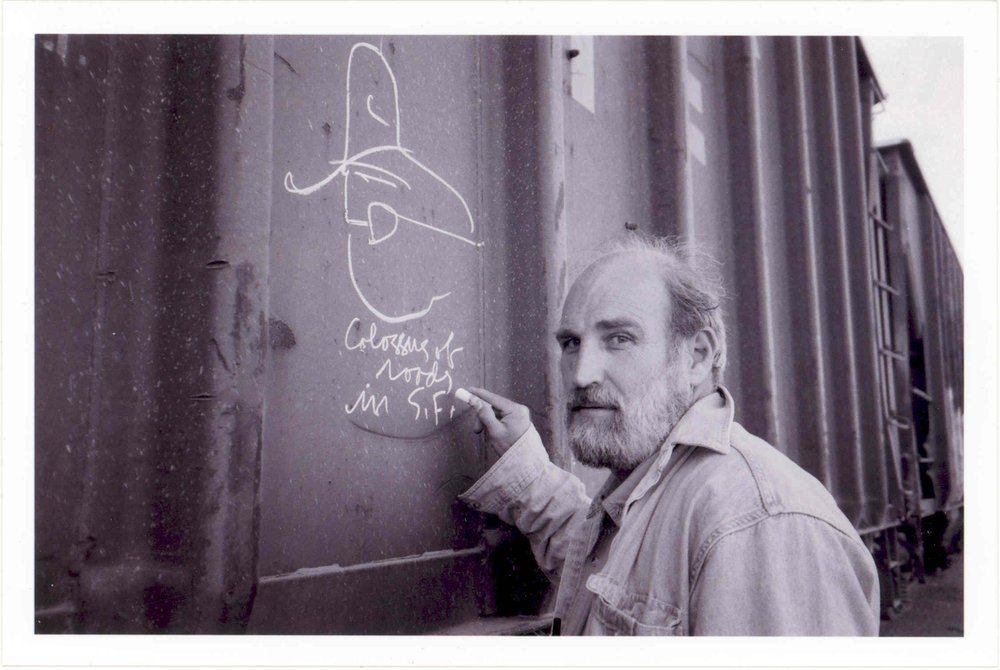 Artist buZ blurr, aka the Colossus of Roads. (Special to the Democrat-Gazette/BILL DANIEL)

"He's examining his own aging process in the show," says Donavan Suitt, gallery coordinator at The Bookstore at Library Square, 120 River Market Ave., Little Rock. "We will have a combination of all of his stuff."

The opening is part of the monthly Little Rock 2nd Friday Art Night, which includes a downtown gallery walk with light refreshments. The exhibit will be up until May 2.

Butler was born Aug. 23, 1943, in Lafe in Greene County and was never a hobo. He studied art at Henderson State Teacher's College (now Henderson State University), but left to work for the Missouri Pacific Railroad in Gurdon and to marry Emmy, his school sweetheart. (They have three children and 12 grandchildren.)

Work and family life kept him away from art for a while, but all that empty space on the sides of boxcars was a tempting, mobile canvas and by 1971 he was scrawling figures like Colossus of Roads and Gypsy Sphinx on them, often accompanied by enigmatic text. The U.S. Postal Service also became an artistic outlet for Butler.

"I did kind of give up on being an artist," he says. "But I started making my drawings on rail cars and subsequently found out about the mail art network."

The experimental, Fluxus-inspired mail art was the subject of two stories -- "New Art School: Correspondence" and "Correspondence Art" -- by Thomas Albright in consecutive issues of Rolling Stone magazine in April 1972.

Inspired, Butler mailed the tear-away postcards that were included with Exile on Main Street, the Rolling Stones' classic double album, to people listed in the magazine stories. As he got feedback, he kept sending out small pieces of artwork through the mail. It was another way, like using the sides of railroad cars, to put his work out into the world.

"Those have been my two main mediums," he says.

Butler, 75, who retired from the railroad in 2003, is also a photographer and uses a Polaroid camera to make stencil portraits. The "Age Progression" aspect of the new exhibit is represented by self-portraits he's taken on his birthdays.

"I've been documenting my birthdays since age 41, so I will have a lot of framed works of my self-portraits interspersed with stenciling portraits from gatherings I've gone to, like hobo gatherings and mail art conferences," he says. "I'll also have a few paintings that are colorful, and some color collages as evidence that I have works other than my historic documentation, black-and-white stencils."

Butler’s work was in the 2001 group exhibit “Widely Unknown” at Deitch Projects in New York and was included in the shows “Art in the Streets" and "Beyond the Streets,” Thompson says.

Film director Bill Daniel, who wrote the Cometbus piece Thompson read at Long Arm, called Butler "The most poetic of the boxcar graffitier" and featured him in the 2005 documentary Who Is Bozo Texino?

Butler is also longtime buddies with musician Tav Falco, who wrote the Encyclopedia of Arkansas entry on Butler (encyclopediaofarkansas.net).

"He was two years behind me in high school when I moved to Gurdon," Butler says. "He was a straight A student and a favorite of the teachers, but I corrupted him by hipping him to the Beat Generation literature."