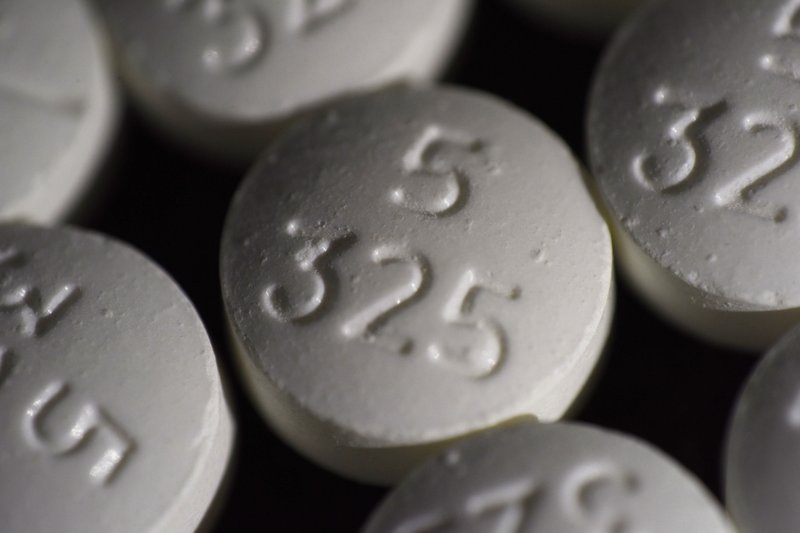 This Tuesday, Aug. 15, 2017 photo shows an arrangement of pills of the opioid oxycodone-acetaminophen in New York. (AP Photo/Patrick Sison)

Widespread opioid addiction has complicated treatment for patients who have chronic pain, Arkansas doctors said at a forum Friday.

They said a better understanding of addiction and how pain works is changing their approach.

"We're trying to get away from the habit of prescribing opioids for chronic pain," especially because they can become less effective or even worsen pain over time, said Dr. Masil George, a UAMS geriatrician and pain-management specialist. "[But] some of my patients have been on these medications for 10-plus years."

Chronic pain is recurring or constant pain that impacts daily activities and functioning.

Managing it has presented a learning curve for clinicians, panelists said, because opiates are very effective at treating pain and are appropriate in some cases.

But addictions and overdose deaths have alarmed the medical community, who now know it takes just a few days to develop a physical dependence on opioids including oxycodone, hydrocodone, fentanyl and tramadol.

Doctors also need special training to prescribe medications, such as buprenorphine, which help patients stop using opioids, and there aren't very many who have those credentials in Arkansas, UAMS Center for Addiction Services director and psychiatrist Dr. Michael Mancino said. Meanwhile, withdrawal can be unpleasant -- he compared it to the "worst case of the flu you've ever had in your life."

"One of the things that doctors say is, 'I don't want [people who are addicted to opioids] in my practice.' But guess what? They're in your practice," he said. "We as physicians need to be leaders, rather than followers, in terms of trying to overcome this."

Arkansas had the nation's second-highest rate of opioid prescriptions, and 188 people died in the state from related overdoses in 2017, according to the National Institute on Drug Abuse. About 47,000 people died in the U.S. from the same cause that year.

Some characteristics of Arkansas and its population, such as its high number of people living in poverty and in rural areas, are also linked to a high chronic pain prevalence, panelists said.

In particular, people living in rural areas can have more limited access to alternative pain treatments, such as acupuncture. Such a situation may lead them to rely on medications.

During the first half of Friday's event, doctors joined Lane in discussing the opioid problem, which they said health care professionals shared responsibility for.

"When people come to us in pain, we want to alleviate their pain," Mancino said.

As more Arkansans struggled with addiction, the state worked to increase the availability of overdose reversal drug naloxone and to develop its prescription medicine take-back program, Lane said.

He wants to see naloxone become a household name, like CPR, and said that it should be in every house where a person has an opioid prescription.

UAMS also has worked to develop treatment programs, including clinics which have next-day availability and telemedicine programs that can help physicians who have questions about medication-assisted treatment.

But a "knee-jerk" ban on opioids some doctors enforce in their practice isn't the answer, Mancino said.

During the second half of the program, actors portrayed people with chronic pain issues to demonstrate treatment tactics.

In one scenario, a man dealing with an old back injury was asked to keep a "pain journal." In another, an 80-year-old woman's pain medication was reduced when her doctor suspected a dependence.

Between vignettes, doctors spelled out the process of diagnosing and treating pain, which can be intensive and includes X-ray scans, physical and verbal examinations, and experimentation.

Leah Tobey, a UAMS physical therapist, said that addressing mental and emotional concerns were just as important as physical ones when treating pain.

"I think sometimes we anticipate pain, and that might increase our pain response," she said.

The UAMS Geriatric Education Collaborative's work, including Friday's program, is funded through a $3.2 million federal grant through the federal Health Resources and Services Administration.

Two University of Arkansas at Little Rock social work students who attended, Nikki Skinner and Hannah Lanier, said they were startled by what they had heard about the prevalence of opiate addiction in the state.

"I didn't realize [addictions could develop in] five to seven days. I thought it was more like 30-60," Skinner said.

Both are interning at the Department of Children and Family Services and said they expect to encounter many families who have been touched by addiction.

Maria Hill, a Mayflower woman who attended the event, said she has been dealing with chronic pain since being diagnosed with breast cancer in 1996.

She described frustration with recent federal- and state-level changes to prescription guidelines, which were meant to combat addiction but that she says left her pain uncontrolled.

"My quality of life has gone down tremendously," she said. "I guess I came here to hear if there's any hope."

Hill, who is retired, linked untreated pain to suicides, which have been rising in the U.S. for more than a decade. She disagreed with what she called a "cookie-cutter" approach to pain management.

She plans to attend a "Don't Punish Pain" rally next month. The events are demonstrations organized by people with chronic pain issues and oppose what they call an "over-correction" on pain treatment, according to materials on a related website.

"I fought so hard to save my life [during my cancer treatment]," she said. "Now I just feel like I'm just trying to live."