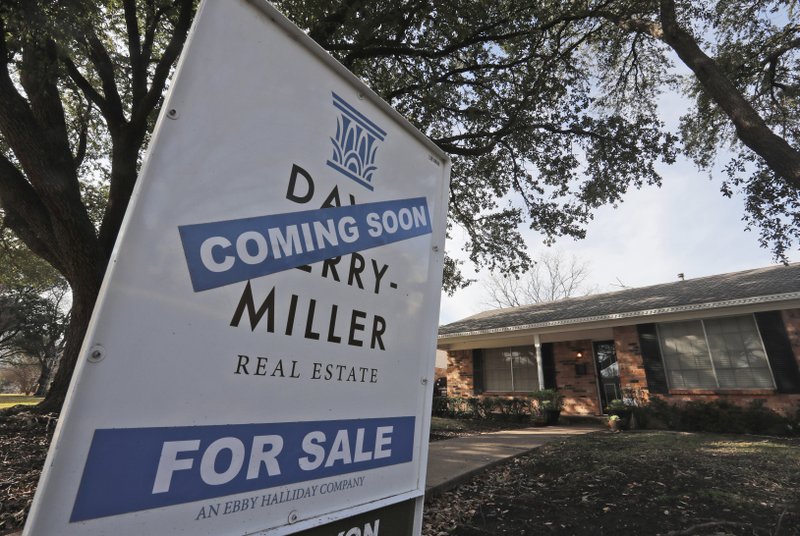 FILE- In this Feb. 20, 2019, file photo a coming soon for sale sign sits in front of a home in the Dallas suburb of Richardson, Texas. On Monday, April 22, the National Association of Realtors reports on sales of existing homes in March. (AP Photo/LM Otero, File)

WASHINGTON -- Sales of previously owned U.S. homes fell in March after a huge gain the previous month, held back partly by a sharp slowdown among the most expensive properties.

The National Association of Realtors said Monday that home sales fell 4.9 percent to a seasonally adjusted annual rate of 5.21 million, down from 5.48 million in February. The drop followed an 11.2 percent gain the previous month, the largest in more than three years.

Home sales are struggling to rebound after slumping in the second half of last year, when a jump in mortgage rates to nearly 5 percent discouraged many would-be buyers. Spring buying is so far running behind last year's healthy gains: Sales were 5.4 percent below where they were a year earlier.

Most analysts expect sales to rebound in the coming months. Borrowing costs have since fallen back to an average of 4.2 percent on a 30-year fixed mortgage. And solid hiring is pushing employers to pay higher wages, making it easier for more Americans to afford a home purchase.

Applications for mortgages to purchase homes have been running at a healthy pace in recent months, evidence that final sales should pick up in the coming months. Demand remains strong, with homes on the market for an average of 36 days in March, down from 44 in February.

"We look for a combination of strong demand and lower mortgage rates to support modest growth in sales over the balance of the year," said Nancy Vanden Houten, senior U.S. economist at Oxford Economics.

Still, a split in the market has emerged, thanks partly to the Trump administration's tax cut law. Sales increased slightly among mid-priced homes but fell sharply among homes priced at $1 million or more.

Developers have built more expensive homes in recent years while pulling back from cheaper properties, even as middle-income Americans are eager to buy.

Properties valued at $100,000 or less, mostly condos, also saw a sharp drop in sales, though that reflects a lack of available homes at that price. The slowdown among higher-priced homes has occurred because of weaker demand.

Sales fell in all four major U.S. regions, with the biggest decline occurring in the Midwest. That may have partly reflected the impact of Spring flooding in Iowa, Missouri and Nebraska last month.

In Salt Lake City, where listings jumped 53 percent in March from a year earlier, transactions fell 21 percent, the biggest drop in the country, according to a report from brokerage Redfin Corp. Utah's capital was followed by Los Angeles, Las Vegas and Orange County, Calif., all previously hot markets where inventory has been rising.

Blame affordability. Buyers -- especially in urban areas in the western U.S. -- stepped back last year after a jump in mortgage rates made it more expensive to purchase homes that were already costly. Trump's tax plan, which punished pricey areas, added to the slowdown. But there's hope that lower borrowing costs this year may already be helping.

"Buyers are back, but they're picky," said Daryl Fairweather, chief economist of Redfin. "In order to get back to a balanced market, prices have to come down more."

Demand in markets such as Orange County went from "good to horrible" in late 2018, said Rick Palacios, director of research at John Burns Real Estate Consulting LLC, which tracks home construction. In the fourth quarter, sales of new homes in the area were the weakest since the Great Recession, he said.

"Existing home sales cooled in March after an explosive rebound in February," Amherst Pierpont Securities chief economist Stephen Stanley wrote in a note. He added that "March might be the closest approximation we have seen in a while to the true underlying sales pace," after February's bounce back from two months that were affected by higher mortgage rates, weather disruptions, and interruptions that may have been caused by the federal government's partial shutdown.

The broader U.S. economy is looking much better now than it did a couple of months ago, when the government shutdown, slumping retail sales and slower global growth threatened to drag down the U.S. economy.

Earlier this year, economists forecast growth could fall to as low as 0.5 percent at an annual rate in the first three months of the year. Now, analysts expect the government on Friday could report growth as high as 2.8 percent.

Information for this article was contributed by Christopher Rugaber of The Associated Press, and Prashant Gopal and Felice Maranz of Bloomberg News.