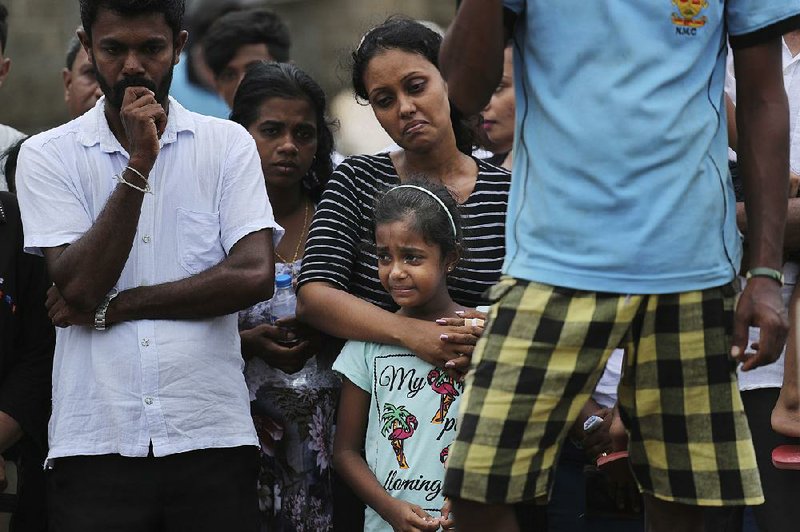 The mother and sister of Dhami Brandy, 13, mourn at her funeral Thursday in Negombo, Sri Lanka. Dhami was among the victims of Easter Sunday’s bombing at St. Sebastian Church.

COLOMBO, Sri Lanka -- Sri Lanka on Thursday lowered the death toll from the Easter suicide bombings by nearly one-third, to 253, as authorities hunted urgently for a least five more suspects and faced the possibility of more attacks in the next few days.

In rolling back the number of dead from 359, a top Health Ministry official, Dr. Anil Jasinghe, said in a statement that the blasts had damaged some bodies beyond recognition, making identification difficult.

Religious leaders, meanwhile, canceled public prayer gatherings after warnings of more such attacks, along with retaliatory sectarian violence. In an unusually specific warning, the U.S. Embassy in Sri Lanka said places of worship could be hit by extremists this weekend.

At least 58 people have been arrested over the wave of blasts at churches and luxury hotels last Sunday, including the father of two of the suicide bombers -- one of Sri Lanka's wealthiest spice traders. Authorities said those involved in the bloodbath were well-educated and well-off financially.

Prime Minister Ranil Wickremesinghe said militants who may have explosives remain on the loose in the country and "may go out for a suicide attack."

Police appealed for information about an additional three women and two men suspected of involvement in the bombings.

The bloodshed stirred fears of more sectarian violence in Sri Lanka, a country of 23 million people, about 70 percent of them Buddhist, with the rest Muslims, Hindus and Christians.

Sri Lanka's Islamic religious affairs minister appealed to Muslims to avoid gathering today for prayers and urged them to pray at home. The prayers on Fridays at noon are the most important in the week for Muslims.

The Rev. Niroshan Perera, a priest overseeing funerals of some of the dozens of people killed in the blast at St. Sebastian's church in Negombo, just outside Colombo, said Catholic churches in the city all closed and canceled Mass on the government's advice.

"Little bit, we are nervous," he said.

But Cardinal Malcolm Ranjith, the archbishop of Colombo, planned to lead a service Sunday, the prime minister said. "I'll be talking with his eminence on the security measures," Wickremesinghe said.

As the manhunt goes on, an association of Islamic theologians urged Muslim women not to "hinder the security forces in their efforts" by wearing veils.

Sri Lankan leaders have acknowledged that intelligence authorities learned of the possibility of an attack weeks before. In the wake of the bombings, the country's president ordered a shake-up of the security apparatus, ousting the defense secretary and demanding the national police chief's resignation.

The spice dealer under arrest, Mohammad Yusuf Ibrahim, lives in a Colombo mansion that was the site of an explosion Sunday that killed three police officers. On Thursday, police continued to search the house. A white BMW outside was covered in black fingerprint dust.

The prime minister described Ibrahim as a leading businessman active in politics and said he was known as "Ibrahim Hajiar," attaching the Sri Lankan term for Muslims who have gone on religious pilgrimages to Mecca. Wickremesinghe expressed doubt about Ibrahim's complicity in the attack.

"People like that would not have wanted their sons to blow themselves up," the prime minister said.

In a house on the other side of a quiet, leafy street full of mansions, Buhari Mohammed Anwar, 77, a retired teacher, said his neighbor was a nice person who helped the poor.

Of the suspected suicide bombers, he said, "Their father, Ibrahim, didn't expect this. Their father advises them every day. But they don't listen."

Information for this article was contributed by Rishabh R. Jain and Jon Gambrell of The Associated Press.