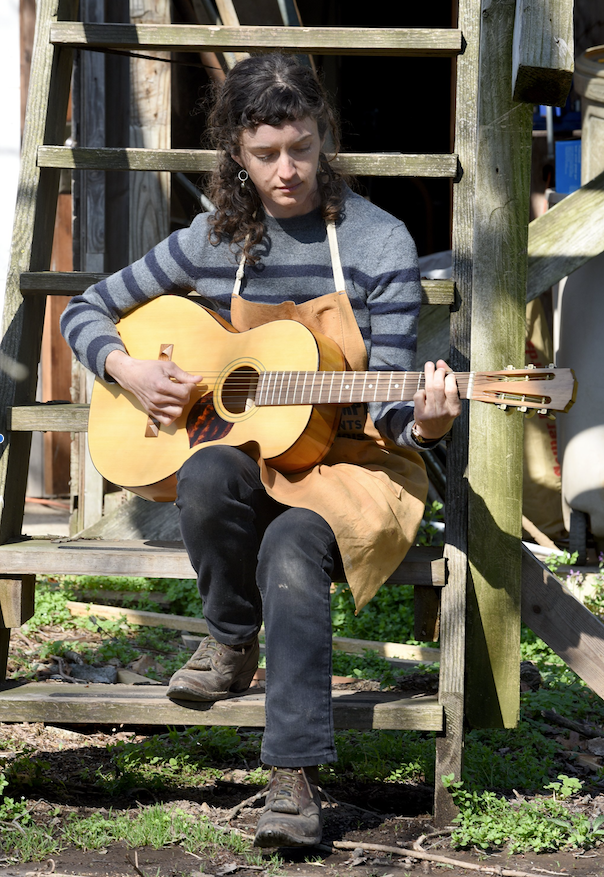 Luthier Aviva Steigmeyer picks a tune on a guitar she made for her Preservation Guitar Company at her shop near Fayetteville. (NWA Democrat-Gazette/DAVID GOTTSCHALK)

WASHINGTON COUNTY -- In 2008, Aviva Steigmeyer was hitchhiking through northern New Hampshire, on her way to join up with a touring puppet show in Vermont. She left her early 1900s, C. Bruno-brand parlor guitar unattended for a few minutes and when she returned it was gone.

"I really loved that guitar," Steigmeyer, 33, says. "It had a rosewood back and sides, and it was in perfect condition. When it got stolen I was really heartbroke, and I just didn't have the funds to buy another guitar that would compare."

Steigmeyer plays rural, old-time music, which predates bluegrass and is based around fiddle, banjo and guitar. It's the kind of music "people were playing on their front porches and at square dances and community get-togethers" in the 1800s and early 1900s, she says.

Running out to Guitar Center to grab something off the shelf simply would not do. To make the music she loves, she needs the sound made by a certain kind of guitar, one from the early part of the last century, or at least one made like that.

Eventually, she was given a guitar that needed repairing and became smitten with luthier work.

"I did a lot of tinkering on old, broken guitars," says Steigmeyer, who grew up in Washington state and went to Fairhaven College of Interdisciplinary Studies in Bellingham, Wash., where she earned a degree in -- hold on -- community building through sustainable agriculture and the rural arts. ("Everybody there made up their own degrees with notoriously long-winded titles," she says with a chuckle. "Mine was no different.")

In 2012, looking to expand on her repair skills, she took a two-month internship with Todd Cambio of Fraulini Guitars in Madison, Wis., where she made her first two guitars -- small, parlor-style instruments similar to her old C. Bruno.

"I was doing it to learn more about repairing guitars, but I really fell in love with building them from scratch. It appeals more to my creative side than repairing. I just like making things."

She also learned that she could like the sound of a new instrument, although she was skeptical when she started picking tunes on the first guitar she built.

"I remember playing it and being like, I just don't know if I like this or not," she says. "But those first few weeks, playing it all the time, I really fell in love with it."

Steigmeyer was living in Keezeletown, Va., and returned there to start Preservation Guitar Co., specializing in custom-made, small-bodied, old-time guitars. 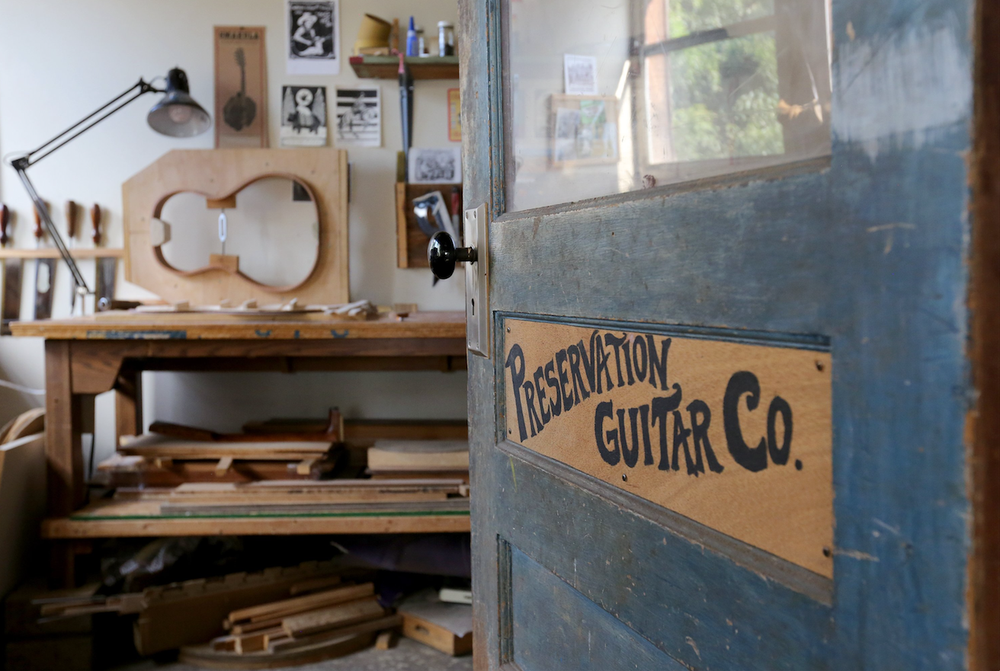 She now operates the company from just outside of Fayetteville. Her small shop sits among a cluster of houses down a bumpy dirt road on property that has been in the family of her boyfriend, Roy Pilgrim, for years.

Steigmeyer's workspace is in an 8-by-12-foot room on the first floor. There are stacks of wood and her tools hang alongside the handmade relief prints she sells. In another room is her bandsaw and a row of birdhouses made by Pilgrim. The second floor is the site of monthly square dances.

Steigmeyer and Pilgrim, a fiddle-playing carpenter and woodworker, met at an old-time festival in Virginia and moved to Arkansas in 2014. They have a home near West Fork and are working on a shop for both of them there.

"There's a real steady stream of guitars coming in and out of the house, which is pretty fun," Pilgrim says. "I get to try out different guitars all the time."

The two are part of the Ozark Highballers, playing old-time music with bandmates Clarke Buehling (banjo) and Seth Shumate (harmonica). Fiddler Pete Howard also sits in from time to time.

She and Pilgrim have carved out their own space in this modern world, working in their garden, hosting square dances and sorghum pressing parties and making old-time music.

Reflecting on her affinity for things from the past, Steigmeyer says: "Not everything about those old times was great. Some terrible things happened, but especially in this modern age of screens and cellphones, I just really like working with my hands and I like playing acoustic music on my porch. I like traveling by bike or horse. I like it when the electricity goes out and I can light my oil lantern. Those things feel really tangible, and I definitely have tried to build my life around that." 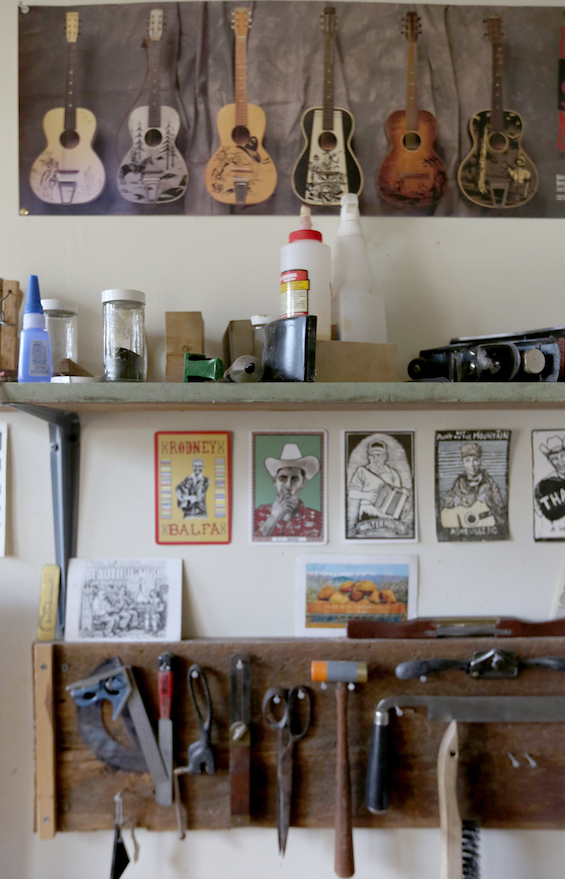 There are more than 40 Preservation Guitar Co. guitars in the world and two of them -- a Lonesome Pine Special (named for a Carter Family song) and a Florence -- belong to Meghan Merker, a sheep rancher and graphic artist in Horse Prairie, Mont.

Merker and Steigmeyer knew each other from the old-time circuit.

"I've played a lot of luthiers' guitars and none of them have that really, true sound that Aviva's have," Merker says. "I'm not after a fancy, slick, modern sound. [I want] a guitar that sounds like an old instrument. And for being small guitars, they have a big sound. They both have a lot of presence and character."

Steigmeyer usually works with domestic hardwoods such as oak, maple or walnut for the back and sides of her guitars and spruce for the tops.

"There are little differences in whatever wood you use, but I think American hardwoods are great for guitars," she says.

Steigmeyer sands the wood thin and also uses a powdered hide glue that becomes thin when mixed up and heated. Most modern guitars are made of thicker wood and heavier glue, she says.

"I think part of that is so companies can offer a warranty, like your guitar is indestructible, but it also doesn't resonate as well. It's a little more dead."

She applies a French polish that is also thinner than what is found on many store-bought guitars.

"It's really traditional and really nontoxic, which I like in my small shop," she says. "It's also thin, which means it's a bit more delicate but it really lets the guitar sound woody and like itself and not dampened down by a thick finish." 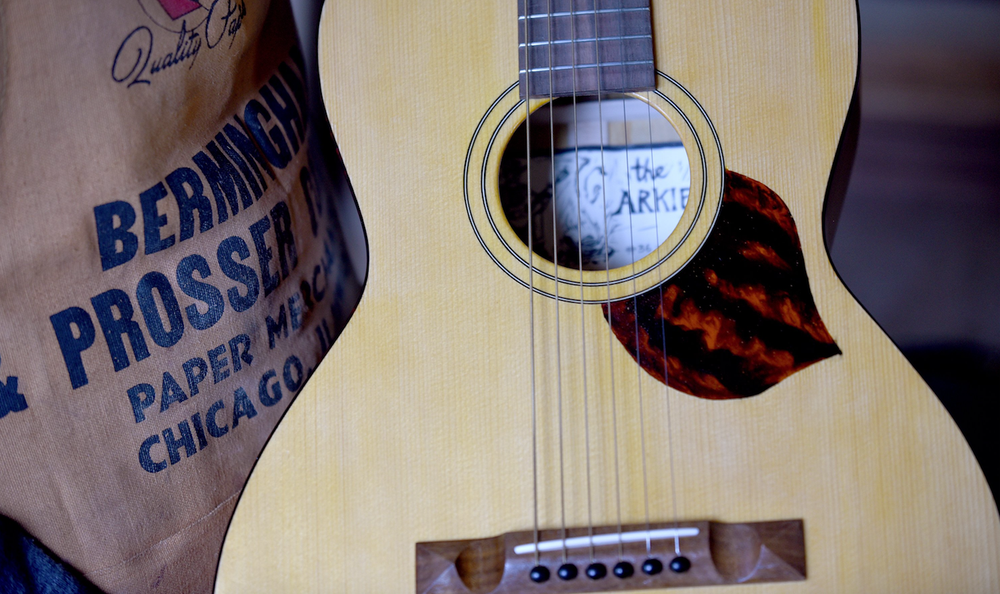 One of the models Aviva Steigmeyer makes is called The Arkie. (NWA Democrat-Gazette/DAVID GOTTSCHALK)

She currently makes five models: The Arkie, a small parlor guitar; Aviva's Special, a big parlor guitar; The Southern Belle, modeled after an old Martin guitar; the gorgeous, curvy Florence, named for its Florentine shape and for Steigmeyer's aunt; and the small Terz. Prices start about $1,800 and usually top out around $2,000, she says.

"I feel Aviva's work could command a higher price," Merker says. "But I'm really glad that it's a fairly accessible price for many people."

Each guitar comes with a hard case and a hand-printed, lino-cut label.

Generally, Steigmeyer says, customers find her through her website, preservationguitar.com, or word-of-mouth.

"I'll walk them through the different options they have, take a deposit, build their guitar and ship it off to them," she says. Completion usually takes a couple of weeks, and she likes to hang onto the instrument and play it a bit herself before sending it to its new home.

"I love to break it in for a few days and make sure there's not any buzzes or anything that needs to be adjusted," she says.

In Montana, Merker plays her guitars just about every day.

"I've been playing for a long time," she says. "Every time I open the case and take one of those guitars out, I feel this intense gratitude that I have these guitars that anybody of any level would be proud and grateful to play." 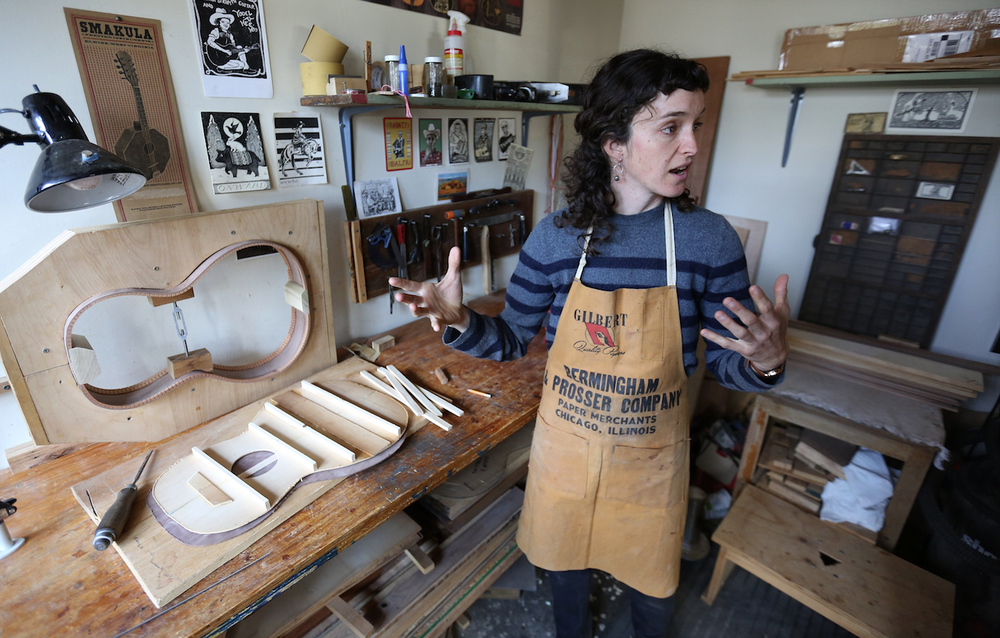 Kelly Marie Martin of Los Angeles has one of Steigmeyer's Arkie models (No. 21, to be exact). She got it after her 1951 O18 Martin guitar was stolen (apparently guitars are thief magnets) and a friend started a crowdfunding campaign to raise money to replace it in 2015.

"It's awesome," says Martin, a grants manager for a nonprofit called Step Up that works with the homeless. She's also an artist and an old-time musician.

"I met Aviva at festivals out here," she says. "I tried one of her guitars and I loved how it sounded. I always coveted old guitars. I think that's what I appreciate about this guitar. She is using the old ways of making things, but you're getting a brand new instrument that is essentially opening up as you play it."

Collaborating with Steigmeyer was a relief, Martin says, and it was also nice to work with a woman.

"Sometimes talking with people who are experts at what they do can be intimidating. She was very open every step of the way. There aren't that many women luthiers in the world and I thought I could really get behind this. As a feminist, this was really awesome."

Martin, who is originally from Alaska, told Steigmeyer that she didn't know what kind of wood she wanted for her guitar but that she had a strong connection to birch.

So Steigmeyer made one with birch sides and back with a spruce top. She also took a cue from Martin's "Fireweed" nickname and etched an image of the wildflower in the guitar's brass tailpiece.

"When I first got it and pulled it out of the case, I just about hit the floor," Martin says. "It has this French polish and this vanilla smell. It's very beautiful. Every detail is perfection." 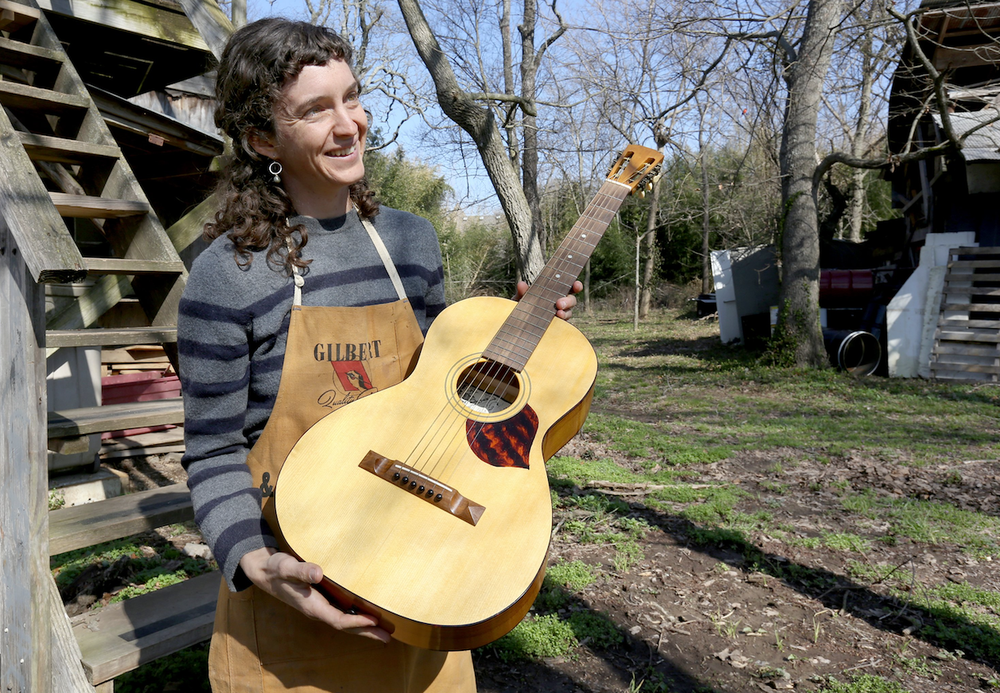 Aviva Steigmeyer learned guitar repair after her guitar was stolen and was soon building her own. (NWA Democrat-Gazette/DAVID GOTTSCHALK)

Steigmeyer, Pilgrim and the other Ozark Highballers have a new album out on Jalopy Records called Goin' Down to 'Leven Point. It features 22 tracks of obscure, Arkansas old-time songs with titles like "Skeeter's Natchez Under the Hill," "Waltz of the Violets" and "Going Down to 'Leven Point to Get a Load of Corn."

Earlier this month, they played a festival in Brooklyn, N.Y., where Jalopy is situated. This summer, Steigmeyer will teach a two-week guitar-building workshop in Elkins, W.Va.

"It'll be my first time teaching, and I'm excited," she says. "I learned how to do this from somebody and it will be cool to pass that along to others."

There are plans to expand, or at least get into a more convenient workspace. She and Pilgrim are working steadily on their new woodworking shop at their home, which will eliminate the 25-minute commute to her current location.

"That's taking a lot of our time right now," she says of the project. "I garden a lot and I like to cook. It just sounds really nice to have my shop right there so I can do those things in between letting glue dry and all that stuff."