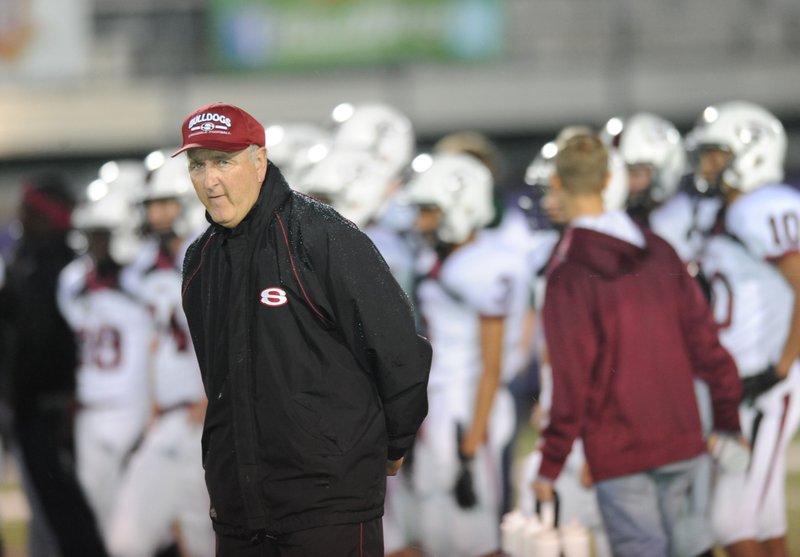 Dennis Debusk will be inducted into the Springdale Public Schools Hall of Fame on Saturday.

SPRINGDALE -- As a teacher and coach for more than 20 years in Springdale, it was hard to get anything past Dennis DeBusk, though many probably tried.

The election committee for the Springdale Public Schools Hall of Fame found a way to pull a fast one on the now-retired coach and administrator, and they did it right under his nose.

DeBusk, who also serves on this committee, was blindsided by the announcement he would be a member of the 2019 Hall of Fame Class. The new inductees will be honored Saturday during a ceremony at Central Junior High.

"I was a little shocked to be honest," DeBusk said. "I'm on the committee that helps pick this, and I didn't know anything about it until it was totally a done deal. I don't know when Wayne (Stehlik) and them did it, but it's as great of an honor as I've had."

It will be a family induction for DeBusk. His sister, Johnelle Hunt, will be inducted Saturday as well. That also caught DeBusk by surprise, he said.

He was given an envelope by Stehlik, the Springdale Public Schools Athletic Director, and was instructed to give it to Hunt.

"We thought it was nice that they wanted her to have a copy of the certificate they were giving me," DeBusk said. "She opened the envelope and looked at it and did not realize they were also putting her in the Hall of Fame, too. This is quite an honor for our family."

The 10-member 2019 class features former athletes from several decades. The event will begin with a reception at 5:30 p.m. in the Central cafeteria. Dinner will begin at 6:30 with the induction ceremony scheduled for 7 p.m.

Brett Hobbs, a standout player for the Bulldogs football team, is also one of this year's inductees. Hobbs is now the defensive coordinator for the Springdale football team.

"This is a great honor," Hobbs said. "The Springdale Bulldogs were my first favorite team growing up. Growing up here and the tradition and knowing the players and watching and idolizing them was special. I played for Coach (Jarrell) Williams, and now to be able to come back and coach here, it's very special and means a lot to me and my family."

Hobbs graduated from Springdale High in 2000. He played at Central under legendary coach Fred Hartfield before moving up to play for another legend in Williams.

For DeBusk, the Hall of Fame induction caps a 23-year career of coaching in the Springdale schools under Williams, Gus Malzahn, Kevin Johnson and others.

"That first year at Shiloh was probably my most enjoyable year of coaching," DeBusk said. "We had 17 scrawny kids who just wanted to play football. And our parents, all they wanted was for their kids to be treated right and play football.

"I will never forget the first game we played. We got beat. We had chances to win, but we made some mistakes. But when the game ended, I looked around, and the fans were giving us a standing ovation. To me that's what it ought to be about."