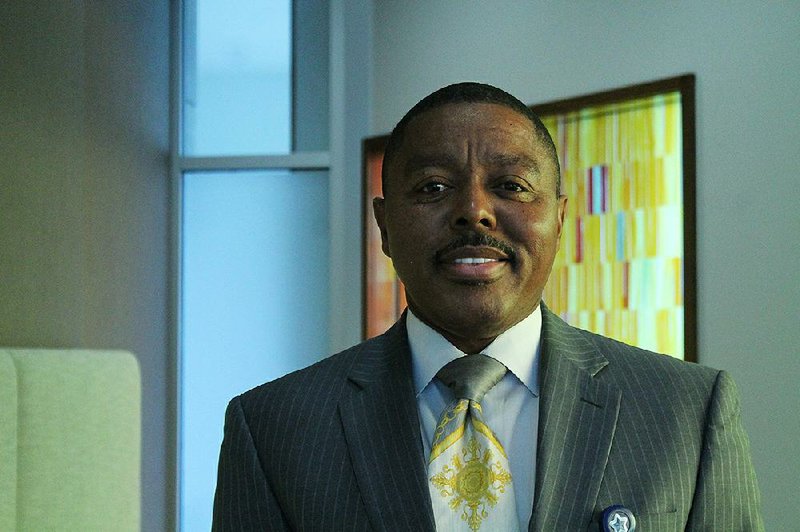 The Rev. Larry Charles, director of pastoral care at CARTI Cancer Center, stands in the facility’s chapel. Charles first began ministering to patients in the 1990s at Arkansas Heart Hospital as a surgical technician.

When Angela Williams of Maumelle was diagnosed with stage 2 breast cancer in February, learning that it had been caught early didn't assuage the fear she felt.

"To hear the word 'cancer,' it's a very scary thing," Williams said.

During her first visit to CARTI Cancer Center's Little Rock location, Williams, an escrow processor, and her husband, Anthony, met the Rev. Larry Charles, the center's director of pastoral care.

"Over the months we've been going to CARTI he's been such a blessing," Angela Williams said. "Talking to him is one of the highlights of going into CARTI for me."

Williams, 51, is one of many patients Charles stops to chat with during his rounds at the center, where he spends each day "doing a lot of listening."

That listening -- and the spiritual and emotional support it provides -- aren't just a role but a calling for Charles, one he first answered more than 20 years ago.

There are references in Scripture about prayer for the sick, but chaplaincy in health care facilities is a much more recent development. According to the Healthcare Chaplains Ministry Association, official coursework for the role recognized as chaplaincy in a health care setting was first developed in 1925 in Massachusetts, and 54%-64% of hospitals from 1980 to 2003 had chaplains.

At Arkansas Heart Hospital, there were none on staff in the latter half of the 1990s, when letters first reached its higher-ups expressing appreciation for their chaplain -- the man who prayed with them before their surgeries and visited them post-operation to check on their well-being.

Charles had been answering the call to minister to patients, unasked, while he was a gastrointestinal surgical tech at the hospital. In 2000, he felt led to write a proposal for a chaplaincy at the hospital that was well-received, but it wasn't until 2005 -- when the hospital became an independent facility -- that his spiritual-care role became official and he became the hospital's first full-time chaplain.

He would go on in 2010 to establish The Breath of Life Church in Bryant, a nondenominational house of worship, and minister to a flock that began with 18 members and now has 120.

"My experience, if we had to really just whittle it down to one word ... that word is 'relationship' -- the relationships that were forged over time," said Charles, noting that the time he had with patients was brief, averaging a span of three to five days, the length of their stay. "Sometimes people are more comfortable just baring their soul to someone they don't know but feel very comfortable with."

The depths of those relationships was such that Charles would learn of the death of a current or former patient and then be told that the person had requested he officiate their funeral.

"He left some shoes so large to fill until I just had to buy new shoes," Smith said.

"I chalk that not up to me, but to God opening ways for me to be able to be very approachable and very easy to talk to," Charles said. "You don't even realize the influence that God has given you ... and so, dedicating babies, doing weddings, funerals, or teaching classes, it was truly a blessing and something I will always cherish in my life."

Charles remained on staff until he went to CARTI as its first pastoral director in October, more than 40 years after the entity once known as Central Arkansas Radiation Therapy Institute was established. He is the sole staff member providing pastoral care at CARTI, a facility that provides treatment to more than 22,000 patients each year at more than 10 locations statewide, according to the center's website.

Adam Head, chief executive officer of CARTI, said the need for pastoral care staff was driven by patients and their families.

"We were asked the question very often: 'Hey, do you guys have a chaplain, [do] you have somebody that we can meet with, somebody we can talk to?'" Head recalled. "I can tell the reason why they were surprised [is] they were thinking, 'Hey, this is cancer that we're dealing with, it's serious.'

"Even if a patient goes into remission, it can change the trajectory of their entire life."

Charles recognizes the need for spiritual care at the center. Seeing patients in a longer-term setting -- chemotherapy, radiation and other treatments can extend for months -- are among the elements that differentiate Charles' newer role at the cancer-treatment center, and he sees how fighting cancer affects patients, and at times it can be emotionally difficult for him.

"Some days it can be tough, because you see [the patients] go down," Charles said. "They're smiling, but it's taken a toll."

For Williams, the prognosis was relatively positive, and when she received the news July 11 that the chemotherapy had completely killed the tumor, she brought Charles the update.

"I was telling him 'I have a praise report for you," Williams said. "[Charles] said, 'God is going to continue to bless you,' and he quoted a verse ... the one where God will bless you with the many blessings, pressed down so that they overflow."

Williams will continue to receive immunotherapy treatments -- medication administered via IV to help replenish her immune system -- until February. Her family and friends have remained an upbeat and positive support system, but she also attributes some of the continued strength of her faith and outlook to Charles.

"I like to tell everybody I didn't do anything. I just rested in God's strength and God's promises, and it's been the most amazing journey, a really positive journey," Williams said. "And [Charles] has actually been a huge part of helping me to keep my faith.

"I'm very blessed ... not everybody has the kind of support that I get, and not everyone has the kind of blessings that I have when it comes to something like this," Williams added. "But I have been the poster child for the positive aspects of [having] cancer, and [he] has been a part of that." 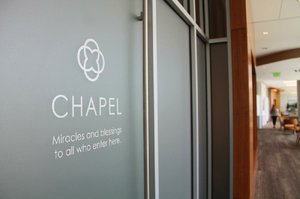 Photo by Francisca Jones
The logo and wording designating the frosted-glass door to CARTI’s chapel were completed Tuesday, less than a year after the Rev. Larry Charles began providing spiritual care to patients at the center. 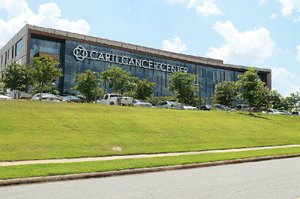 The CARTI Cancer Center in Little Rock is shown in this file photo. (Democrat-Gazette file photo)