Arkansas politicians look ahead to 2022 elections

Senator says he plans to run for lieutenant governor; others weigh bids by Michael R. Wickline | August 3, 2019 at 9:15 a.m. 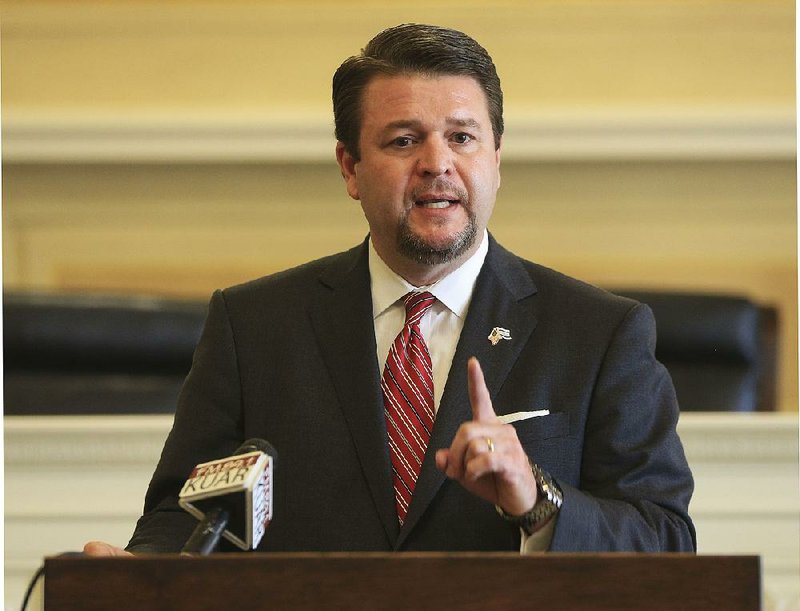 The state is months away from the filing period for next year's elections, but already some politicians are making plans for 2022.

State Sen. Jason Rapert, R-Conway, said on Friday that he plans to run for lieutenant governor three years from now.

Then, Lt. Gov. Tim Griffin, asked whether he is still considering running for governor in 2022, replied in an email to the Arkansas Democrat-Gazette, "To the question of am I running. My quote is 'Absolutely.'"

But Griffin, a Republican from Little Rock, declined further comment when contacted by phone. For the past few years, the former 2nd District congressman and aide to then-President George W. Bush has been widely expected in political circles to run for governor. He started his second four-year term in January and is prohibited by the constitution from seeking a third.

Rapert is a self-described fiscal and social conservative who has served in the Senate since 2011. He chairs the Senate Insurance and Commerce Committee. He is 47 and owner of Rapert Financial and Associates Inc. in Conway.

He said several people have pushed him in the past few weeks about whether he intends to run for lieutenant governor or for re-election to his Senate District 35 seat.

"I really wanted to settle the rumor and say, 'Yes this is my plan at this time,'" the senator said.

"In 2022, I am ready to contribute at another level. I think there is more that I can do. I would love to support the next governor," who hopefully will be a Republican, Rapert said in an interview with the Democrat-Gazette.

As lieutenant governor, he said his priorities would include being "a great advocate" for business in the state; supporting whoever succeeds Gov. Asa Hutchinson; and supporting Republican policies that have been put in place in the past several years to cut taxes and grow jobs. Hutchinson also is term limited.

Rapert said he will make a formal announcement after the 2020 presidential election because he's focused on getting U.S. Sen. Tom Cotton, President Donald Trump and others re-elected.

The primary election in 2022 will be on May 24, and the general election will be Nov. 8 unless state law is changed, said Chris Powell, a spokesman for Secretary of State John Thurston.

Sen. Jonathan Dismang, R-Searcy, said Friday that he is considering running for lieutenant governor in 2022.

"But I still have an election before me," he said, referring to his 2020 bid for re-election.

"It will be a while before I finalized that decision," said Dismang, who has served in the Senate since 2011. He was Senate president pro tempore from November 2014-19 and in the state House of Representatives from 2009-11.

Asked about speculation at the state Capitol that he's considering running for lieutenant governor in 2022, state Treasurer Dennis Milligan, a Republican from Benton, replied in a text message to the newspaper: "I'm focused on being treasurer right now.

"It's too early in the election process for me and I have 3 and 1/2 years left in this term," said Milligan. He has been state treasurer since 2015 and is a former chairman of the state Republican Party.

"At this point politically, I'm going to help my party's candidates in Arkansas win and re-elect President Trump in 2020," he said.

Asked about speculation at the Capitol that she is considering running for lieutenant governor, Sen. Missy Irvin, R-Mountain View, replied Friday night in a text message to the newspaper that, "I am currently focused on serving the wonderful people in my Senate district.

"When the time comes to make any decisions about my future, I will, along with my family, prayerfully consider continuing my service to our state in either another term in the Senate or a constitutional office," said Irvin, who has served in the Senate since 2011.

Under the Arkansas Constitution, the lieutenant governor presides over the state Senate when it's in session, and he can vote to break ties. He serves as governor if the governor dies or is impeached, removed from office or otherwise unable to serve. The lieutenant governor no longer becomes acting governor when the chief executive is outside the state, thanks to voters approving Amendment 96 to the constitution in 2016.

The lieutenant governor is paid $43,584 a year. It's considered a part-time job. Griffin has served in the post since 2015.

Hutchinson, of Rogers, has been governor since 2015. He also is prohibited from running for re-election in 2022 under the state's term limits amendment. The governor's salary is $148,134 a year.

Hendren, whose uncle is Hutchinson, said Friday that he is going to make a decision about whether to run for governor "sometime around the first of the year," and he won't make an announcement until early next year.

Asked if she is still considering running for governor, Rutledge said Friday in a written statement, "I remain focused on my work as the Attorney General to create economic opportunities for job growth in the Natural State and to protect Arkansans from criminals and con artists.

"There are three full football seasons before we elect the next governor of Arkansas," said Rutledge, who served as an aide to then-Republican Gov. Mike Huckabee, who is Sarah Huckabee's father.

Sarah Huckabee could not be reached for comment Friday.

The filing period for the 2020 elections is November.

Information for this article was contributed by Frank Lockwood of the Arkansas Democrat-Gazette.