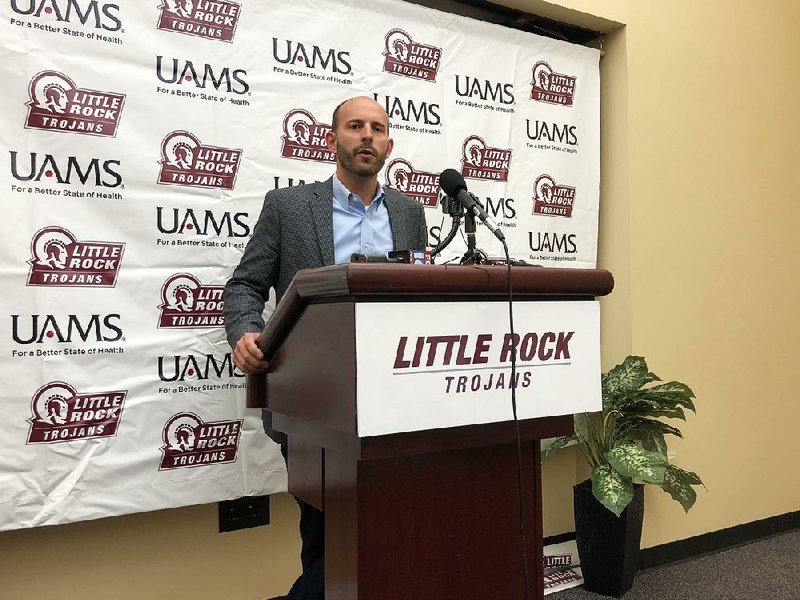 Less than five years into his tenure, University of Arkansas at Little Rock Athletic Director Chasse Conque has decided to move on.

In a news conference inside the Jack Stephens Center in Little Rock on Friday afternoon, Conque formally announced his departure, which will happen later this month. He is headed to Edinburg, Texas, where he'll take over the same position at the University of Texas Rio Grande Valley, a non-football playing member of the Western Athletic Conference with a student enrollment of roughly 30,000, nearly 20,000 more than UALR's.

Conque spent time Friday reflecting on UALR athletics' accomplishments since he took the job in January 2015, while also looking toward his future. He had met with support staff members and all 10 UALR head coaches -- five of whom have been hired by Conque -- earlier in the day to deliver the news.

"This is a certainly bittersweet day," said Conque, who turned 35 on Thursday. "It has been one of the most rewarding, challenging but fun four-and-a-half years of spending time here as the director of athletics.

"We've got a lot to be proud of. We've had some tough times. We've had some really great times. But the people clearly make our place special, and that's what Lisa and I, and our family, will miss the most."

Under Conque's leadership, UALR experienced a considerable rebrand of the athletic department in July 2015; increased fundraising and revenue; multiple facility projects, including a $1 million renovation of what is now the Donaghey Athletic Center; and the inception of a wrestling program that's set to compete in the Pac-12 Conference starting this year.

The Trojans also have racked up 19 team and individual Sun Belt Conference titles and advanced to the NCAA Tournament six times across multiple sports, including men's and women's basketball, women's soccer and track and field.

Conque also was responsible for hiring Chris Beard as the men's basketball coach in 2015 after just a few months on the job. In one year at UALR, Beard -- who took Texas Tech to the national title game this year -- guided the Trojans to a 30-5 record. It was UALR's only winning season in the past six years, and it was good for Sun Belt regular-season and tournament titles. The Trojans then beat Purdue in the first round of the NCAA Tournament.

"We are grateful to Chasse's leadership and success as athletic director and vice chancellor and wish him the best as he joins the University of Texas Rio Grande [Valley]," UALR Chancellor Andrew Rogerson said in a statement released by the school. "Chasse did an excellent job of fundraising and building support for the Trojans and the university, so it is tough to see him go. Our campus and fans will truly miss him and his wife, Lisa, and their three daughters."

Conque, who also served as UALR's director of athletic development for fundraising from 2007-11, admitted he didn't expect to be leaving his post this soon. He said when he took the athletic director position back in 2015 that he felt it was a "10-year job."

But that all changed when Conque received a phone call about the opening at Texas Rio Grande Valley a month ago. Conque took time to consider the role and decided that it was "just too good to pass up." He and his wife recently visited the Rio Grande Valley area for a couple of days and were instantly sold.

"There's some things in place at UT Rio Grande Valley that will give their athletics department a tremendous upside," Conque said. "It's a great opportunity for me professionally, it's a great opportunity for my family. So impressed with the people. There's just some real potential down there that's very exciting as an AD. And I think a lot of the work that's ahead of us at UTRGV is very much the kind of work that we've done [at UALR] over the last four and a half years."

Asked whether financial limitations at UALR played a role in his decision to leave, Conque downplayed it and said those exist anywhere at this level.

"It's always a challenge at the midmajor level. Those same challenges will be there at UTRGV," Conque said. "Certainly having the student population, the growth of that region is gonna help. We've obviously been experiencing some things at [UALR] that have made it hard, but that's where the community has just stepped up in such a big way."

Conque is set to meet with Rogerson today to discuss the plan for transition. An interim athletic director is expected to be named by Rogerson in the next few weeks. Rogerson was off campus and not at Conque's news conference Friday.

For now, the future of UALR's athletic department remains uncertain, and it's unclear at this time who Rogerson might target as Conque's successor.

But Conque believes that person will inherit an athletic department that is on a positive trajectory.

"The foundation here is, I feel, really strong," Conque said. "I think there's a lot of good things in place. I assured our coaches of that. I assured them of my work for the next three weeks and some things that I need to get done and button down and make sure there's a smooth transition, and I'll work with the chancellor on that transition. But they're in good hands, and we've got a great team."