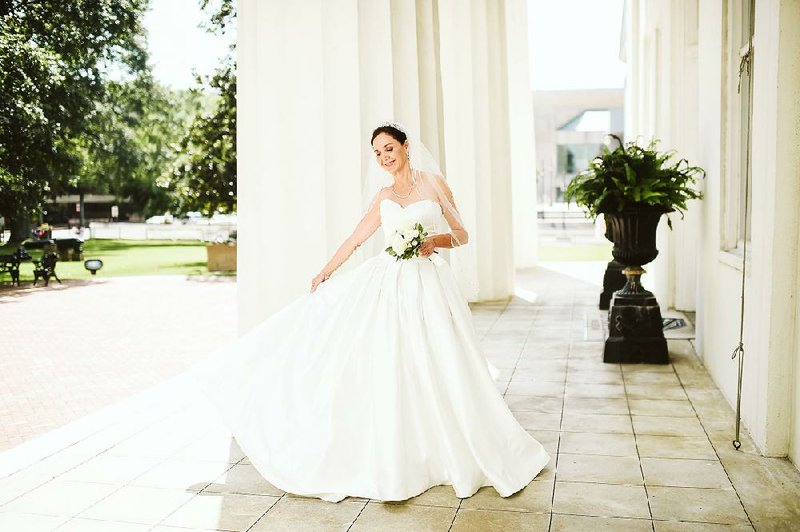 The wrought iron fence and front doors of the Old State House were decorated with magnolia leaves and blossoms. Music was by soloist Carol Isom, harpist Alisa Coffey and an Arkansas Symphony Orchestra quartet.

The bride was escorted by Frank Joseph Tarantino of Jamestown, R.I., brother-in-law of the bride, and Matthew Gray Bradford of Little Rock, her nephew. Both also served as ushers.

She wore a strapless ivory satin ballgown with a sweetheart neckline, a full box-pleated skirt and cathedral-length train. A silver and crystal tiara secured her fingertip-length veil embellished with beads, pearls and rhinestones. She carried a white bouquet of roses and gardenias.

Elizabeth Suzanne Tarantino of Martha's Vineyard, Mass., niece of the bride, served as maid of honor. She wore a periwinkle ballgown embellished with beading. Taylor-Anne Bradford of Little Rock, great-niece of the bride, was a junior bridesmaid. Her pearl pink satin and lace ballgown was embellished with floral embroidery and beading. They carried bouquets of peonies, roses and hydrangeas in shades of white, coral, pink and periwinkle.

The ceremony ended with music provided by a sound engineer at Nickelodeon that combined wedding chimes with the Spongebob Squarepants theme song.

A reception at The Capital Hotel followed the ceremony. Tables were decorated with arrangements of white, coral and pink peonies and roses. The all-white wedding cake was topped with a fondant and icing pineapple.

The bride is founding president of Women In Film Arkansas and a screenwriter and film producer. She graduated from the University of Arkansas, Fayetteville, where she received a bachelor's degree in art and master's degree in education.

The groom is an Emmy-nominated actor known as the voice of Squidward on Nickelodeon's Spongebob Squarepants. He graduated from Arkansas State University at Jonesboro with a bachelor's degree in radio and television.

The couple will live in Burbank, Calif.