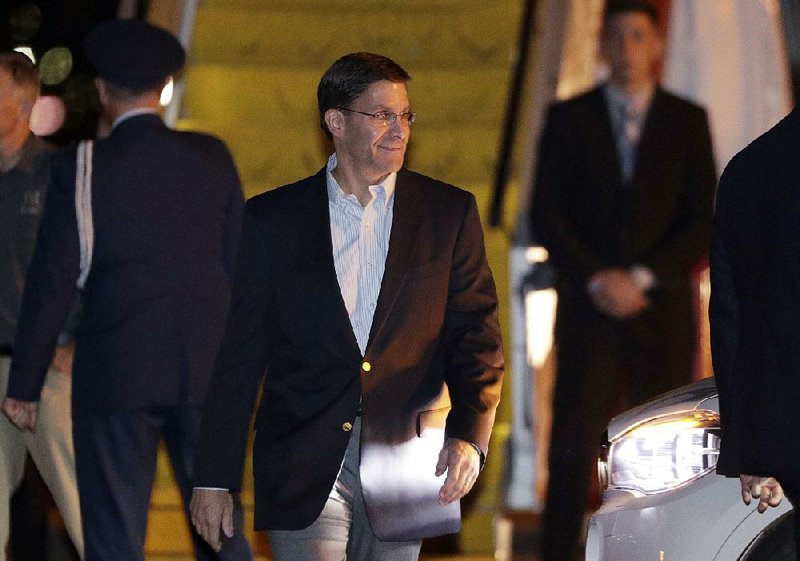 SYDNEY -- U.S. Defense Secretary Mark Esper said he wants to deploy an intermediate-range conventional missile in the Pacific region within months, now that President Donald Trump's administration has formally pulled out of a Cold War-era arms-control treaty with Russia.

Esper, however, added that it will likely take some time to develop the more advanced land-based missile capabilities. The move is likely to anger China, but Esper said Beijing shouldn't be surprised by it.

Esper, speaking to reporters Saturday on his way to Australia, said he would like to see the deployment within "months" but did not specify an exact timeline, the types of weapons the United States would deploy and where exactly they would be positioned.

"These things tend to take longer than you expect," Esper said.

Esper's comments come as the Intermediate-Range Nuclear Forces treaty expired Friday, and the U.S. said it planned to begin testing new missiles that would have been prohibited under the accord. The U.S. has complained for years that Moscow has been violating the treaty, and that a Russian system banned by the agreement is a direct threat to the U.S. and its allies.

Secretary of State Mike Pompeo announced the formal U.S. withdrawal Friday, saying that "the United States will not remain party to a treaty that is deliberately violated by Russia."

Esper, who was confirmed as Pentagon chief on July 23, wouldn't detail possible deployment locations in Asia, saying it would depend on discussions with allies and other factors. He downplayed any reaction from China, saying that "80% plus of their inventory is intermediate-range systems, so that shouldn't surprise them that we would want to have a like capability."

He said that because of the great distances within the Indo-Pacific region, U.S. development of effective intermediate-range precision weapons is important.

Some Pentagon estimates have suggested that a low-flying cruise missile with a potential range of about 620 miles could be flight-tested this month and be ready for deployment in 18 months. A ballistic missile with a range of roughly 1,860 to 2,490 miles could take five years or more to deploy. Neither would be nuclear-armed.

The Intermediate-Range Nuclear Forces treaty was signed in 1987 and banned land-based missiles of ranges between 310 and 3,410 miles. Its demise comes as world powers seek to contain the nuclear threat from Iran and North Korea. And it signals another milestone in the deterioration of relations between the U.S and Russia.

On Saturday, Esper said the deployment of any U.S. missiles to Asia would be "conventional" in nature and within "[Intermediate-Range Nuclear Forces] range."

His pledge to field shorter-range missiles to the region has not stopped the Pentagon from looking toward a future in which longer-range, ground-based missiles might soon be tested and deployed.

But Esper also expressed caution Saturday over how long those types of weapons would take to reach the field.

"I honestly can't recall if it's 18 months or longer, but my sense is it would likely take longer," Esper said. "It's fair to say, though, that we would like to deploy a capability sooner rather than later."

The demise of the Intermediate-Range Nuclear Forces treaty left a major hole in NATO's defense, and the world body said Friday that it would respond in a "measured and responsible way" to a deployment of missiles by Moscow that violated the pact.

With China wielding an array of weapons capable of striking Taiwan, Japan, India and Guam, and the recent North Korean tests of short-range ballistic missiles that have been compared with Russia's nuclear-tipped Iskander ballistic missile, experts say they believe that a new arms race may be on the horizon.

One remaining bulwark against such a move is New START, a treaty between the United States and Russia that dictates the number of strategic weapons that can be deployed. But the agreement is unlikely to be renewed when it expires in less than two years.

Esper on Saturday added his voice to those who believe that extending the New START treaty may not make sense. New START expires in February 2021.

Trump has called New START "just another bad deal" made by President Barack Obama's administration and has said he wants to negotiate a three-way nuclear arms control agreement among the U.S., Russia and China.

When asked about the fate of New START, Esper said "we need to take a serious look at the treaty" and make sure that it is still within the United States' interests.

Esper said the U.S. should look at including other nuclear powers and expand the types of weapons controlled by the treaty. He added that he does not believe this will trigger a new arms race, but that the U.S. needs to deploy missile capabilities that can protect Europe and the Pacific region.

Esper arrived in Sydney for the annual meeting of U.S. and Australian defense and foreign ministers. Pompeo is also attending.

It will be his first overseas trip as a Senate-confirmed secretary. Former acting Defense Secretary Patrick Shanahan, who stepped down before his confirmation, visited Japan and South Korea in June.

Esper said he is returning to the region to affirm the U.S. and his own personal commitments to the Indo-Pacific. The Pentagon's national defense strategy deems China and Russia as America's top strategic competitors.

Information for this article was contributed by Lolita C. Baldor of The Associated Press and by Thomas Gibbons-Neff of The New York Times.