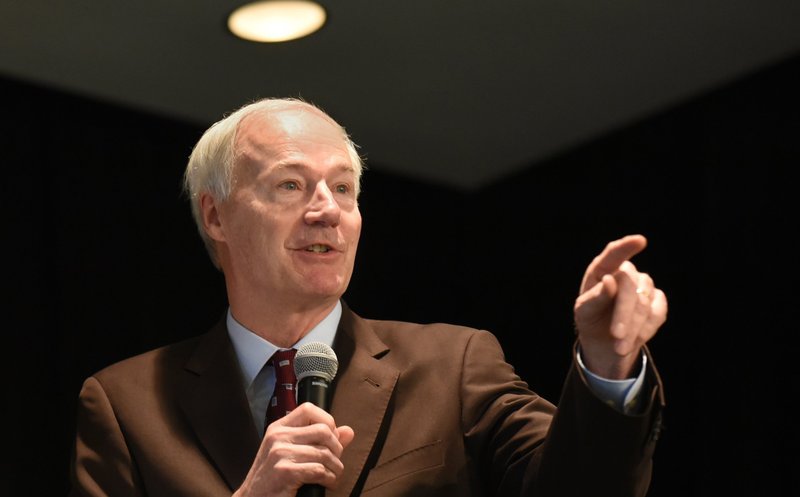 ROGERS -- Gov. Asa Hutchison wants to see hate crimes prosecuted in the state, he said Tuesday while speaking to the Arkansas Sheriffs' Association.

Hutchinson told the group that he is willing to discuss a law to take guns from people deemed at risk of committing violence, but added that he hasn't read any legislation yet that he could support.

His comments came days after mass shootings in El Paso, Texas, and Dayton, Ohio, that left at least 31 people dead. A gunman killed 22 people at a Walmart in El Paso, and another killed nine in Dayton.

Hutchinson said Arkansas is one of only four states without a hate-crime law. The others are Georgia, South Carolina and Wyoming, according to the U.S. Department of Justice.

There should be enhanced penalties under the hate-crime law for people who commit crimes based on religion, race, ethnicity, sexual orientation or gender identity, Hutchinson said.

"People should not be targeted because of who they are," he told reporters after he spoke to the association.

Hutchinson said he would like to get a hate-crime bill before the Legislature as soon as possible, but he said the timetable hasn't been determined.

"I absolutely look forward to working with him on this bill," Elliott said, noting such legislation should have bipartisan support.

Hutchinson told the association there will be more discussions about extreme-risk protection orders -- also called "red flag laws" -- in the wake of the most recent shootings.

Sen. Tom Cotton, R-Ark., speaking to the sheriffs group Monday, called for Congress to make it easier for law enforcement agencies and others to present evidence from family members or others to a judge that a person shouldn't have access to firearms.

Extreme-risk laws empower families, household members or law enforcement officers to temporarily remove a person's access to firearms before the person commits violence, according to the Giffords Law Center to Prevent Gun Violence.

An Arkansas bill that would allow for judicial orders to confiscate guns from people deemed to be a threat failed in committee in March. Sen. Greg Leding, D-Fayetteville, referred his bill for a red-flag law to a study committee until the 2021 legislative session. The bill was rejected in the Senate Committee on City, County and Local Affairs.

The committee vote against Leding's measure, Senate Bill 621, was along party lines, according to records of the vote, with Republicans against it and Democrats for it.

Hutchinson, who previously said he had concern about due process in regard to a red-flag bill, said Tuesday that he hasn't seen any plan yet that he could back.