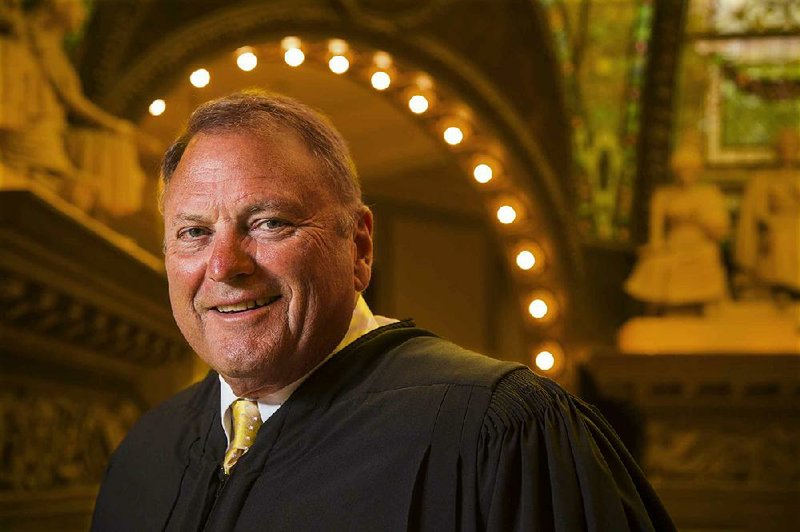 Bentonville District Clerk Jennifer Jones violated the Arkansas Freedom of Information Act by refusing to release a set of court records and claiming that a state Supreme Court order gave her the authority to withhold them, Pulaski County Circuit Judge Chris Piazza ruled Tuesday in an open-records lawsuit.

"The truth is, the public has a right to know, and this is public information," the judge said, telling the parties that the court system only works if the public can see it operate. "The [Freedom of Information Act] is the heart of the issue."

But Piazza ruled against awarding legal fees to the plaintiffs, citing the extenuating circumstances behind Jones' decision to withhold the records: She'd been acting on advice that she received from state judicial authorities, and collecting the records at issue requires a tedious 14-step computer-search process.

Piazza also agreed with Jones, who was represented by a staff lawyer for state Attorney General Leslie Rutledge, and rejected allegations in the suit that Jones' refusal violated federal free-speech guarantees and court precedent.

Jones, who has been the Bentonville clerk -- an unelected state position -- for nine years, claimed a provision of the state high court's Administrative Order 19 allowed her to withhold a full accounting of the records the Bentonville court held on a man who needed a background check to be hired.

Jones, who did not testify Tuesday, maintained that Section Six of Order 19 allowed her to refuse to provide record requests like the one at issue if the request requires her to create a new record, unless the requester meets conditions established by the high court's order.

Those conditions include providing confidentially guarantees and agreeing to restrictions on how those records can be used. Requesters also can be required to buy licenses and pay the expense of putting the records together. The Freedom of Information Act allows agencies to charge only for the cost of the document produced and not the labor or equipment involved.

The request was for any records that the Bentonville court had pertaining to one man, and Miller told the judge that the record set being sought is the electronic version of finding and providing physical files from storage.

He said Jones' refusal to provide the records is keeping job applicants who are legally required to pass background checks from going to work.

"While Ms. Jones is not complying ... they're not getting their jobs," Miller said.

But Jones' lawyer, Jennifer Merritt, senior assistant attorney general, told the judge that Jones had been acting on advice she received from the Administrative Office of the Courts, the judicial branch's management agency, and that Bentonville's case-management program is an amalgamation of two computer systems that presents unique challenges.

Anyone can search for records filed since May 2013 because those documents are accessible through one system, Merritt said.

But all records filed before May 2013 can be accessed through a second older system that only clerks can use. Searching that second system can take up to 10 minutes for each search and requires Jones to assemble a new document out of existing ones.

That's an issue when the clerk is being asked for 840 to 1,200 records at a time, Merritt told the judge. It's an "extremely cumbersome and time-consuming" process that disrupts Jones' office efficiency, she said.

Miller countered that the Bentonville office could have avoided the computer issue by joining the CourtConnect online system offered statewide rather than choosing to purchase its own computer systems that is incompatible with CourtConnect.

So far, 15 district courts and 58 circuit courts, along with the state Court of Appeals and Supreme Court, use CourtConnect.

The records requester in the lawsuit was Courthouse Concepts Inc. of Fayetteville, a background-screening company that provides background checks for employers, landlords and volunteer groups.

The company was not a party to the suit, but its president, Paul Hickman, attended Tuesday's 90-minute hearing and provided evidence to the plaintiff during pretrial proceedings.

The plaintiff was the National Association of Professional Background Screeners, a trade association that represents background-check providers, like Courthouse Concepts. The association, a North Carolina-based nonprofit, has more than 880 members nationwide, and it was represented in court by executive director Melissa Sorenson.

Miller, the trade group's attorney, told the judge that the lawsuit was necessary because out of all of the court clerks in Arkansas, Jones is the only one who has balked at providing records, going "against the practices of court clerks nationwide." She has made Courthouse Concepts' work "not just difficult but impossible," Miller said.

Piazza's summary-judgment ruling ends a yearlong lawsuit, but the judge said he expects an appeal, and a challenge to his decision by the attorney general would not be unprecedented.

Rutledge has a history of disputing court verdicts that broaden the scope of the Freedom of Information Act. In 2016, Rutledge lawyers unsuccessfully argued that access to crash reports from the State Police are controlled by the state Transportation Code and not the Freedom of Information Act. That same year, her staff also claimed personal identifying information on those reports was federally protected and could not be made public.

Arkansas' 230 district courts preside over small-claims civil cases, traffic offenses, misdemeanor crimes and municipal ordinance violations, although some have expanded jurisdiction. They are also the court of first appearance where bail is set for felony criminal suspects upon arrest.