State bid to pare Medicaid roster on back burner 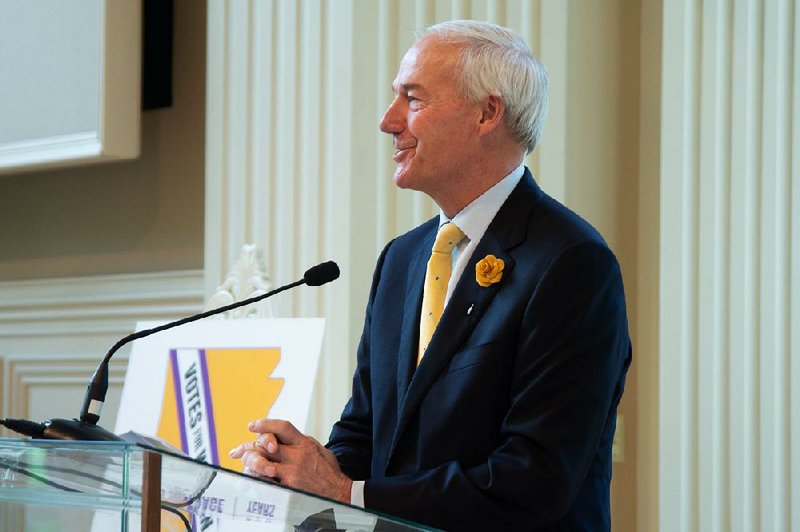 Gov. Asa Hutchinson said Wednesday that he has yet to receive a final decision on Arkansas' request to shrink the expanded part of its Medicaid program and that approval of the request is unlikely "anytime soon."

He spoke less than two weeks after President Donald Trump's administration said it would not approve a request from Utah similar to Arkansas'.

"Even though we have not had any official word on that from the administration, it certainly seems to me that [the White House Office of Management and Budget] and the White House has taken the position that they do not want to see that type of waiver granted," Hutchinson told reporters Wednesday.

"So I'm realistic about it, and I don't expect that to be approved anytime soon, even though we have not received the formal denial."

He said he is focused instead on the appeal by the state and Trump administration of a federal judge's ruling that struck down the state's Medicaid work requirement.

If the U.S. Court of Appeals for the District of Columbia Circuit rejects the appeal, "I would expect an appeal to the U.S. Supreme Court on that issue," Hutchinson said.

Overriding a law passed by the Utah voters in November, lawmakers there earlier this year decided to extend Medicaid eligibility to adults with incomes of up to the poverty level, instead of 138% of the poverty level as called for under the federal Patient Protection and Affordable Care Act.

Arkansas implemented a full Medicaid expansion in 2014, but asked permission in 2017 to reduce enrollment by about 60,000 people by lowering the income cutoff for eligibility to the poverty level and to add the work requirement.

Both states had hoped to receive the Affordable Care Act's enhanced funding for Medicaid expansion while covering fewer people than envisioned under the health care overhaul law.

Under the Affordable Care Act, the federal government is paying 93% of the cost of coverage for the expansion population this year and 90% next year and in future years. Arkansas and 33 other states that have fully expanded Medicaid receive the enhanced funding.

Centers for Medicare and Medicaid Services Administrator Seema Verma in March 2018 approved Arkansas' request for a work requirement, but said she was "not at this time" allowing it to lower the income cutoff.

In a statement late last month, the federal agency said approving such requests "would only invite continued reliance on a broken and unsustainable Obamacare system."

"While we have carefully considered these requests, CMS will continue to only approve demonstrations that comply with the current policy," the agency said.

In Arkansas, most people covered under the expanded part of the Medicaid program, known as Arkansas Works, receive the coverage through private plans subsidized by Medicaid. More than 242,000 people were enrolled in Arkansas Works as of July 1.