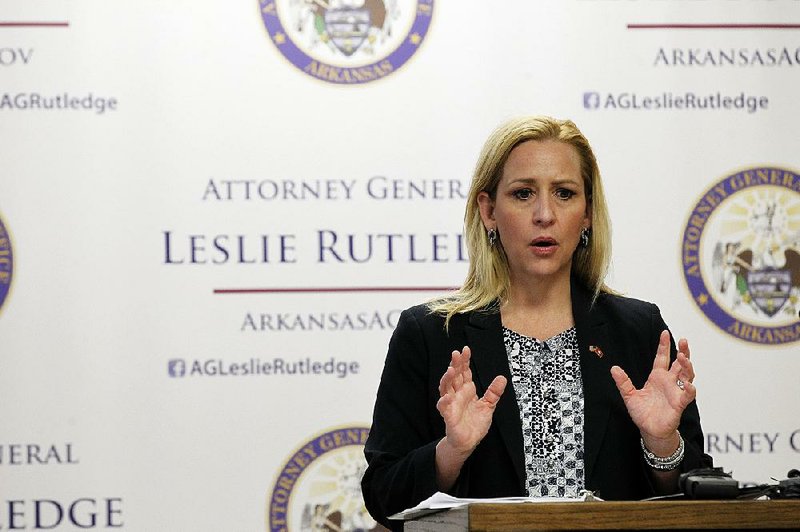 In a 144-page motion filed Thursday evening, attorneys for the state asked the federal appellate court to stay the order of U.S. District Judge Kristine Baker, who granted a preliminary injunction at the request of the Libertarian Party of Arkansas. The injunction blocks the enforcement of Act 164 of 2019, which increases burdens on new political parties seeking ballot access, until Baker can decide if the law is constitutional.

In July, while notifying the court of its intention to appeal, the state asked Baker to stay her ruling while the appeal is pending. Baker said she would take the request under advisement, allowing the Libertarian Party to respond. On July 24, the party responded by objecting to a stay.

In a brief filed Monday, the attorney general's office again urged Baker to issue a stay, complaining that its request filed three weeks earlier had not yet been answered.

"This Court has neither denied that motion nor 'afforded the relief requested,'" attorneys for the state said. "That delay has inflicted -- and continues to inflict -- irreparable harm on the people of Arkansas. As a result, the Secretary [of state, John Thurston] intends to ask the [8th Circuit] to immediately stay this Court's erroneous preliminary injunction order."

They wrote: "Absent a ruling by this Court granting the Secretary's motion, the Secretary intends to file that motion on Wednesday, Aug 7, 2019."

On Aug. 8, after nothing new was filed, the attorney general's office filed a notice stating that "because this Court did not issue a ruling .... the Secretary has now sought a stay" from the 8th Circuit.

The new requirements that Baker blocked increase the number of signatures that new political parties must collect on petitions to place their candidate on statewide election ballots.

For the past decade, third parties have needed to collect 10,000 valid signatures to obtain ballot access. But now, under the legislation passed this spring, they must collect a number of signatures equal to 3% of the vote in the previous gubernatorial election -- or 26,746 signatures to get on the 2020 election ballot.

The Libertarian Party's March 28 lawsuit calls the requirements unwarranted and unnecessary. The party also complained about a new 90-day window in which they must collect signatures, and about a moved-up deadline for turning in petitions.

In issuing the injunction, Baker said she hadn't been presented with any evidence to explain the state's interest in the new requirement. The state must show that the new legislation is "narrowly drawn" to protect the state's legitimate interests without infringing on the constitutional rights of a party.

At a daylong June 4 hearing on the party's request for an injunction, Peyton Murphy, a staff attorney for Thurston, testified that a party continues to be regarded as a "new political party" for the next election unless it obtains 3% of the votes for governor or president.

Attorney James Linger of Tulsa, who represents the party, argued that the 3% requirement was struck down as unconstitutional in 1996 and again in 2006 by federal judges in Arkansas, and that nothing has happened since to justify reinstating it.

Linger called the new legislation "a Republican deal," arguing that Republicans, the state's dominant party in Congress and in the state legislature, see the Libertarians as a threat to them. He said votes for Libertarian candidates are believed to take votes that might otherwise go to Republicans, with whom Libertarians are more closely aligned than Democrats.

The attorney general's office complained that Baker is likely to be reversed for ordering Arkansas to certify the Libertarian Party as a political party and allowing it to name candidates for every partisan office if it collects 10,000 signatures.

"It can also lead to voter and candidate confusion, prompting additional, last-minute litigation," the filing said. "To avoid that, Arkansas seeks a stay" of the injunction.