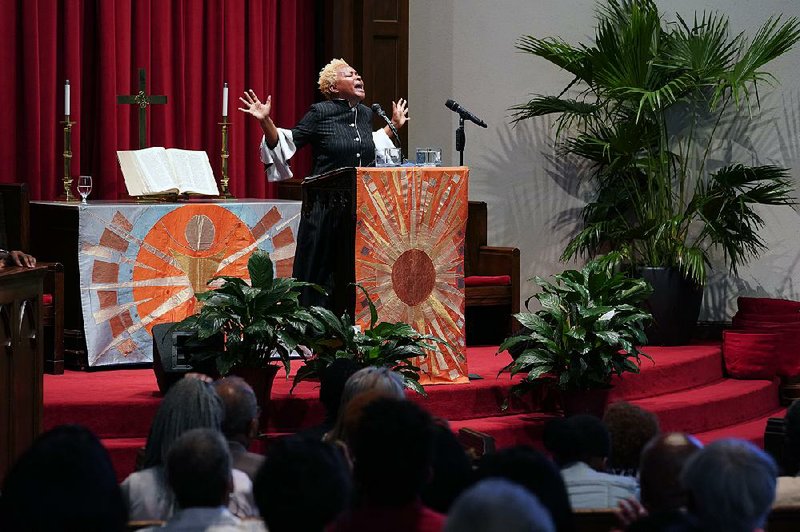 Rev. LaKeesha Walrond, who recently became president of New York Theo- logical Seminary, gives a sermon at Grace Baptist Church in Mt. Vernon, N.Y. Walrond, the first black woman to take charge of the seminary, wants to revitalize the institution by connecting with the community.

NEW YORK -- First Corinthian Baptist Church in Harlem had 300 members and no website when LaKeesha Walrond and her husband took over as pastors. Yet, as many churches have strained to maintain their congregations, theirs flourished: More than 10,000 congregants now come for Sunday services and for mental health programs, yoga classes and a free co-working space.

Now, she has been named president of New York Theological Seminary and is tasked with steering the century-old institution, anchored in Morningside Heights, through a precarious moment. She is the first woman and the first black person to lead the seminary.

Seminaries face a plight similar to churches: Enrollment has waned and the nature of spiritual expression has evolved. Walrond, 47, must prove that she can adapt the lessons she learned in leading a congregation to attract and prepare a new generation of ministers and religious scholars.

The small seminary has played an influential role in New York's religious community and specializes in putting theological education to work in urban settings.

She added: "We need faith everywhere. Faith does not always translate into religion."

Many students who attend the school -- some coming to theological studies for their second or even third career -- seek to learn how to minister to those enduring hardships often concentrated in a big city: poverty, homelessness and addiction.

"We're not here to save people within the four walls of a church," said Aaron Waldron, a first-year student who enrolled after finishing his service in the Army. "We're here to save the world."

Walrond's aspirations for the seminary include adding more online education programs and one day giving it a campus of its own. But her main ambition is to nurture an inclusive environment, boosting those whom she said have often been sidelined by mainstream religion: women and LGBT people.

She is motivated by her own relationship with spirituality; she said her Christian faith has been a source of resilience and solace during tumult in her life.

Yet she also knows well the sting of judgment that can accompany organized religion: She grew up in a church in Texas that did not believe women should serve as pastors, and when she was unmarried and had a child in college, that church cut her off, taking away a scholarship.

Those experiences, she said, molded her approach as a pastor, and now influence her plans for educating others. That is why she insists on inculcating students with the lofty lessons at the core of a theological education while also preparing them for the circumstances they will confront as a working pastor.

"When someone comes to your office because they're in a situation of domestic violence -- what are we going to say to them? How do you empower them? How do you allow their faith to encourage them, in a way, to understand that God does not want them to be in a place where they're beat up every day?"

Across the country, seminaries are racing to transform in order to survive. In recent years, schools have closed or merged. The ones riding out the turbulence, in many cases, have been aggressive in overhauling their offerings and reaching out to new students, said Chris Meinzer, a senior official at the Association of Theological Schools, which includes some 280 schools.

He said that over the past decade, 60% of seminaries have seen their enrollments decline. Many of them are tied to mainline Protestant churches that have experienced concurrent declines in worshippers.

Walrond is eager to shake up the school. She has started off by reviewing programs, aiming to build on the ones that have been successful, such as the seminary's master's program for prisoners at Sing Sing Correctional Facility. (She would like to create a similar program in a women's prison.)

"Our curriculum is going to have to change to meet the needs that continue to arise," she said. "And even if we change, we have to be open to changing again."

Like many of her students, Walrond's route to the seminary was a circuitous one.

Her beliefs about women in the church were reshaped by her professors at Spelman College, a historically black women's college in Atlanta. She spent more than a decade as a teacher and principal in North Carolina public schools before shifting to ministry full time.

She has also written a children's book about establishing boundaries with adults. The project, she said, was motivated by her own experience of sexual abuse by a relative.

In 2004, she moved to New York when her husband, the Rev. Michael Walrond Jr., became senior pastor at First Corinthian, a post he still holds.

On a recent Sunday, LaKeesha Walrond was invited to preach at Grace Baptist Church in Mount Vernon, N.Y., by the Rev. W. Franklyn Richardson.

In a soaring sermon, Walrond offered a simple message to the hundreds of people gathered: "Some will try to disqualify you because of your past," she said. "But I want you to know, God has plans for you."

She listed some evidence, even including surprising turns in her own life.

She went on, "Some would look at me and say I was an unwed mother, but God looks at me and says I'm the president of a seminary."