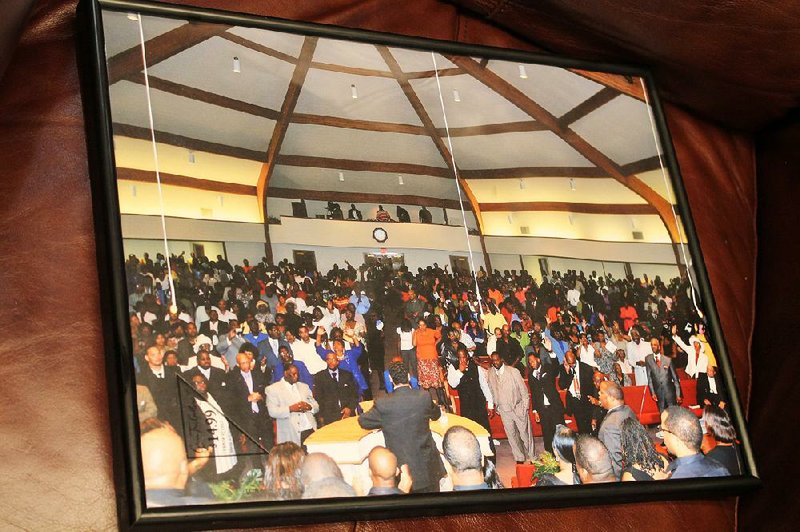 A framed photo of the packed sanctuary of First Baptist Church during a previous citywide revival is among hundreds its pastor, the Rev. William Robinson, keeps in his office. Robinson has pastored First Baptist since 1982, and has hosted the revival at the church for the past 24 years.

More than a thousand people are expected to take part in the revival beginning Sunday at North Little Rock's First Baptist Church, a six-day event devoted to renewing people's faith in Christ amid the harmony of voices from combined church choirs and sermons given by of some of the area's most well-known preachers.

"The revival is second to none," said the Rev. William Robinson, pastor of First Baptist Church, which he said included some of the best preaching to be heard in the area.

Revivals in Christianity originated with the first Great Awakening during the early 1800s. The time of renewed interest in the faith and numbers of converts to the faith came not long before the establishment of the nation's first predominantly black Baptist church in Savannah, Ga., in 1773, under the Rev. George Liele.

The revivals are still an annual tradition in predominantly black churches, but the duration of most has been shortened from seven days to two or three, according to the African American Lectionary. The Lectionary notes that during the past quarter-century the focus has been increasingly on reviving and renewing the faith of those in attendance as well as hearing the guest preachers, many of whom are well-known.

Robinson, who has hosted the revival since 1995, after the church moved to its current location on S.A. Jones Drive in North Little Rock, said there is also a time each evening in which nonmembers are welcome to come forward and recognize Christ as their savior.

The Rev. Jerry Black left Arkansas in 1991 to lead Beulah Baptist Church in Decatur, Ga., but he has returned each year to preach at the revival and is still warmly welcomed and greeted by those he married, baptized, taught and led in worship services when he was the pastor of Greater Paradise Baptist Church in Little Rock.

Black, who in past years was a history teacher at Little Rock's Paul Laurence Dunbar High School (now Dunbar Magnet Middle School), said the revival for him is a reunion each year.

"Every year, coming back, it is a joy and pleasure for me to see so many of the people that I've known and loved across the years," said Black, who will preach Wednesday through Friday.

Black, 65, was one of four preachers in the area who formed a four-church fellowship that flourished with monthly gatherings during the 1980s and early 1990s. Along with Robinson, he partnered with the Rev. Maurice Watson, pastor of Saint Mark Baptist Church in Little Rock during that time, and the Rev. Don Kelly, who was pastor at New Hope Baptist Church of North Little Rock for more than two decades until his death in 1992. Of the four between the "sister city" fellowship they shared, Robinson remains, as the monthly gatherings coalesced into what First Baptist has called its Citywide Revival since the event's debut.

"Rev. Robinson has been the one who has really been the lighthouse keeper," said Black, who said he has observed the evolution of the event. Beyond attendance numbers, he considers the growing "spiritual impact" the revival has on Little Rock and North Little Rock.

In turn, Beulah Baptist Church in Georgia holds an annual revival at which Watson is a regular preacher. At each, he said, the sermons are meant to inspire the audience and hopefully reach those who aren't yet members of the faith.

"The messages are designed to bring hope to people who are in desperate need of really regaining hope or gaining hope, to know that things can get better and -- with the help of the Lord -- will get better," Black said. "The messages are designed to really uplift the people, but also give them scriptural foundation that they can walk away with -- scriptural foundation that they can stand on long after the revival is over."

DeAndre Singleton, spokesman and sound and media engineer for First Baptist in North Little Rock, was a guest at the revival in 2013 after he'd moved to Little Rock from Lake Village to attend college. Singleton had come from a Southern Baptist background in which the "different types of preaching" he experienced at the revival were absent.

"I was able to experience what it was like to have someone preach to a millennial and yet reach the older adults as well," said Singleton, who joined the ministry in 2014 and said he has since felt called to preach.

"So many different pastors all come together for the same reason -- to bring us to Christ, to bring the lost to Christ," Singleton added. They're all supporting the same ministry.

"I had heard about Pastor Black, but I had never been able to really hear him or hear him deliver a message ... being in the sound booth, you can feel the passion and the anointing that he has for the Christian faith and delivering his message."

"This revival is certainly a ministry for the masses," Singleton said. "We definitely need to just revive and give people a sense of hope, a sense of healing, that there is a Christ for our crisis. We are dealing with a lot, and we're not alone."

Black said a number of people travel from out of state to attend, especially from bordering states like Missouri, Texas and Tennessee.

"I pray that everyone will be able to be in attendance," Black said. "I believe God has special treats in store for them." 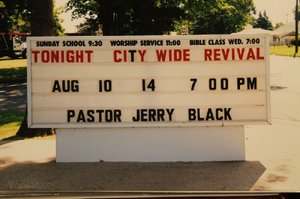 Photo by Special to the Democrat-Gazette
The marquee sign at First Baptist Church of North Little Rock heralds a then-forthcoming citywide revival, a fixture of the neighborhood and the area for more than 20 years. 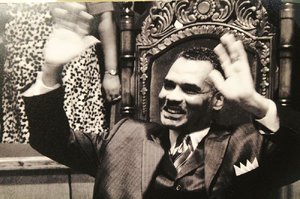 Photo by Special to the Democrat-Gazette
With hands held high, the Rev. Jerry Black, pastor of Beulah Missionary Baptist Church in Decatur, Ga., celebrates the gospel during a past revival held at First Baptist Church in North Little Rock, one that he has preached at annually since its inception in the 1990s. Before his role at Beulah, Black led Greater Paradise Baptist Church in Little Rock for 15 years, and is a mainstay of the event.