Who's that tap, tap, tapping? 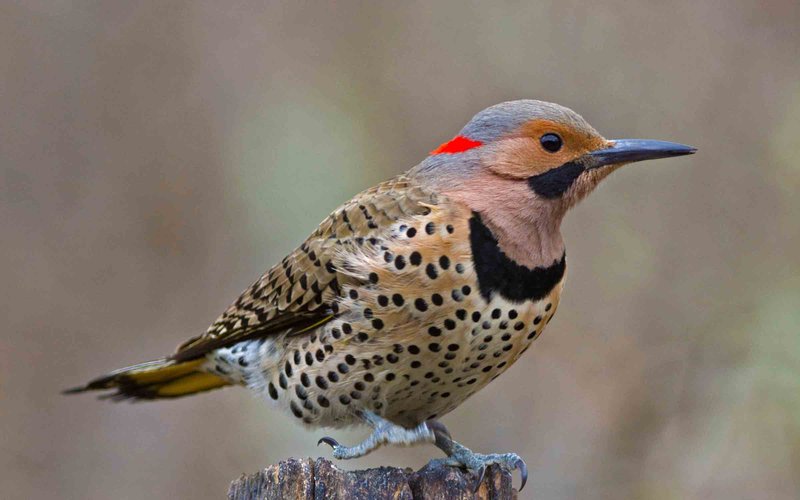 The northern flicker eats ants and is more likely to be seen on or near the ground. (Cornell Lab of Ornithology/Gary Mueller)

I grew up in a part of the world where there was a beautiful green-plumed woodpecker, but the only place to find it was on the label of a brand of hard cider. You would have to venture deep into some old-growth forest to encounter the living article. Perhaps Robin Hood had one as a pet.

When I came to the Washington, I noticed woodpeckers seemed to be as common as pigeons. Well, not quite that common, but they were reliable visitors to trees in the garden and local park. And they flitted about in various shapes and sizes. One challenge was to discern the hairy woodpecker from its doppelganger, the downy woodpecker. The former is larger and has a conspicuously longer bill, but both have striking checkered black and white plumage, and the male of each species has a red patch on its head. The little downy, in particular, is always on the move, dancing around a tree trunk or the bird feeder. It is full of beans, even in the dead of winter, and helps us get through the season.

Trees appear to be simple columns of wood, but they are whole worlds to the woodpecker, a place of shelter, safety and food, teeming with insects on and beneath the bark layer. No wonder these

adapted birds are so adept at the arboreal life. They even have stiffened tail feathers to act as a brace while they hammer away.

In addition to the hairy and downy woodpeckers, there are bigger and brighter woodpeckers happy to entertain the gardener and other nature lovers. The red-bellied woodpecker has a creamy-tan colored body with black and white barred wings, and its head is crowned with scarlet plumage, more on the male than the female. The northern flicker is bigger and so nattily attired that it alone justifies the purchase of a pair of binoculars. This species eats ants, hence its tendency to feed on the ground rather than scamper around trunks.

Then there is the pileated woodpecker, big as an owl and raven black, except for its white wing bars and the scarlet and white head markings. It is so bold and beautiful — like some modern day pterodactyl — that you feel you deserve only to glimpse it once or twice in your life. But it is common in any wooded area in the East and even in leafy gardens, where it will show up at the bird feeder.

In any of these species, I find that familiarity does not breed contempt.

I put this down to three factors: the extraordinary colors and patterns of their plumage; their agility on and around trees; and their capacity to turn their beaks, skulls and necks into rapid-fire chisels. In the natural world's symphony orchestra, woodpeckers are the percussionists. 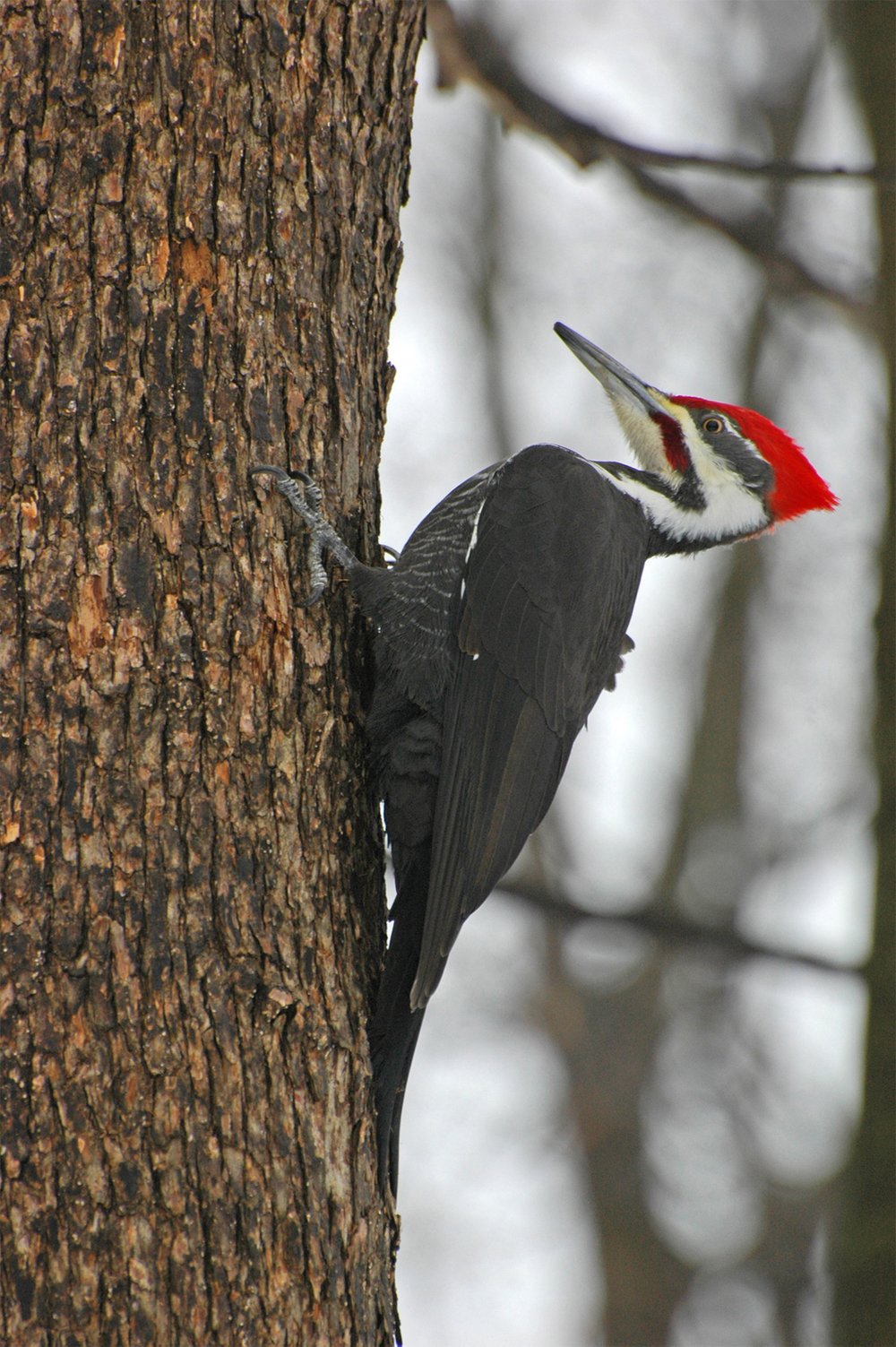 The common but never boring pileated woodpecker. Its drumming can be heard from a mile away. (Cornell Lab of Ornithology/Louis Brunet)

It is Washington's urban forest that provides this interface between us and the woodpecker. Apart from the abundance of species, we see woodpeckers frequently because much of the tree canopy has dead trees or branches, and it is in deadwood that woodpeckers excavate a hole to nest.

European cities tend to be less sylvan and the trees more manicured. "We keep deadwood on the trees, and that's what woodpeckers thrive on," said Ken Rosenberg, conservation scientist at the Cornell Lab of Ornithology in upstate New York. "I have had six species of woodpeckers nesting in my yard over the years in suburban Ithaca."

Local bird counts in greater Washington show healthy populations of common species, said Stephanie Mason, senior naturalist at the Audubon Naturalist Society in Chevy Chase, Md. She attributes this to more people feeding woodpeckers in winter, including the suet bricks the birds love so much, and to the aging urban forest, with all its dead branches. The arrival of the emerald ash borer has killed hundreds of trees in suburban Maryland, providing woodpeckers with deadwood and also loads of grubs to feed on. One of the signals of an infected tree is the appearance of light patches on the bark, caused by woodpecker feeding.

The cavities that woodpeckers create and later abandon provide living space for other creatures — birds such as titmice, nuthatches and wrens, but also for flying squirrels, Mason said. 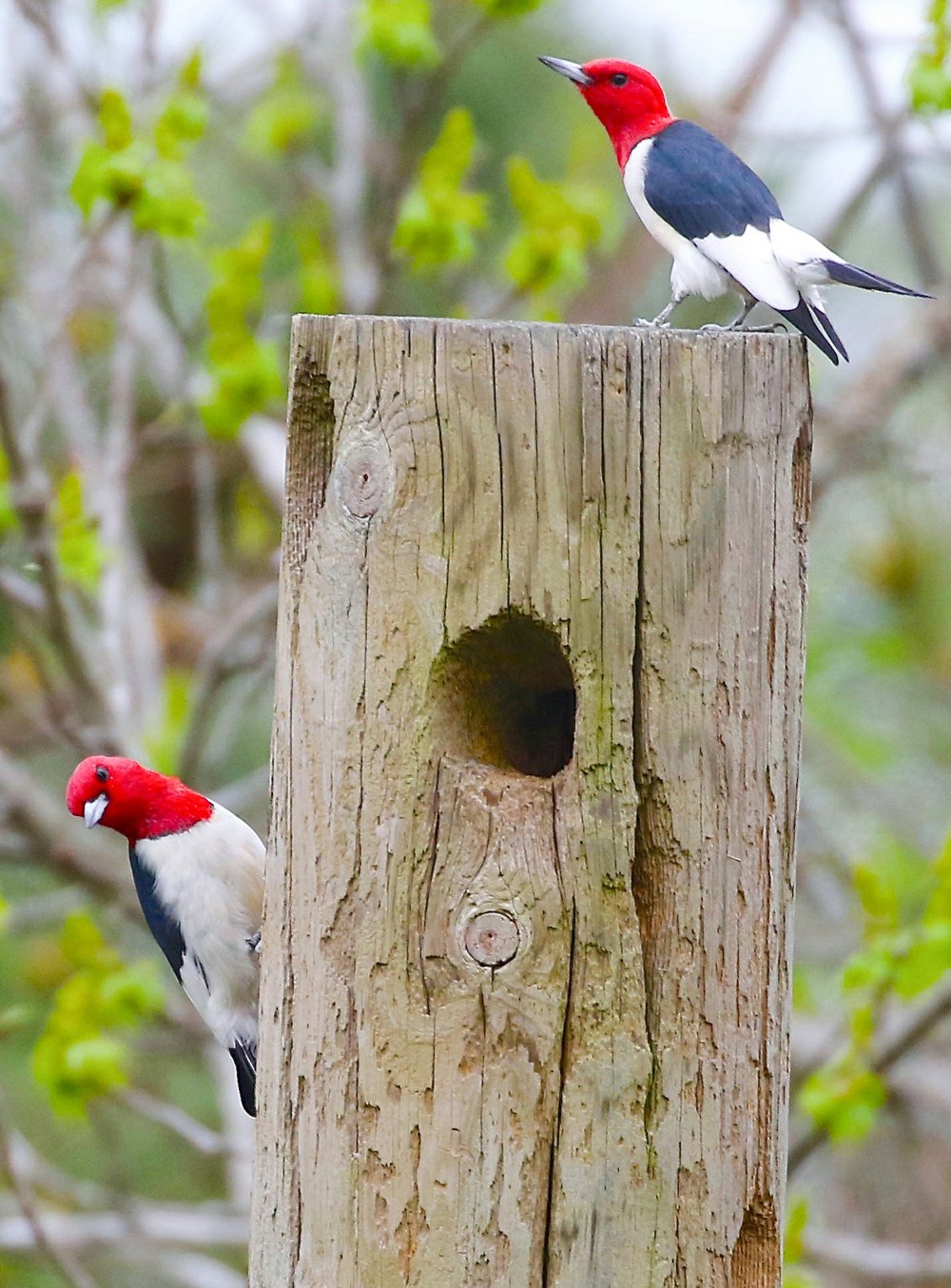 Red-headed woodpeckers are nomadic and declining in numbers. They hoard acorns and rely on abundant nut crops. (Cornell Lab of Ornithology/Priscilla Morris)

Woodpeckers will sometimes alight on your house and start their rat-a-tat heading. This worries people who think the bird is doing serious damage to the home or has found an abode riddled with insects. It is best to adopt a more relaxed attitude about animals around the home. I think a skink (a lizard) would be fine wandering into the kitchen, for example, but not a skunk.

The yellow-bellied sapsucker knocks neat lines of holes in the trunks of trees, to the consternation of some gardeners, but the sap loss is minimal, and, besides, there's nothing you can do about it. The only regret is that the marking is more obvious than the bird itself, which has a buttery yellow breast plumage and flashy red head markings.

The prettiest species — and probably the one you are least likely to see — is the red-headed woodpecker. When I saw one, I thought I had been transported to the tropics. It is a compact, but not small, bird, with a white body, inky blue wings splashed white and a head that is entirely scarlet. You find nesting pairs in open woodlands, pine savannas and stands of dead trees — snags — in swampland. It was in the last habitat that I found a small colony of them a few years ago, about midway along the Indian Head Rail Trail in Charles County, Md. I was on a bicycle at the time, but I returned last week on foot.

It took me about an hour to reach the spot, and, along the way, I came across a world a little removed from the downtown garden experience, including trailside areas full of sweet gum seedlings, wild carrot and jewelweed.

The butterfly life was rich. I have never seen so many zebra swallowtails, an indication of abundant pawpaw shrubberies, or red admirals for that matter. A family of turkeys rustled quietly through the woodland floor, and a snapping turtle blithely crossed from the ditch on one side of the trail to the other side.

The snags are on the far end of a wetland and are full of woodpecker cavities. I saw an osprey, a great egret, several red-winged blackbirds, but no woodpeckers.

Most woodpecker species are doing all right, but the red-headed woodpecker, which is migratory and hoards acorns, is not. "It has a declining population, and we are not sure why," Rosenberg said. It winters in bottomland hardwood forests in the Southeast.

Its apparent absence was a disappointment, to put it mildly.

On the way back, I found another collection of snags, again with woodpecker holes but no birds. A dark, chirpy songbird perched high on one of them, and when I raised the binoculars, it revealed itself as an indigo bunting. This consoled the failed quest for the red-headed woodpecker. Just a little.