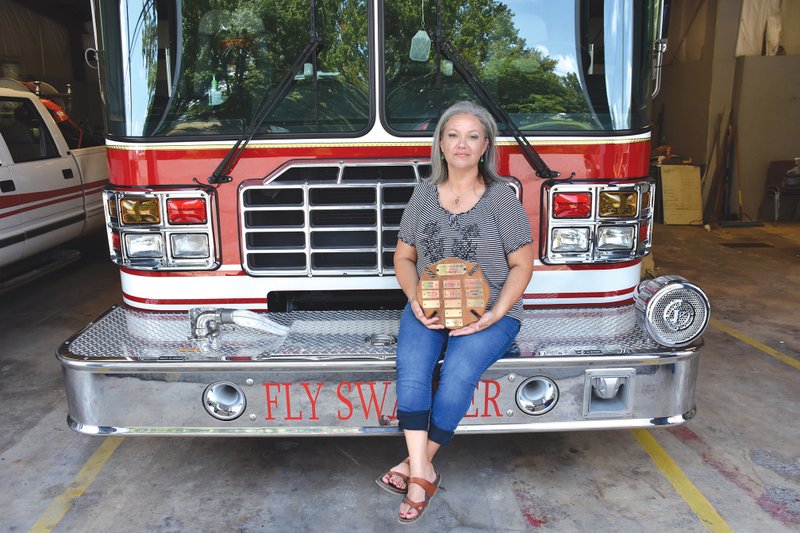 Aprill Reaves, a former volunteer firefighter, sits on a Ward Fire Department engine and holds an old plaque with names of donors to the ladies auxiliary, which became inactive in about 2002. Reaves re-established the Ward Fire Department Ladies Auxiliary and serves as its president. She said members and donors are needed. Her husband, Tony, was hired in February as the full-time fire chief. ( Staci Vandagriff)

Aprill Reaves knows how much a ladies auxiliary can support a fire department. She is married to the new Ward fire chief — and she’s a former volunteer firefighter.

Reaves’ husband, Tony Reaves, was hired in February as the full-time chief of the Ward Fire Department. In April, she rallied the wives and restarted the department’s auxiliary, which had dissolved.

“We really wanted to get back into the family aspect of the Fire Department because that’s what we are — one big family,” Aprill said.

The Ward Fire Department had a ladies auxiliary from about 1988 to 2002, she said. Aprill is president of the auxiliary and is working on the paperwork needed for the group’s nonprofit status.

“The purpose behind the auxiliary is to help the volunteer department raise money for things they need,” she said.

For example, the auxiliary purchased a tank for one of the tanker trucks. On the list now are thermal imagers, which can help with search and rescue, Tony said, or to find hot spots to make sure a fire is out, and iPads for the three fire engines to utilize the emergency-reporting program.

The auxiliary is for much more than monetary support, though, Aprill said.

Or, her husband said, “Coffee — you’ve got to have the coffee.”

“We’re also the support for each other as fire wives,” Aprill said, because they share common experiences.

Aprill has a unique insight into the firefighters’ roles. She and her husband were both volunteer firefighters in Vilonia before Tony took the chief’s position in Ward.

Aprill and Tony met at Cabot High School, and Tony was a junior firefighter. They married in 1991 soon after graduation.

Tony’s father was a captain at the Cabot Fire Department, “so Tony was pretty much raised in the fire service all his life, along with our boys,” Aprill said.

The couple have four sons, ranging in ages from 19 to 26, and they are all volunteer firefighters, she said.

Aprill said her husband encouraged her to become a firefighter, and she has been certified through classes and training at various fire departments.

She has responded to everything from a fatality vehicle accident near Vilonia to grass fires, she said.

“It’s a lot of hard work. All the guys on our department are volunteers, and they’re taking time away from their families, and sometimes it’s late at night or early, early in the morning, and some of them go to work,” Aprill said.

“As soon as they get done with a call, they’re going home, changing clothes and doing their 9-5 job,” she said. “I was a young fire wife. When Tony came into it, I thought, ‘Why do you dedicate your time? You don’t get paid for this. Why do you do it?’

“There’s so much dedication that they don’t get a lot of credit for. … I wanted our ladies auxiliary to be that support group for these young wives and young families. Sometimes you need to be the shoulder to cry on. I want [the auxiliary] to be the family they feel comfortable doing that with.”

Tony said he’s excited about the ladies auxiliary being reinstituted “for all the women, the firefighters’ wives who stepped up to help the Fire Department. They see what we go through and what we need to make our job a little better than it is.”

The majority of the Fire Department’s runs are medical calls, Aprill said.

“CPR is a must-have [for firefighters]. We all get trained in [checking] blood pressure. … We are very blessed to have several [firefighters and auxiliary members] who have worked with ambulances in the past or are nurses,” she said. “These guys see a lot of things we could never imagine.”

Aprill said her background as a volunteer firefighter gives her an advantage.

“I can change out air packs; I know what the equipment is,” she said.

If firefighters need something at a scene, Aprill said, she can take it to them.

“Most wives have been around [firefighting] a long time,” she said.

Ashlynn Madding, vice president of the auxiliary, said she has been involved in fire service “almost since I was born.”

Madding’s husband, Tyler, is assistant chief of the Ward Fire Department — and when she was growing up, so was her father, Allen Marshall. He is now a captain in the Jacksonville Fire Department.

Madding, a registered nurse at the University of Arkansas for Medical Sciences Medical Center in Little Rock, said her husband is the senior master plumber for the Pulaski County Special School District.

Madding said she was happy to jump onboard when Aprill talked about restarting the auxiliary.

“We had kind of talked about it when Tyler and Tony got their new roles,” Madding said. “When [the auxiliary] faded away, we said, ‘This is something we’d really like to start back up.’ We took the ball and ran with it. We want to have a family atmosphere, first and foremost.”

Being the spouse of a firefighter, Madding said, “you lose family time. It’s a way for ladies and kids to support [the firefighters] in their roles.”

Although the name of the group is the ladies auxiliary, Aprill emphasized that it’s for anyone who supports the Fire Department.

“It’s not just ladies; that’s just part of the tradition of the Fire Department,” she said. “It’s definitely not just for the girls.”

Both women said any family member can donate time to the auxiliary. Aprill said the department has honorary members who donate money and items to the organization.

“We have grandparents … old firefighters who still live around here,” she said, adding that they have offered to help.

Auxiliary meetings take place at 7 p.m. the first Tuesday of each month at the Central Station, 109 Moore St., and Aprill said the firefighters’ children are usually there.

“We like for the family to be involved,” she said, adding that the age requirement for member status is 18.

There are 20 firefighters, including her husband, Aprill said. The auxiliary has at least 11 members to date, she said, and she encourages anyone interested in joining to contact her at wfdladiesauxiliary@yahoo.com or (501) 286-0483.

“Part of the chief’s deal is to really become more community-oriented, let the community see us and be able to put a name with a face,” she said.

Aprill said she is happy in her role as president of the auxiliary, and she doesn’t plan to be a volunteer firefighter right now.

“I could be, but I think I’m going to leave it to the guys,” she said, “but if you need somebody to drive a truck, I might know somebody. I was pretty good at it.”