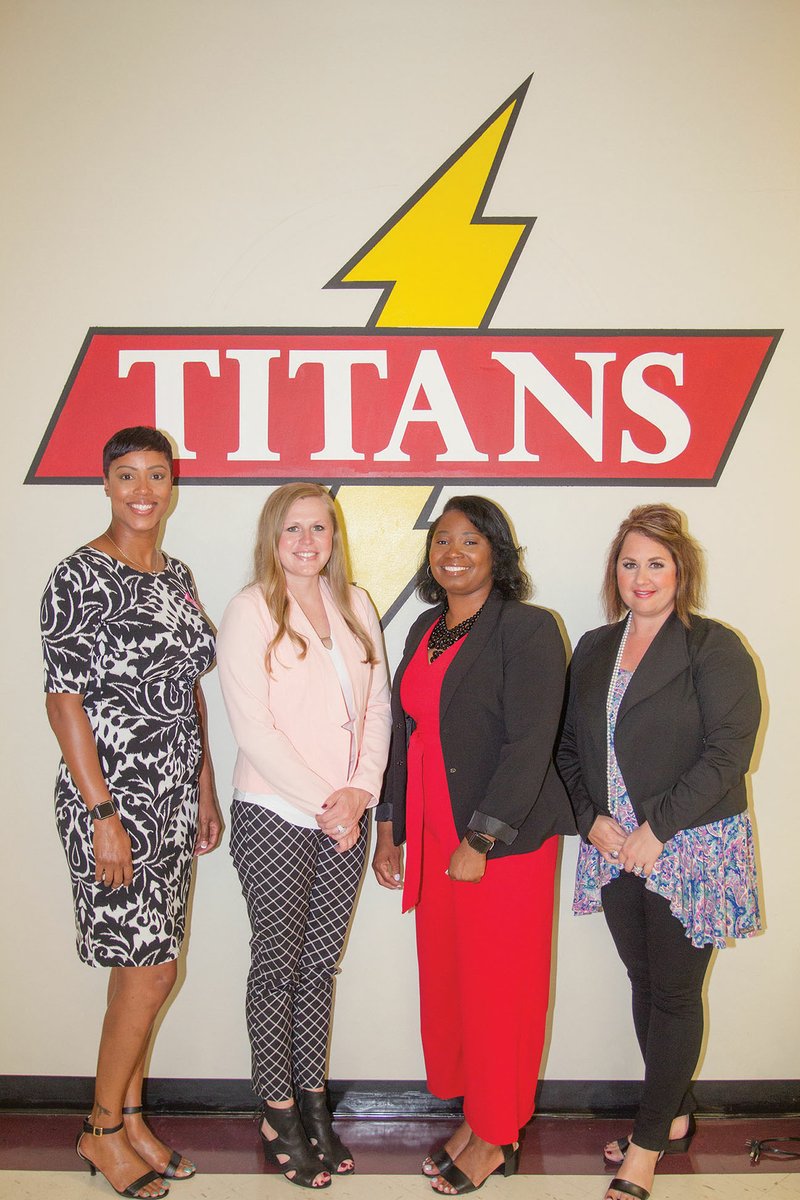 JACKSONVILLE — When the Jacksonville North Pulaski School District starts classes Wednesday for the 2019-20 school year, four new principals will be in place.

“They are all go-getters whom we have complete confidence in,” Hodges said. “When you add their skill sets to the other two returning elementary administrators, you have a dynamic group of leaders who are all about the kids.

“We like to recruit and retain as much talent as we can possibly get, and all four of the ladies are extremely talented.”

Lindsey Jones, a 2000 graduate of Jacksonville High School, comes to Pinewood after being the principal at Homer Adkins Pre-K. She is taking the place of Karen Norton, who now works for the Wilbur D. Mills Education Cooperative.

Jones is beginning her 16th year in education. She started as a teacher at Arnold Drive Elementary School at Little Rock Air Force Base, where she taught prekindergarten through second grade.

Jones also taught kindergarten through fourth grade at Pinewood before being hired as assistant principal at Adkins.

She’s excited to transition from the pre-K facility to being a principal at an elementary school, Jones said.

“I am looking forward to building on the system and structures that are currently in place by the outgoing principal,” she said. “She and her staff worked hard to create a culture of high learning for students and staff. I am excited to take them — students and teachers — from where they are currently and continuing to grow them. I want to continue the pattern of building strong, sustainable relationships with the staff, students and their families, and we want to grow the students and create lifelong learners who will eventually give back to our community.”

Jones earned a bachelor’s degree in early-childhood education from the University of Central Arkansas in Conway, a Master of Arts in Teaching degree from Harding University in Searcy and a master’s in educational leadership from Arkansas State University in Jonesboro.

Jones and her husband, Kenny, have been married for eight years. They have a son, Colton, 5, who will be in kindergarten this year at Pinewood.

April Turner, a 1999 graduate of Magnolia High School, comes to Warren Dupree after serving as assistant principal at Jacksonville Middle School for four years. She replaces Jamie Reed, who left the district following the 2018-19 school year.

“I am truly excited for this year,” Turner said. “I can’t wait to meet my scholars and their families at open house.”

This is Turner’s first head-principal job.

“I will ensure that all students work, discover, excel and soar through meaningful, rich learning,” she said.

This is Turner’s 15th year in education, having taught first, second, third and fifth grades. She was also a literacy facilitator for two years.

Shana Loring, who is originally from Illinois, is a graduate of Jacksonville High School. She comes to Murrell Taylor for her first principal’s job. She is replacing Myeisha Haywood, who is now elementary alternative learning education administrator for the Jacksonville North Pulaski School District.

“I have been in education for 19 years,” she said. “I have held a variety of positions in public schools — secretary, bookkeeper, teacher, instructional facilitator, assistant principal, curriculum coordinator and now principal.”

Loring started her career in the Pulaski County Special School District and also worked in the Little Rock School District for 14 years. This is her third year in Jacksonville.

“I am looking forward to working with parents, teachers and students to create a culture of excellence at Taylor,” Loring said. “I grew up in this neighborhood. My mother worked at this school, so I already feel like I’m a part of this community and want to help Taylor be the very best it can be.”

Loring said she is passionate about education.

“I am passionate about children and sincerely believe that education is the pathway to greatness,” she said. “I want to ensure that these students have everything they need to be successful, productive, global citizens.”

Loring and her husband, Keenan, have four children: Kendal, Kadyn, Keenan Jr. and Kiara. They also have three grandchildren: Kingston, Kennedi and Kruz.

Megan Brown comes to Adkins after serving as assistant principal at Bayou Meto Elementary School for a year. She replaces Jones, who is now principal at Pinewood.

Brown is from Jacksonville and attended Sylvan Hills High School in Sherwood. She earned a bachelor’s degree in early-childhood education from the University of Arkansas at Little Rock and a master’s degree in educational leadership from Arkansas State University in Jonesboro.

This is Brown’s sixth year in education. She taught kindergarten at Dupree for three years. She also taught first grade at Arnold Drive Elementary School in Jacksonville.

“This is my first year as a head principal,” Brown said. “I look forward to working with teachers, students and parents collaboratively to focus on high levels of student learning, social and emotional support, and kindergarten readiness. We will focus on implementing various activities and programs to increase parental involvement that incorporates parents into the instructional program.”

Brown and her husband, Jeremy, have two children: Jeter and Skylar.