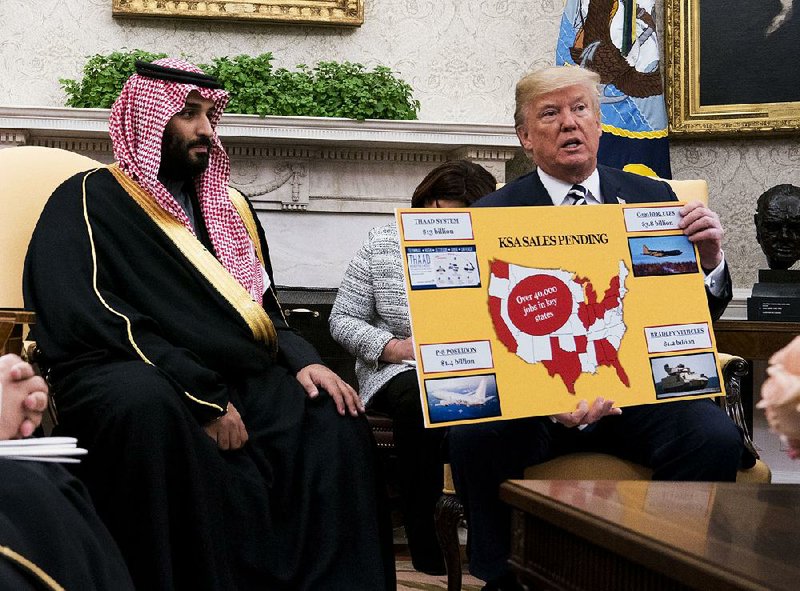 President Donald Trump has presented international arms sales as a boon for American business, and in southern Arkansas, the numbers bear him out.

Exports of Arkansas arms and ammunition and related materials soared from $84.9 million in 2017 to $469.6 million in 2018, according to the Arkansas Economic Development Commission.

That's an increase of 453.13%, the state agency said, crediting IHS Markit's Global Trade Atlas as the source of its data.

Most of that money can be traced to or through the Camden area, the center of the defense industry in the Natural State.

Critics warn that the transactions help to prop up authoritarian regimes and that civilians often suffer when the weapons are used.

For trade purposes, "arms and ammunition" would encompass guns, grenades, cartridges, projectiles, bombs, mines, missiles and torpedoes, plus related parts and accessories, although not all of these are part of what is made in Arkansas and sold to Saudi Arabia.

Saudi Arabia, which has launched bloody attacks with U.S. assistance in neighboring Yemen, is largely responsible for the surge in Arkansas exports, state officials say.

Arms shipments there climbed nearly 20-fold between 2017 and 2018, enough to move Saudi Arabia into the top tier of Arkansas export destinations.

The country was Arkansas' 19th-largest foreign market in 2017, the Economic Development Commission said. Last year, it climbed to No. 3 on the list, leapfrogging far larger nations, including China, Germany, France and Britain.

"Saudi Arabia has jumped, so far, as one of our top export countries, and it's because of the missile systems that are done right there in south Arkansas," said Mike Preston, the Economic Development Commission director.

Other Persian Gulf countries have also been buying from Arkansas.

The United Arab Emirates, an ally in Saudi Arabia's Yemeni conflict, imported a total of $40.7 million in Arkansas arms and ammunition in 2017 and 2018, according to the state Economic Development Commission.

Another $53.5 million was exported to Oman, Saudi Arabia's neutral neighbor, during the same period, the data show.

In May 2017, during his first international trip as president, Trump traveled to the Saudi capital, Riyadh, and met with Saudi King Salman, signing what was described as a $110 billion arms deal.

Critics have questioned whether the figure is inflated, arguing that some of the deals had actually been struck when Barack Obama was president. Other portions of the agreement, they argued, were nonbinding or would take years to complete.

Since Trump's announcement, however, Arkansas and overall U.S. arms and ammunition sales to Saudi Arabia have clearly accelerated.

In 2016, Obama's last full year in office, the state exported $8.3 million in arms and ammunition to the oil-rich kingdom. That number doubled in 2017 to $17.5 million and soared to $335.4 million in 2018, according to the state Economic Development Commission.

"It has a major impact on the Arkansas economy," said James Lee Silliman, executive director of the Camden Area Industrial Development Corp.

Its U.S. purchases in this category have more than quadrupled since 2015.

Arkansas was the nation's third-largest exporter of arms and ammunition last year, trailing only Arizona and North Carolina, according to the U.S. Census Bureau.

If the Trump administration has its way, weapons sales to Saudi Arabia will continue for the foreseeable future.

The kingdom plans to buy a $15 billion Terminal High Altitude Area Defense system. Part of the work on that system is done by Lockheed Martin workers in south Arkansas.

The escalating arms sales are a cause for concern, according to the Right Rev. Larry Benfield, bishop of the Episcopal Diocese of Arkansas.

"The Episcopal Church, since about 1991, has been deploring the reintroduction of weapons of all kinds into the Middle East by any nation, and we've been asking our government to restrict and control all international arms sales and distribution," he said.

The latest sales are particularly troublesome given the Saudis' attacks in Yemen, he said.

Groups linked to al-Qaida and the Islamic State are now operating within the country as its 4-year-old civil war continues.

Last year, the Episcopal church's general convention urged the U.S. government "to avoid supplying munitions, military equipment or technology that could be used in the conflict, as well as logistical and financial support for such transfers."

"My analogy would be that it is like setting a gas can next to a fire," he said.

The sales raise ethical questions, not just economic ones, according to Gregory Gause, head of the international affairs department and a professor at Texas A&M University's Bush School of Government and Public Service.

"Even when we sell weapons to democratic allies in NATO or Japan or Australia, they are still weapons, instruments of war. They are designed to kill people. In an imperfect world they are necessary, at least in my view, but their sale (or their use) is never morally neutral. We have to have good reasons to sell them, besides making money," Gause told the Arkansas Democrat-Gazette in an email.

Saudi Arabia is "not a democratic regime and does not share fundamental American values on a range of issues," Gause wrote.

But it is also a longtime partner with the U.S. and a longtime adversary of Iran, he noted.

"If you think that the Middle East is an important part of the world for American strategic interests, it makes sense to have allies and partners there who will work with the U.S. in trying to secure those interests. I would argue that, on balance, the U.S. does have important strategic interests in the Middle East and Saudi Arabia, again on balance, has been willing to work with us to secure those interests," he wrote.

Saudi Arabia is also "one of the few Arab states capable of contesting for regional influence with Iran," Gause noted. Arm sales to Saudi Arabia "signal an American commitment to prevent Iran from dominating the area," he added.

Asked whether the Saudi regime can be trusted to use the weapons in a responsible fashion, Gause wrote: "The evidence from Yemen is that the answer is no. The United States needs to insist on much tighter safeguards in terms of the risks of civilian casualties in the Saudi campaign in Yemen."

Saudi Arabia has been a U.S. ally and oil exporter for decades.

But Saudi intervention in Yemen's civil war and its killing of journalist Jamal Khashoggi have fueled opposition to increased weapons shipments.

There have been 17,640 civilian casualties since the war started in Yemen; 10,852 of those were caused by Saudi-led airstrikes, the U.N. official said.

Facing opposition on Capitol Hill, Trump has used his powers under the Arms Export Control Act to sidestep congressional critics.

Earlier this year, the House and Senate approved a resolution to block an $8.1 billion arms sale to Saudi Arabia and other countries.

Trump vetoed the measure. His critics tried and failed to override the veto late last month.

Arkansas' two Republican U.S. senators, John Boozman of Rogers and Tom Cotton of Dardanelle, had supported Trump's initial decision to approve the weapons transactions, rejecting a congressional resolution that would have blocked the purchases.

Once it had been approved in both chambers and been vetoed by the president, the two Arkansans voted "no" again, helping to uphold the president's veto.

In an interview after the vote, Cotton said scaling back Saudi military sales would be counterproductive.

"Saudi Arabia has been an important partner of our country going back 70-plus years. And at a time when our common enemy, Iran, is literally shooting down our aircraft and sending missiles into Saudi Arabia, we should not be withholding the arms that our partners need to try to defend themselves and our common interests," he said.

In an interview, Boozman said he supported the arms sales because he believed it was right to do so, not because of the economic ramifications.

"It's certainly good for the defense industry," Boozman said. "That's not a reason for me to vote for it. If I felt like the Saudis were indiscriminately killing people, we should not do that."

"I visited with everyone from the head of the CIA, the national intelligence advisor ... [and] our secretary of defense at the time. The list just goes on and on. Their feeling is that we can prevent loss of life by the United States staying actively engaged," he said.

The targeting information the U.S. provides has decreased the number of civilian casualties, Boozman said.

"The Saudis are flying missions now, making attacks, where they've actually turned around and come back because of concerns... [about] civilian loss of life," he said.

"That's something that's outside of our wheelhouse," the Arkansas Economic Development Commission's Preston said. "Those are decisions that are made at the federal level, something that we, as a state, are not going to weigh in on."

While foreign weapons sales are climbing, there's also been a resurgence in U.S. military spending since Trump took office.

In the Camden area, defense contractors expect to be busy.

In April, Aerojet Rocketdyne broke ground on a new solid rocket motor facility. The company, which was already producing 75,000 solid rocket motors each year at its Arkansas site, predicted its 800-person workforce would eventually grow to 900.

Given the Camden area's strong workforce and the state's pro-business climate, "it makes a lot of sense to do business in Arkansas right now in the aero-defense industry," Preston said. 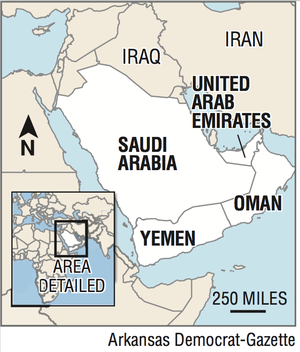 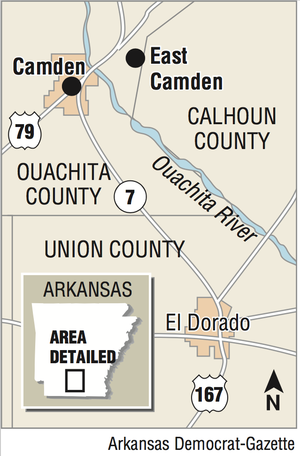 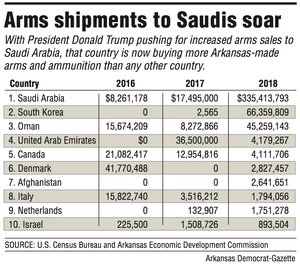 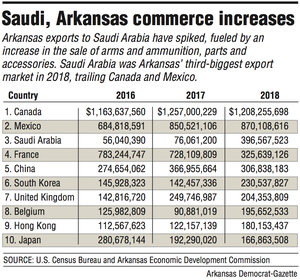