'Derry Girls': The lighter side of life in a conflict zone 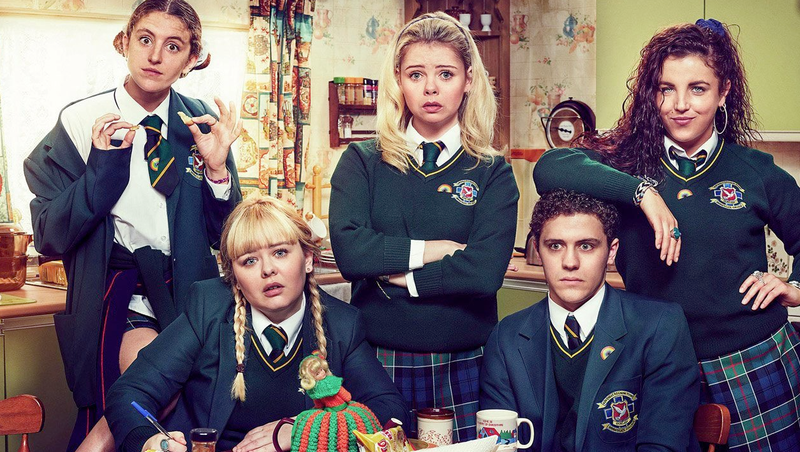 LONDON -- When Lisa McGee was 13, she wrote a letter to Chelsea Clinton. It was November 1995, and President Bill Clinton was scheduled to visit the city of Derry in a show of support for Northern Ireland's peace process. It would be the first time a sitting president of the United States had come to the troubled region.

In an interview, McGee, creator of Derry Girls, recalled that she saw an opportunity to make a new friend. So she wrote to the president's daughter to invite her to see a film at the city's Strand movie theater.

"She never replied," said McGee, now 38. "The innocence of that. Living in this place that's violent and scary, but we were these eejits [idiots] running about writing letters to Chelsea Clinton."

That missed connection makes it into the final episode of the second season of Derry Girls, a hit sitcom streaming on Netflix. But, in a tweak to history, the show's Catholic schoolgirl heroines -- Erin, Orla, Clare and Michelle -- invite Chelsea Clinton to sample the wave machine at the local pool instead. ("I hope she remembers her swimming cap," Orla worries. "They've got dead strict ...")

In the Derry Girls universe, the mundane and the profound sit side by side. Cease-fires, bombings and kidnapping are given equal narrative weight to teenage crushes, field trips and visits to the chip shop, which is to say that they are barely given weight at all.

In the first episode of the first season, a character is distraught at news of a bomb on a bridge because it means she can't get to the tanning salon. In a subsequent scene, when the girls' school bus is stopped by British soldiers, one of them stares down the barrel of their machine guns -- and flirts. In the second season, a scuffle at school prom is intercut with euphoric street scenes after the 1994 cease-fire by the Irish Republican Army.

McGee based the show on her own experience of growing up in Derry. The city, which is also called Londonderry by unionists who want the region to remain part of the United Kingdom, was a maelstrom of sectarian violence and adolescent angst in the 1990s.

She remembered key events in "the Troubles," as the conflict was called, "like they were yesterday," she said: the 1994 cease-fire, Clinton's visit and the 1998 Omagh bombing. "But a lot of it for me was just having to go a different way to school because of a bomb scare," she said.

Derry Girls debuted on Channel 4 in Britain in January 2018 and was an instant hit: It became the most watched television show in Northern Ireland since records began in 2002, with a 64% audience share. On Netflix, it attracted a global audience.

In April 2018, Gleann Doherty, a tour operator in Derry, added a "Derry Girls" guided walk to his repertoire. A 90-minute tour around the show's locations, it was particularly popular with fans from the United States, Canada and New Zealand, he said, adding that many international viewers said they watched the show with subtitles to decode the accent and slang.

"It's now my second most popular tour, after the Bogside tour," Doherty said.

The show has been commissioned by Channel 4 for a third season, which McGee is writing now. In time, she said, she would like to take the story up to the Good Friday Agreement that ended the conflict in 1998.

What makes Derry Girls stand out is the light touch it uses to deal with the heavy hand of history. "We couldn't present that dreary Northern Ireland again, where it's always men in leather jackets, everything's gray and nobody has a sense of humor," McGee said.

Seamas O'Reilly, a writer whose memoir about growing up in Derry in the 1990s, Did Ye Hear Mammy Died?, will be published in March, called the show "the first bit of good publicity that Derry has had in 20 years."

"It shows it as a very boring, normal, mundane place -- with teenagers, discos and funny neighbors," he said. "It's not like Sarajevo with everyone sleeping on sandbags. It captures very well that Derry is a chirpy, well-meaning place, but it also has a legacy of so much trauma."

The second season ends with archive footage of President Clinton's 1995 speech in Derry: "You have so much more to gain by working together than by drifting apart. Have the patience to work for a just and lasting peace."

It was a deliberate choice, McGee said, in the light of the current turmoil in Northern Ireland over Britain's impending departure from the European Union, known as Brexit.

Derry is on the border with the Republic of Ireland, which is a member of the bloc, and in the 2016 referendum, 78% of voters in Foyle, the parliamentary district that contains Derry, favored remaining in the European Union. Many fear that the return of a hard border between Northern Ireland and the Irish Republic will inflame sectarian tensions and threaten stability.

"There's always a belief in your head, when you're from there, that it could turn, because you've seen it turn before," McGee said. "It's made me double down on how important peace is."

The killing of Lyra McKee, a journalist, by a dissident republican group called the New IRA during riots in the Creggan area of the city in April was a grim marker of the city's current problems and the dangerous disaffection they can breed. Foyle has an unemployment rate of 5.2%, more than twice the average in Northern Ireland. In 2017, Derry was listed last of 57 United Kingdom cities surveyed by accounting firm PricewaterhouseCoopers in its "Good Growth for Cities" report.

"I don't think I've ever seen the people of Derry this angry," McGee said of the aftermath of the murder. "There was a very clear message being sent: that we weren't going back."

The famous mural in the city that reads "You are now entering Free Derry" and features in the opening scenes of Derry Girls was graffitied with the words "Not in our name. RIP Lyra" in the days after the shooting.

"To paint over a dissident republican slogan is a very, very brave thing to do," McGee said. "And it's ordinary people doing it. That has never happened before."

The city has a new mural now, too. In January, a 30-foot-high painting of the sitcom's lead characters was painted on the side of Badgers Bar on Orchard Street. It's where Doherty ends his Derry Girls tour, and it has become a magnet for tourists and a symbol of pride for city dwellers.

"I'm just determined to tell positive stories about where I come from," McGee said. "What happened in Creggan that night -- nobody wanted it, the people who did it represent nobody. I feel it's my responsibility to show Derry for what it really is."

Print Headline: The lighter side of life in a conflict zone