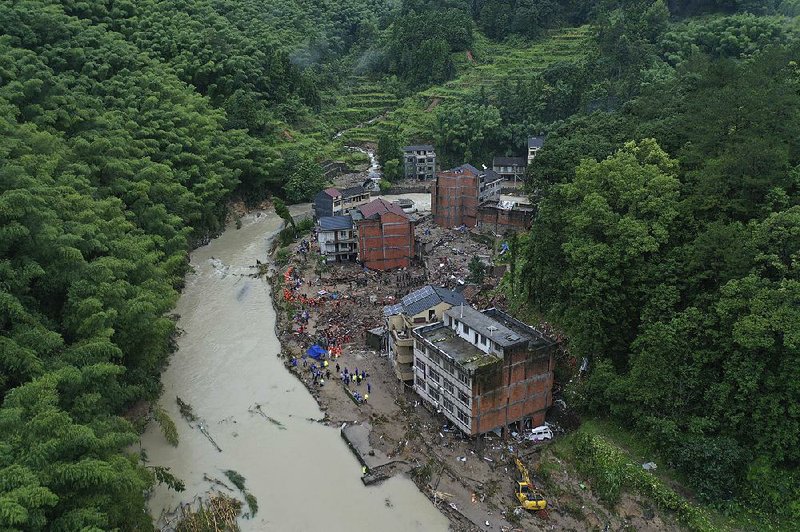 Another 20 people were missing after Typhoon Lekima hit land at 1:45 a.m. Saturday in Zhejiang province, the official Xinhua News Agency said. It said more than 200 houses collapsed and that 3,200 were damaged.

The deaths occurred in Yongjia County on the outskirts of Wenzhou, a major port city, the news agency said. A river blocked by a landslide rose to a level of 30 feet within 10 minutes, trapping 120 villagers, Xinhua said.

More than 1 million people were evacuated before the storm struck, including 253,000 people in Shanghai.

The storm struck China after veering north of Taiwan, where city and county governments had canceled work and classes on Friday in anticipation of heavy rainfall and strong winds. With the typhoon tracking toward the Taiwanese capital, Taipei, and other major cities in the area, shoppers cleared grocery store shelves of fresh produce in anticipation of being stuck indoors for the day.

China issued a red alert along the coast, the most serious of its four possible typhoon warnings, before the storm arrived. A red alert authorizes officials to order evacuations, suspend train and air travel and force ships back to port.

Trains heading to and from the Yangtze River Delta region out of Beijing were also canceled.

Authorities in the eastern province of Shandong said torrential flooding was likely in parts of the province for several days, adding that the downpours would also help ease drought concerns and replenish reservoirs.

Authorities in Jiangsu province said operations were underway to increase drainage of major lakes and ports in the region to draw down water levels before the rainfall arrived, according to local media reports.

Forecasters had predicted that heavy rain and gale-force winds would hit Shanghai late Friday and continue until today. Shanghai residents were seen using tape to reinforce windows. More than 25,000 tourists were evacuated Thursday from Putuo Mountain, southeast of Shanghai, according to local media reports.

Lekima, downgraded to a tropical storm, was heading slowly northward along China's east coast this morning.

Information for this article was contributed by Paul Mozur and Amy Qin of The New York Times and by staff members of The Associated Press.