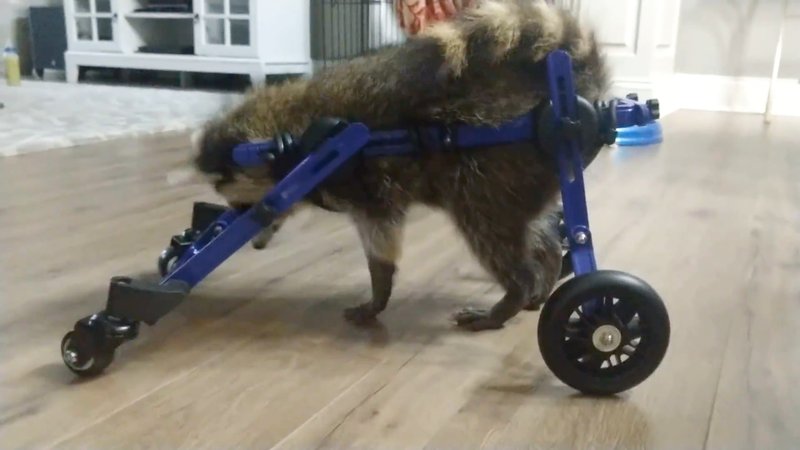 Vittles, a baby raccoon in Arkansas, takes her first steps in her new wheelchair.

A baby raccoon from Arkansas that was left unable to walk after suffering a brain injury experienced the freedom of mobility when she got a new wheelchair.

The raccoon, named Vittles, couldn’t balance or support herself after receiving the injury, the source of which is unknown, according to a news release issued Monday by Walkin’ Pets, the company that made the wheelchair.

Wildlife rehabilitation specialist Susan Curtis first met Vittles when the raccoon was 8 weeks old, the business said. Curtis, who specializes in supporting the state’s bats and raccoons, contacted Walkin’ Pets after learning of work they did to provide wheelchairs for ducks, said Jennifer Pratt, a project manager for the company.

Walkin’ Pets got Vittles’ measurements and began work. Since the baby raccoon was going to grow, she would need a wheelchair that would “grow with her for awhile,” Pratt said.

According to the company, Vittles and Curtis can use the wheelchair to practice sharpening the animal’s balance and stability so she can walk on her own.

“Although unlikely that Vittles will ever make a full recovery, due to early intervention and the help of her brand-new wheelchair there’s hope,” the release states.

Walkin’ Pets develops wheelchairs for animals, typically house pets that struggle with mobility, according to its website. Vittles was the first raccoon to be outfitted with a wheelchair, the release states.

Since then, though, Pratt said the company has heard from other rehabilitators working with raccoons that have similar mobility issues.

“This is exciting, that we get to help others,” she said.