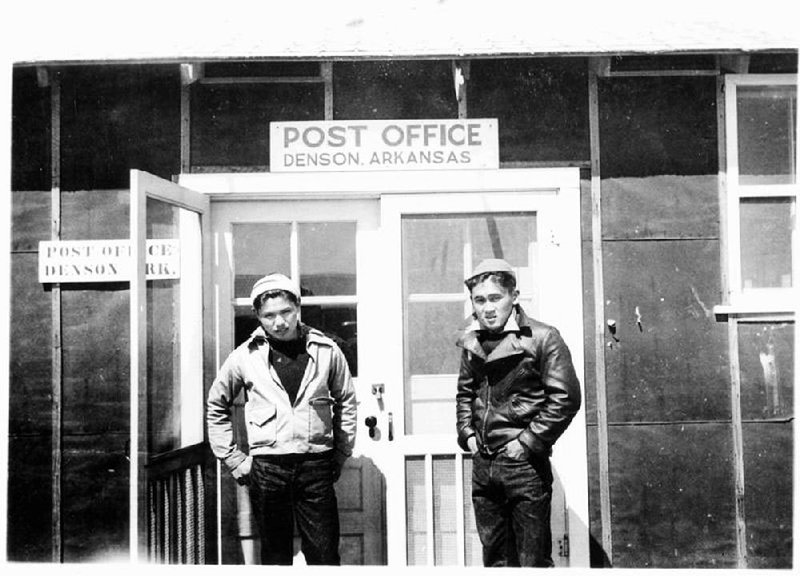 Fred Shimasaki (left) and Kiyo Renze are pictured at the Post Office in 1942. Shimasaki and his family were taken from California to the Japanese internment camps at Jerome and Rohwer during World War II. He is returning to Arkansas with a group from California on a pilgrimage to the camps and to mark the fifth anniversary of the Japanese American Internment Museum in McGehee.

Two Japanese American confinement sites in Arkansas will receive a total of nearly $270,000 from the National Park Service to support efforts to preserve and educate others about what happened there during World War II, officials said on Monday.

The gift, totaling $269,202, will go to Arkansas’ sites in Chicot, Drew and Desha counties for an ongoing project called “Rising Above in Arkansas: Japanese American Incarceration at Rohwer and Jerome,” according to a news release by the National Park Service. The funds are part of $2.8 million in Japanese American Confinement site grants given to locations across the U.S., the release states.

The goal of Rising Above is to make these centers come alive through an “immersive digital environment” that unites material culture, oral history, photos and documents, “bringing them together to create a sense of a lived place,” according to the project’s website.

The website includes a digital archive of related objects and historical documents, an interactive timeline that places Rohwer in context with World War II, interactive maps and a 3D visual reconstruction of one of the barracks.

The National Park Service said the Arkansas program, as well as other JACS-funded projects across the country, “help tell the story of the more than 120,000 Japanese Americans, two-thirds of whom were U.S. citizens, imprisoned by the U.S. government following the attack on Pearl Harbor in 1941.”

The grant program intends to educate future generations on “the injustice of the World War II confinement of Japanese Americans,” and to promote “equal justice under the law.”

"As America’s storytellers, the National Park Service is committed to preserving the stories of our shared history," National Park Service Deputy Director P. Daniel Smith said in the release. "These projects help ensure future generations of Americans learn from the struggles and perseverance of Japanese Americans incarcerated during World War II."