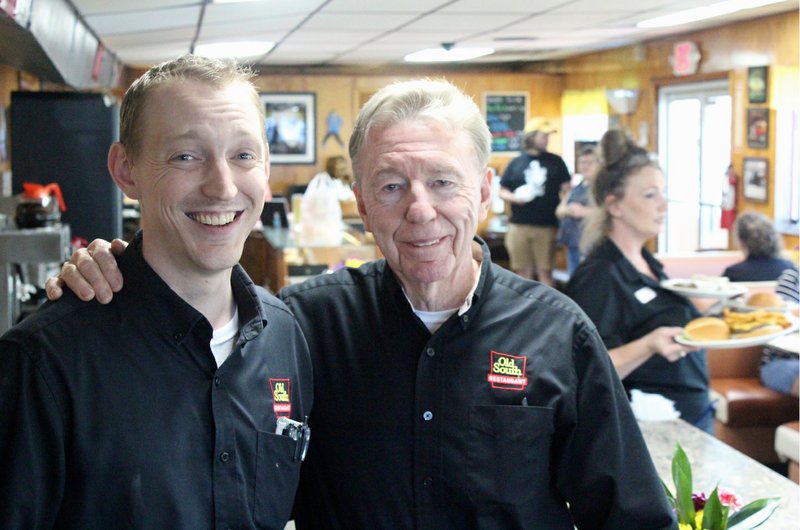 RUSSELLVILLE — The first time I called Old South trying to set up an interview with Dale Summitt, the diner's current owner and patriarch, I had a little trouble. A lady by the name of Velta answered the phone. I told her I was a freelance journalist working for the Arkansas Democrat-Gazette, and I was looking to do a story about the restaurant. She was not impressed.

She asked me if I knew what day it was. I did. It was a Friday.

She asked if I knew the time. "Almost 6," I said, and Velta laughed on the other end of the line.

"Friday at 6 o'clock, Hon, things get a little busy around here. Ain't no way you're talking to Dale."

I did, eventually, get to talk to Summitt and his son, Zachary, at their family diner in the heart of Russellville.

My wife and I both grew up in the city, so I'd been inside the restaurant. I'd read the "History" section on the laminated menu, a condensed record of the Old South's 72-year existence. How it was a hub for weary travelers in the early days, a stopping point along U.S. 64, before Interstate 40 became the fastest route between Oklahoma and Tennessee. I knew the place had a retro feel that hadn't been re-created — it was old.

The diner boasts the same streamlined design and fixtures as when it was erected by the National Glass and Manufacturing Co. of Fort Smith in 1947 — in six days, using prefab sections — for Russellville businessman Woody Mays, to serve his motel. Another diner was built from the same Old South kit at Fort Smith, but it was demolished in the 1970s. In 1999, Russellville's Old South was listed on the National Register of Historic Places as a classic example of an Art-Moderne diner. 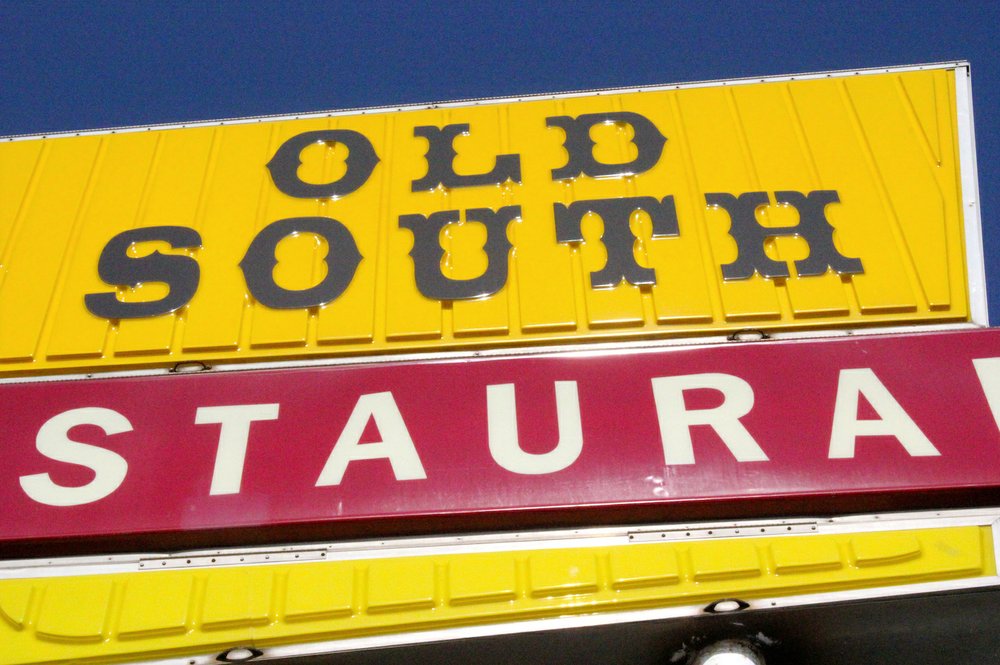 I'd seen the billboard coming into town, the one that read, "Two Presidents and a King."

The next week, I gathered up my camera, my yellow legal pad, a pen, and I took a trip back in time to the Old South. I didn't know what I was looking for. I didn't have any preconceptions about the "story." I just knew I liked the place. I liked that billboard with the catchy slogan. I liked the Old South's style.

Turns out, there was more to it than what I'd read on the menu, so much more than famous patrons and an old-timey feel. As I sat down with Dale and Zach, I got the idea that something special was going on in this place with the famous garlic-flavored salad dressing and Mickey Mouse Pancakes (my daughter's favorite). It is 2019, after all, and everything independent is supposedly dying. Mega corporations such as Amazon and Walmart rule the world.

When faced with the changing times — new liquor licenses popping up across the long dry Pope County and floating a bevy of new restaurants in the Arkansas River Valley — how does an alcohol-free, Mom-and-Pop diner like the Old South not only endure but also thrive? It was the first question I asked, and to my surprise, Dale Summitt had a concise answer. Four simple rules he has been following throughout his decades-long food service career.

Dale Summitt wouldn't tell me his age, but he's in his evening years. His son just turned 30. Together they run a very busy restaurant from 6 a.m. to 9 p.m. six days a week. It's a rare occasion to drive by the Old South and not see a slew of cars parked at odd angles, overflowing into the parking lot of The Atomic Squid, the head shop next door.

"Our goal is to be the best restaurant in Arkansas," says Dale, serious in his button-down black shirt, the same style Zach wears, "Old South" stamped in yellow across both of their breast pockets. They carry themselves in a similar manner as well, confident without coming off cocky, speaking in soft, self-assured tones, voices that make you lean in to listen.

The Summitts worked their way up through the business, first acquiring a rundown diner just outside Hot Springs Village called the Home Plate Cafe years ago when Zach was a child.

As his father relays their history, Zach smiles. He adds, "Work was my playground, but really, the coolest thing was getting to be around Dad all the time. I try not to take that for granted. A lot of people don't get to do that, and I did. I still do."

Dale eyes his son. "That goes both ways. More so from my end, though." 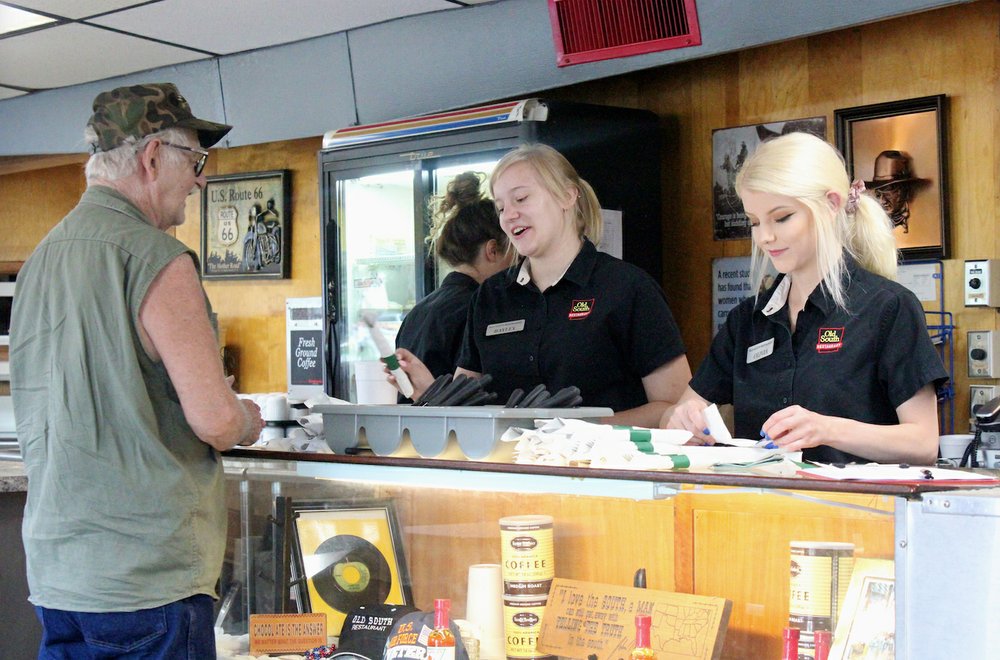 I was still curious about Dale's four rules. I prodded the business owner about the first one, trying to get him to define what "good food" really meant. He turned the conversation toward his lead cook, Jerry Ware.

A former restaurant owner and high school football referee, Ware was born in Oklahoma. He came to the Old South in spring 2014, about the same time the Summitts bought the restaurant. Ware's "good food" philosophy focuses on details.

"We still hand-cut all of our steak," Ware says. "We don't buy anything prepackaged. We cut our chicken, grind the meat. A lot of little bitty things, stuff that if you look in the corporate setting, you don't see."

Good food was just the beginning of the Old South's secret sauce, though. Dale's next rule was even more important.

I'd already experienced talking to Velta while trying to set up the interview. Little did I know, I'd be talking to her again.

There's not much that goes on inside the walls of the Old South that Velta, a five-year veteran and manager of the diner's 48 employees, doesn't know about.

"I deal with the girls and any kind of customer problems," she says. "Any stuff I can take care of so the Summitts don't have to deal with it, that's what I do. I try to just help them."

Velta wouldn't tell me her age — or her last name, at first, because she is Velta. Period. But she had no problem talking about her work. For Velta Nolan, providing "great service" at Old South is pretty simple: Give the people what they want.

"We're not just robots dealing with customers. We're having fun, you know?" Velta says. "You come in here out of everywhere else you could've went, but you chose here, so we want to make sure you're happy when you leave."

When I asked what made the Old South different, she did not hesitate to point to her bosses. "The owners, now, let me tell you. They are here from the morning until the end. It's ridiculous how many hours they put in. A hundred a week, maybe more."

The Summitts were not only talking the talk but also walking the walk. Which leads me to Dale's third rule.

Walking through the Old South's doors is like going back in time. There's a shaky-legged Elvis clock hanging on the front wall. A long coffee bar and a glass case stuffed with homemade chocolate-and-cream-cheese possum pies. Faded photographs of local stock-car racers — "Elmo Floyd" and a few other, unnamed drivers — outline the all-glass windows. It's not fancy by any stretch of the imagination, but it's clean.

"A lot of the stuff has dropped off the walls. We haven't redecorated," Dale says, and Zach laughs, adding, "Yeah, Dad and I aren't the best at that."

Fancy decor isn't necessary for success, at least not in Dale Summitt's book. According to Velta, the Old South has all you really need. "We ain't got a TV," she says. "We ain't got all that stuff. People got their phones. That should be enough." 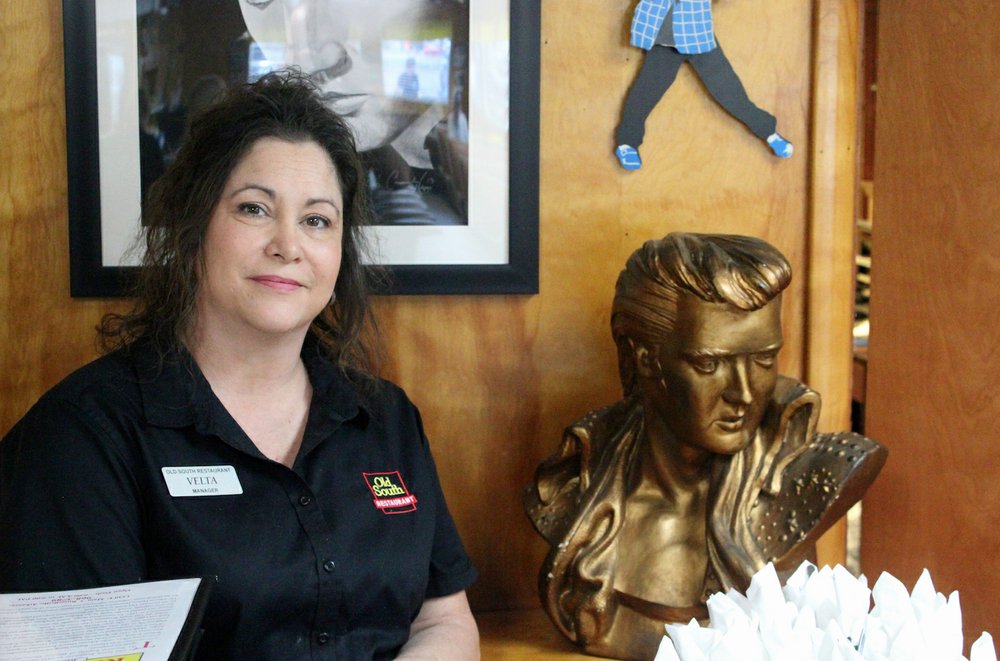 Elvis is an icon at the Old South, but Velta Nolan is the manager. (Special to the Democrat-Gazette/ELI CRANOR)

The lack of televisions doesn't seem to bother the good folk of Russellville one bit. In fact, it might even be part of the diner's appeal. But Dale's final rule is what really sets the Old South apart because everybody loves a bargain.

"Our menu is not where it could be, as far as pricing goes," Dale says. "We know that we're underpriced."

You can get the Breakfast Special — two eggs (any style) served with your choice of ham, bacon, sausage or Petit Jean bologna, choice of toast, English muffin or biscuits and gravy, and hash browns — for $5.99.

Dale keeps talking as Zach looks on, both playing off each other as they discuss the finer points of menu pricing. It's obvious these guys are passionate about restaurant work, and I want to know why. What makes a man like Dale Summitt — especially at his age, whatever it is — work so hard?

"Sometimes I think, well, it's about the money," he says, as serious now as he has been all afternoon. "But we close on Sundays. We close on holidays. If it was all about the money then we wouldn't do that. We'd be charging people for Thanksgiving, instead of doing what we do" — serve a free Thanksgiving meal to people in need. 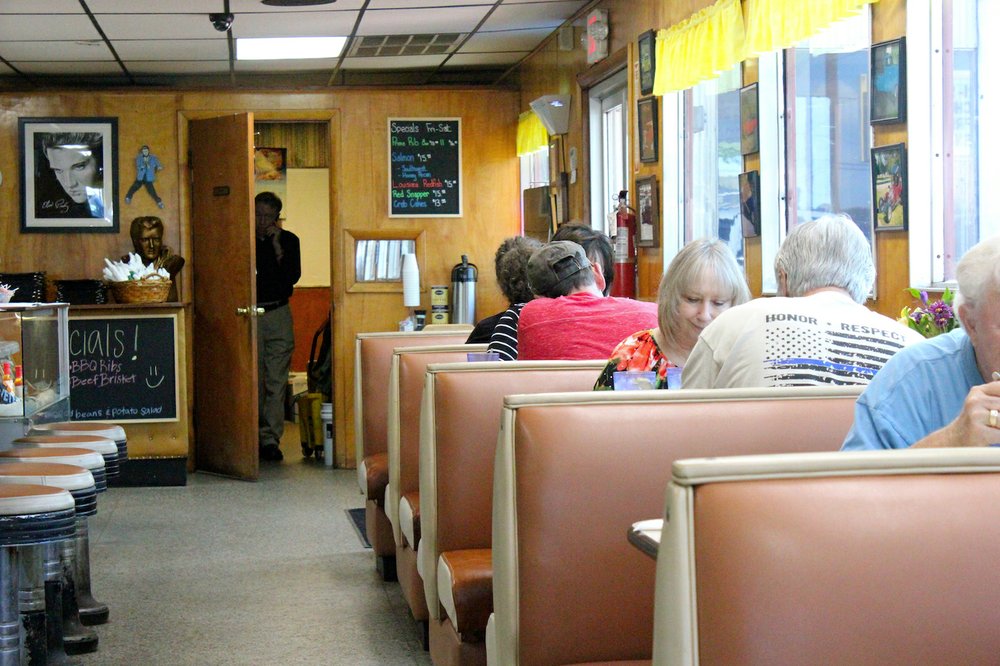 Dale Summitt surveys an afternoon crowd at the diner from the door of his office while talking on the phone. (Special to the Democrat-Gazette/ELI CRANOR)

It's almost time for the early-evening supper rush, and there's only one question left I can think to ask. I want to know about that slogan: "Two Presidents and a King." Who came up with it? I bring up the billboard, and Zach turns to his father. Right then I know the old man dreamed up that catchy line.

Like a veteran poker player, Dale keeps his cards close: "We still get phone calls off the highway, people calling in and asking, 'Hey, who were those two presidents?'"

Dale pauses and stands, surveying his diner: the waitresses bustling between tables, the cooks sweating in the kitchen as the customers start pouring in. "Bill Clinton and Jimmy Carter," he says, finally, grinning just a little. "Everybody knows who the King is."

Print Headline: This classic Arkansas diner keeps ’em coming back for more — even after 72 years