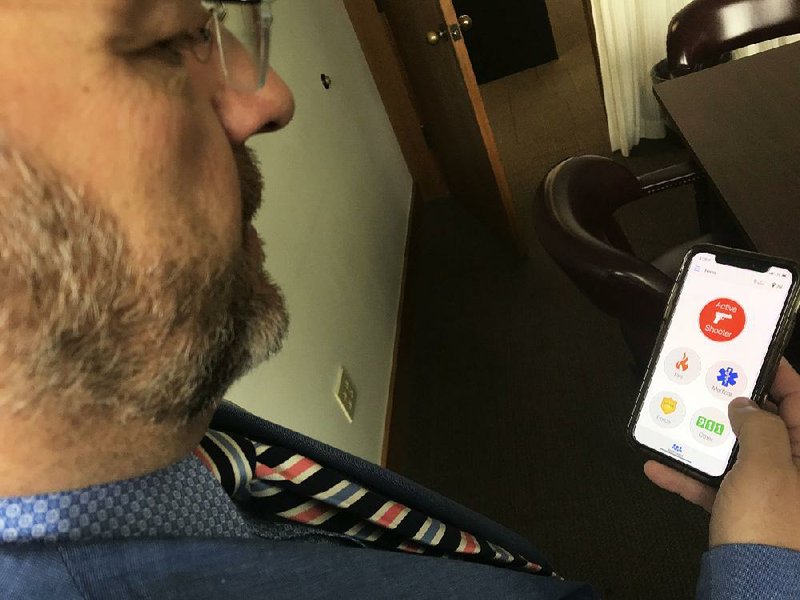 Doug Bradberry, Arkansas’ school safety coordinator, demonstrates the functionality of the Rave Panic Button mobile app in use in all 239 school districts in the state. Arkansas was the first state to adopt the mobile app in 2015.

Classes will begin Tuesday for most of Arkansas' estimated 480,000 kindergarten-through-12th-grade students as they fan out across 1,286 campuses in 238 school districts.

Over the course of the 2019-20 school year, millions of dollars will be spent educating those students, transporting them, feeding them and keeping them safe.

Keeping them safe, said Doug Bradberry, school safety coordinator with the Arkansas Division of Elementary and Secondary Education, involves the coordinated efforts of the state, educators, law enforcement agencies and technology. A big part of that technology is a mobile app from Rave Mobile Safety, an online "panic button" that allows school personnel to quickly summon fire, police or medical help, or to alert authorities to an active-shooter situation.

Bradberry said the Rave Panic Button app is in use in the Division of Elementary and Secondary Education as well as on campuses, and it has worked well in practical use.

"We've used it here for medical emergencies. It works," he said. "We had someone fall on the steps and when they pushed it, the ambulance was here within minutes."

Deploying it for the first time in 2015, Arkansas was the first state to to utilize the Rave Panic Button app statewide, said J.P. French, director of Strategic Accounts for Framingham, Mass.-based Rave Mobile Safety.

"I wanted to make sure there wasn't a gap in making that tool available to our schools," Hutchinson said recently. "So it will be available this next year and then we're going to do [a request for proposal] to make sure that other vendors have an opportunity to bid on this and be qualified so that schools can have options as to what kind of emergency response system they want to have."

According to French, the backbone of the app is an interface that works on any iPhone or Android smartphone and allows users to select from five emergency alerts that go directly to the local 911 center. Those alerts are: fire, police, medical, other 911, and active shooter. The app provides 911 dispatchers with detailed information regarding a caller's location through a technology called geofencing.

Geofencing is the use of GPS or radio-frequency identification technology to create a virtual geographic boundary, enabling software to trigger a response when a mobile device enters or leaves a particular area or, in the case of the Rave Panic Button app, to pinpoint a caller's exact location through a virtual map of the campus.

"When there is an incident on campus and [the authorized user] activates one of the five panic buttons," French said, "it immediately sends a text, email, and an in-app notification providing situational awareness to all the other staff members on campus. It then provides a direct dial into the 911 dispatch center."

When coupled with Smart911 technology at the call center, French said, the app provides the school's 911 profile, which contains floor plans, contact information and pre-loaded text messages that can be sent back to the staff members to keep everyone apprised of developments in the situation. It also sounds an alert to notify the dispatcher that the call is arriving from a panic button app.

Alan Stauffacher, superintendent of the Heber Springs School District, said the mobile app has been an important tool that adds an additional layer of security to his district of about 1,740 kindergarten-through-12th-grade students.

"It's added another dimension," Stauffacher said. "It's kind of like anything in regard to school safety. You have to have several things in place. This has helped with communication with local emergency networks as far as helping us improve communications and in knowing the locations where incidents may be taking place."

He said the app has been used on a few occasions, mainly as a precaution, and has worked well on those occasions.

"We really haven't had any major events associated with it," Stauffacher said.

Prairie Grove School District Superintendent Reba Holmes said the panic button app has been a literal lifesaver in her district of about 1,900 students, summoning help when a special-needs student suffered a seizure and stopped breathing.

"Our teacher immediately pressed the Rave button, started giving CPR, and she saved that child's life," Holmes said. "She was able to get help so much faster than with 911 alone.

"I don't ever want to be without it."

Holmes said teachers in the district have been trained to use the app if they have any suspicion of problems, regardless of the nature.

"We want our teachers to use it if they even smell smoke," she said. "We don't want them to be afraid to use it."

The Arkansas deployment of Rave Panic Button was mandated by the 2015 School Safety Act. Since that time, the Rave Panic Button app has been used statewide in Oklahoma and Delaware, French said, and is in use in some schools in Michigan; Washington, D.C.; and in the Rankin County, Miss., School District, near the capital city of Jackson. Rave also has developed a similar app for higher-education institutions called the Rave Guardian.

Steffie Corcoran, spokesman for the Oklahoma Department of Education, said the Rave Panic Button app was in use in the Norman School District and that, based on reviews during its use there, the decision was made to add $3 million to the state's education budget to expand use of the app to the state's 542 school districts for the coming school year.

"Some legislators and others there had a chance to see how it worked, and they were impressed," Corcoran said. "So they wanted to give the rest of the school districts in the state the option to use it."