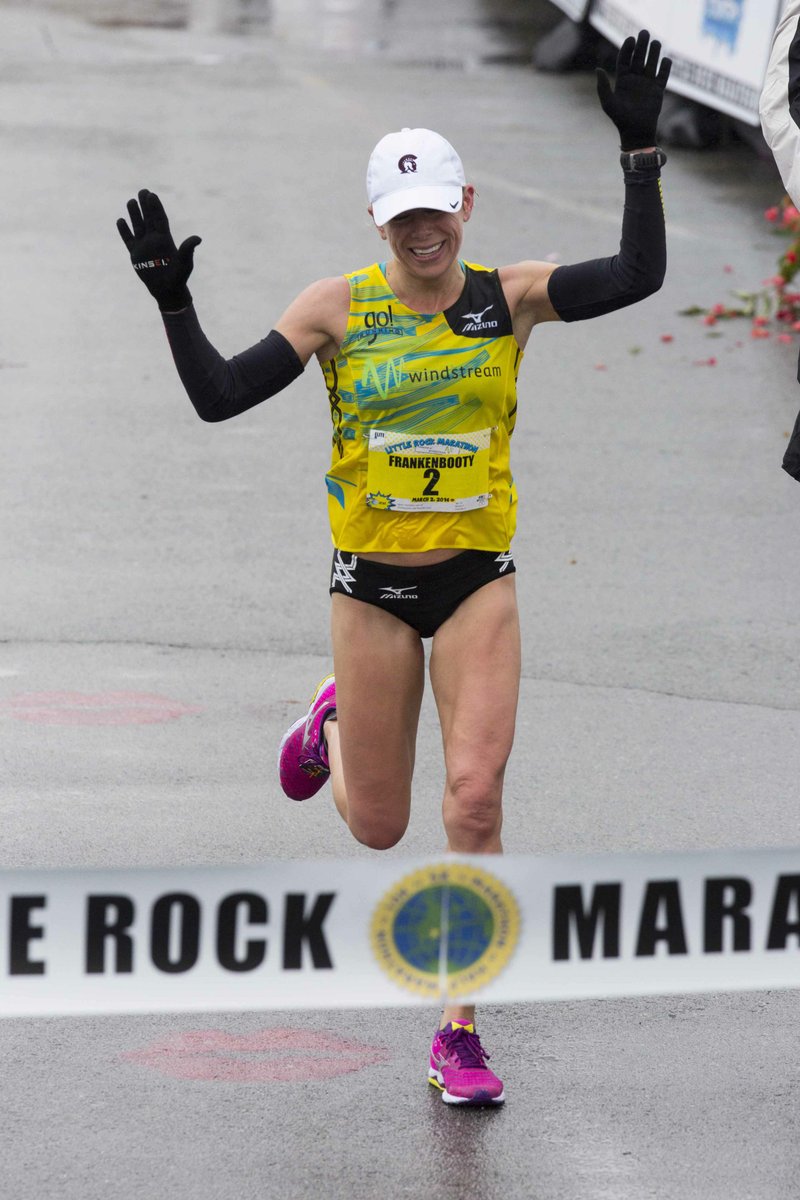 Leah Thorvilson crosses the finish line as the winner of the women's 2014 Little Rock Marathon March 2, 2014. The champion runner and Little Rock resident is also a stellar cyclist who recently appeared on the King of the Ride podcast with Ted King. (Photo by Melissa Sue Gerrits with the Democrat-Gazette)

"I feel like it's hard for me to stay in any one place really long. Like, if I'm in Little Rock for a few months, it's time to take a trip," Thorvilson said in a recent episode of King of the Ride, a podcast hosted by Ted King, former World Tour professional cyclist who retired in 2015 only to get sucked into the gravel-racing scene.

Thorvilson wasn't saying she can't stand to stay in Little Rock for long periods. She's just a traveler. She told King, though, that she is glad to be in Boulder, Colo., this summer, and missing the brutal heat and humidity in Arkansas.

Among the highlights of the 90-minute podcast — King's longest interview to date, he said — is a story of how she got into running.

"My earliest memory of running was my dad coming into the room and saying he was going to run a 5K." She said her dad asked if she'd like to join him and she, without any training or history of running, said yes.

"I did beat my dad that day," she said, and she was a natural runner. She remembers being 14 at the time but said her dad showed her paperwork that said she was 16. Either way, she never considered she'd make a career out of running, let alone cycling. She thought she'd end up on a dance team of some sort.

The Thorvilson episode is No. 39 if you want to listen.

If you're into podcasting to make money in hopes that you can quit your day job, The Podcast Business Journal online (podcastbusinessjournal.com) reported Friday that Glow.fm has gone live. It's a cool new service for podcasters that sounds too good to be true. Basically, it's a website whereby podcasters can easily collect money from listeners who in return get to listen to the pod commercial-free and on the listening app they normally use. Sign up and Glow.fm creates a custom page to advertise your show. You can post links to the page in your episode notes, on social media or just about anywhere you can stick a URL.

Listeners can sign up for recurring subscriptions or just make a one-time payment of, say, $5. I'll be curious to see how popular the setup works for podcasters. Will reviews be Glow-ing?

Another service for podcasters that sounds too good to be true is from PodcastOne, which bills itself as "the leading advertiser-supported, on-demand digital audio network. With a 360-degree solution, including content creation, brand integration and distribution, PodcastOne sees more than 2.1 billion downloads annually, across 350 episodes produced weekly."

Launchpaddm.com promises podcasters a totally free hosting experience. According to the website: "It's an awesome way for PodcastOne to find the next wave of great podcast talent — which could be you! In order to keep this service completely free to you, we have the right to sell up to 2 minutes of digitally inserted ads in the pre-roll and mid-roll breaks, and retain the revenue." That appears to be the only catch, and the website goes on to say that 'casters can make money from their own ads as well.

This week's podcast suggestions come from state Rep. Jana Della Rosa, R-Rogers, whom I called because she turns up in one of the first episodes of Season 2 of Hell and Gone, the podcast featured Aug. 6 in this space. Investigator and host Catherine Townsend, who's in Northwest Arkansas doing the new episodes and releasing them each Wednesday, talked to Della Rosa about the first season, which also featured an Arkansas victim, Rebekah Gould of Melbourne.

Della Rosa said her sister told her about the first season and that in it someone mentioned "Rebekah's law," which the representative had never heard of. Neither had her colleagues in the Legislature.

"I even checked the bills that had been filed that session, and I couldn't find anything."

Next, she turned to Larry Gould, Rebekah's father, who told her he is, in fact, working on a bill that would give investigators earlier access to evidence in cold cases. "He's still wanting to work on it, but it's going to be a tough piece of legislation," Della Rosa said. Still, she plans to help Gould next session, as there was no time to take it up this past session.

Anyway, Della Rosa admits to being a big fan of true-crime podcasts and said she got hooked on them during her 3 ½ hour drives between Little Rock and home. She has binged on Dirty John, both seasons of Serial and one from Australia, The Teacher's Pet, which I have put on my listening list. But lately, she's brushing up on history.

Della Rosa said she has listened to hours and hours of Dan Carlin's Hardcore History, learning more about World War I than she ever had in school. "I listened to three podcasts, each about three or four hours long, just on World War I!"

She became almost giddy describing one of the episodes titled "The Destroyer of Worlds," all about the nuclear bomb. "Think about that! One person in the world gets vested with the power to destroy the world. It is scary!"

One last suggestion from the legislator: Crimetown Presents: The RFK Tapes.

Unless you have your own private plane, it's probably too late for you to attend the huge meeting of podcasters and the businesses that serve them being held in Orlando, Fla., today through Friday.

You can look forward to next year's, which we will be Aug. 5-8 at a location that hasn't been announced yet. Podcast Movement, billed as the world's largest gathering of podcasters, brings thousands of folks to Orlando. According to Podcastmovement.com, there will be more than 300 speakers and panelists and more than 150 sessions from which to choose. The conference is meant for active and aspiring podcasters, who can rub shoulders with the best in the business. Exhibitors include some of the biggest players in the rapidly expanding medium. It's kind of pricey for the Average Joe, but now that you know about it you can save up for next year's.

Here's a look at some other conferences coming up this year.

• Mid-Atlantic Podcast Conference, Sept. 6-7, Atlantic City, N.J. Podcasters and fans in the Mid-Atlantic states (North Carolina, Virginia, Delaware, Pennsylvania, New Jersey, New York, Maryland and Connecticut) got together in a Facebook group in 2014 and that group eventually grew into this conference. Check it out at Podcastmidatlantic.com.

• Closer to home, the 2019 Radio Show, Sept. 24-26, Dallas. This one is really all radio broadcasting but with at least two sessions on podcasting. On the morning of Sept. 25, there will be a session on "Earning Listeners and Advertising Via Local Podcasts" moderated by Podcast Movement President Dan Franks with radio program director Marisa Magnatta.

Later that day, the general session is titled "The Podcast Revolution," featuring Carter Brokaw, president of digital revenue strategy for iHeartRadio, a heavy-hitter in the podcast universe. Hell and Gone, the podcast currently investigating the mysterious death of Janie Ward in Marshall, Ark., in 1989, is a production of iHeartRadio. Visit Radioshowweb.com for registration and ticket information.

• She Podcasts Live, Oct. 11-13, Atlanta. She Podcasts was also born on Facebook, then moved to Kickstarter to finance its first conference, and this is it. All the panelists will be women, and sessions are directed at women. Check out Shepodcasts.live.

• Werk It, Oct. 3-4, 2019, Los Angeles. Women in podcasting are again the focus of this gathering, with two days of networking and workshops. Visit Werkitfestival.com.

• Third Coast, Oct. 4-6, Chicago. Like the aforementioned Radio Show, Third Coast is geared only toward podcasting. It brings together all types of audio storytellers and students for two days of idea-sharing. Thirdcoastfestival.org.

• We Are Podcast, Nov. 7-9, Brisbane, Australia. This one will be a hard sell for your boss. Can you imagine the expense report? Since 2015, this conference deals more with the business end of podcasting and how to get a return on your investment in the medium. Wearepodcast.com.

CORRECTION: Catherine Townsend is the investigator and host of the podcast Hell and Gone and Hell and Gone 2. Her first name was spelled wrong in an earlier version of this story.