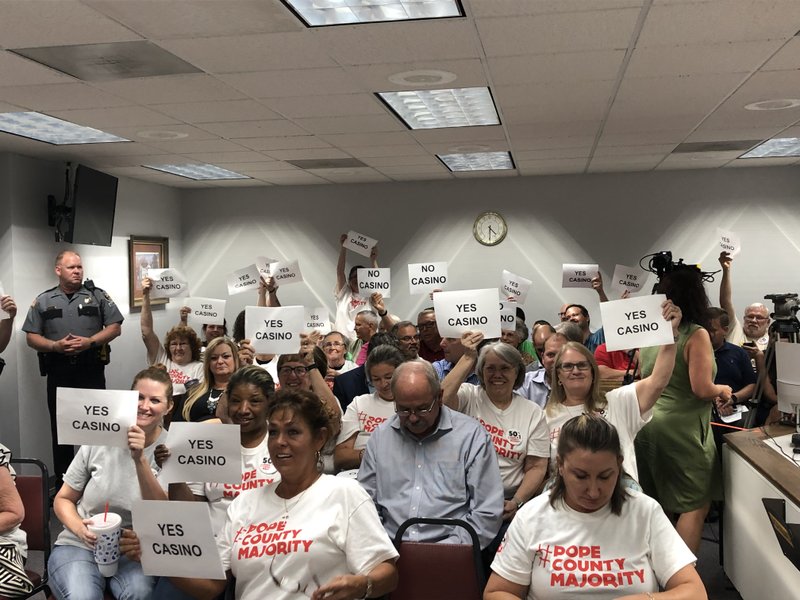 A full audience packs the meeting room where the Pope County Quorum Court holds a special meeting Tuesday evening to discuss granting a casino license. Many in the room are members of Pope County Majority, a group formed to advocate for building a casino there.

Amid allegations of secret meetings, the Pope County Quorum Court on Tuesday night endorsed a proposal by Cherokee Nation Businesses to place a casino and hotel complex just north of Interstate 40.

The Legends Resort and Casino beat four rivals in the race to have the endorsement of county officials. The decision was no surprise to observers, as two rivals said over the weekend they had been told who would win the endorsement.

Amendment 100, approved by voters in November 2018, allows a new casino each in Pope and Jefferson counties and allows the expansion of gambling at the racetracks in Hot Springs and West Memphis.

The amendment requires new casinos to have the backing of local officials, which looked unlikely in Pope County, where voters soundly rejected the amendment and also approved an initiated county ordinance that would require officials to seek voter approval before backing a proposal.

The county ordinance was not addressed in Tuesday night’s special meeting.

Allegations of secret meetings emerged Monday when citizens and a justice of the peace filed affidavits with the local prosecuting attorney saying some members of the Quorum Court met privately to discuss the casino issue. The prosecutor was asked to investigate whether these meetings violated the Arkansas Freedom of Information Act.

On Monday morning, the Cherokee Nation Businesses unveiled an updated proposal featuring renderings of a $225 million resort that would include 50,000 square feet of gambling with 1,200 slot machines and 32 table games as well as sports betting.

The resort also would feature a 200-room luxury hotel, a 15,000-square-foot meeting and conference center, a resort pool, an outdoor music venue, a recreational vehicle and dog park, and an outdoor water park.

The project would be completed in one phase within 18 months and would create about 1,000 direct jobs, according to the statement.