Airport occupiers face off with police in Hong Kong 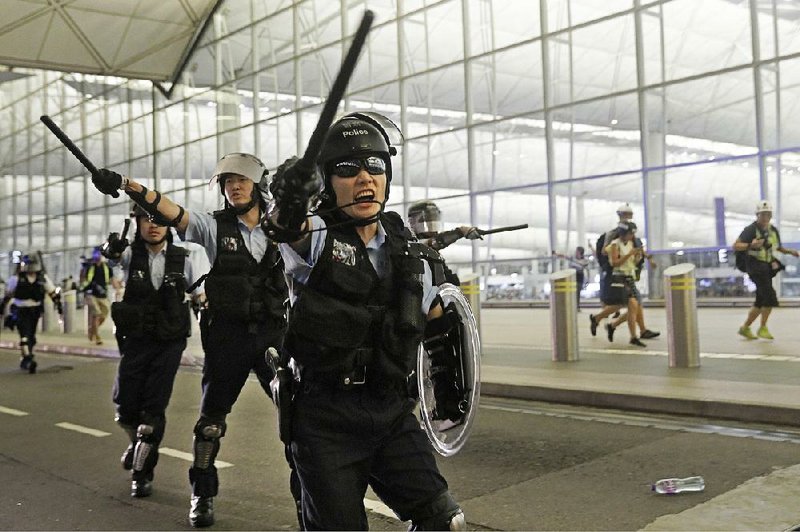 The police, armed with batons and pepper spray, intervened after a frenzied mob of protesters seized a man, claiming he was an undercover Chinese police officer, and blocked paramedics from transporting him for hours after he lost consciousness. Later Tuesday, the group seized a second Chinese man, identified by his documents and his editor as a reporter for the Global Times, the Chinese Communist Party-run newspaper. Flight operations resumed early today.

Weighing in on the developments, President Donald Trump tweeted: "Our Intelligence has informed us that the Chinese Government is moving troops to the Border with Hong Kong. Everyone should be calm and safe!" He did not elaborate.

The incidents marked a brazen escalation by protesters in confronting those they perceive as infiltrators from mainland China and capped a second-consecutive day of chaos at Hong Kong's airport, among the busiest in the world. Authorities have been unable to quell months of dissent in the financial hub.

[Video not showing up above? Click here to watch » https://www.youtube.com/watch?v=uY6m3390CEo]

After mass cancellations Monday evening, flights gradually had been returning to normal throughout Tuesday, even as thousands of black-dressed demonstrators returned to occupy parts of the airport, carrying placards denouncing police brutality and calling for freedom for Hong Kong.

But by late afternoon, with protesters using luggage carts as makeshift barricades and blocking passengers from reaching the departure gates, causing long lines, authorities said they were suspending check-in at both airport terminals.

Arguments broke out between frustrated passengers and protesters, with some stranded travelers crying and saying they just wanted to get home.

Later in the day, protesters surrounded a man they believed to be an undercover police officer from Shenzhen, the Chinese city across the border from Hong Kong. There was no confirmation of the man's identity or profession, but the protesters cable-tied his hands and did not let him move or leave for hours.

Those closest to the melee held their phones aloft and tried to film the struggling man, while some jeered and laughed at him. Protesters held a handmade sign over the man that read in English, "I am China's police. I pretend to be protester," as he appeared to struggle to remain conscious.

Police entered the airport to help the man, whom paramedics tried to remove on a stretcher. The presence of officers sparked chaos, as protesters spilled out of the airport and began attacking police vans with officers inside.

At one point, an officer was overwhelmed and his baton taken by protesters, who beat him with it. The group retreated only after the officer appeared to pull his gun from its holster.

After the standoff with police, a second man was apprehended by protesters and bound to a luggage cart with cable ties. Protesters removed his passport, bank cards and other personal documents and scattered them on the floor. The documents identified him as a reporter at the Global Times.

Hu Xijin, the newspaper's editor in chief, confirmed on Twitter that the second man seized by protesters was a reporter for the Chinese state outlet.

"Fu Guohao, reporter of GT website, is being seized by demonstrators at HK airport," Hu said. "I affirm this man being tied in this video is the reporter himself. He has no other task except for reporting. I sincerely ask the demonstrators to release him. I also ask for help of West reporters."

Trump on Tuesday described the developments in Hong Kong as a "very tough situation."

The U.S. State Department urged China to adhere to its commitment to allow "a high degree of autonomy" in Hong Kong -- part of an agreement under which Britain relinquished its former colony.

Statements from Chinese government officials and state media outlets have grown steadily more shrill before Tuesday, accusing protesters of "terrorism" and warning of an impending crackdown in the semiautonomous financial center.

The political crisis, triggered by now-suspended plans to allow extraditions to mainland China, has swollen as Hong Kong residents demand the bill's full withdrawal, an independent inquiry into police actions toward protesters, greater democracy and amnesty for those arrested in clashes between demonstrators and police.

Carrie Lam, Hong Kong's leader, said the city risked being "pushed into an abyss" and warned that it could be "smashed to pieces."

"The stability and well-being of 7 million people are in jeopardy," Lam said.

Hong Kong-based airline Cathay Pacific, which has drawn the ire of Beijing after some of its employees recently joined protests, said Tuesday that a second pilot from the airline has been suspended. The pilot, a second officer working on a flight Tuesday from Manchester, England, to Hong Kong, was suspended for "misuse of company information in violation of the company's internal code of conduct," the company said in a statement. It added that internal disciplinary proceedings were underway.

On Saturday, Hong Kong's flagship airline said it had suspended a pilot who was arrested during earlier protests.

International calls grew, meanwhile, for authorities in Hong Kong and China to dial back tensions in the city.

U.N. human-rights chief Michelle Bachelet urged authorities to immediately investigate police use of force in their recent crackdown on protesters. Her spokesman said there was "credible evidence" to suggest that Hong Kong law enforcement officials had used less-than-lethal force in ways that are "prohibited by international norms and standards."

Chris Patten, the last British governor of colonial Hong Kong before the city's return to Chinese sovereignty in 1997, warned that a Chinese intervention would be a "catastrophe" for Hong Kong and China.

Speaking to BBC radio, he urged Lam and Chinese President Xi Jinping to find a way to bring people together.

"There is a degree of frustration and anger at the government refusing to give any sensible ground at all, which probably provokes more violence," Patten said.

Christensen said it was up to China to say why it denied the requests.

Information for this article was contributed by Gerry Shih, Timothy McLaughlin, Anna Kam and Shibani Mahtani of The Washington Post; by Mike Ives, Ezra Cheung and Elsie Chen of The New York Times; and by Yanan Wang, Katie Tam, Vincent Thian, Kelvin Chan, Sylvia Hui and staff members of The Associated Press. 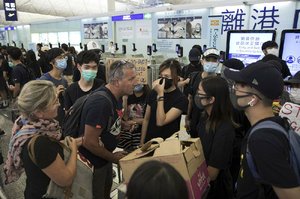 Photo by AP/VINCENT THIAN
Travelers argue with protesters Tuesday as they try to get through blocked departure gates at Hong Kong International Airport.