Council approves resolution after speakers give views by Laurinda Joenks | August 14, 2019 at 3:26 a.m. 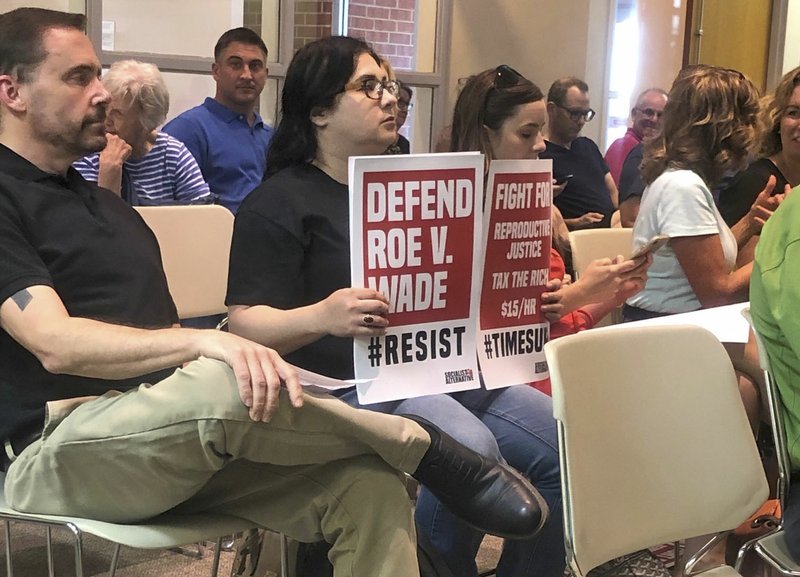 SPRINGDALE -- The Springdale City Council approved a resolution Tuesday night proclaiming the city an anti-abortion city in a 6-1 vote.

Council member Colby Fulfer took the resolution before the council during a committee meeting Aug. 5, with the committee voting unanimously to send it on for council approval. Fulfer said the city's measure sends a message to Planned Parenthood, "respectfully asking the abortion provider to find another city," he said.

Planned Parenthood stopped providing services July 25 at its location on North Crossover Road in Fayetteville, according to the local office's website. The group said it will announce a new location.

The council chambers and the lobby at the entrance filled as residents and other interested parties showed up.

Speakers supported both sides of the issue, with nine speaking in support of the resolution and nine against. Observers on both sides clapped when they agreed with a speaker's point and called out, "Lies! Lies!' when they did not.

Six more speakers addressed the council, not supporting one side or the other, but rather saying this decision was not one for the City Council to make.

The first speaker's name was lost by the noise and poor acoustics of the room. But she spoke of 22 years as a patient of Planned Parenthood. "They're probably the reason I have not had an abortion," she said.

"I'm sad the city doesn't feel like it was good care, that they're not welcome here," she said.

Kenny, a Marshallese man who did not give a last name, told the council that he was HIV-positive and no longer has access to medical care with the closing of the Planned Parenthood office in Fayetteville.

"You say you're pro-life; back it with action," he said.

Fulfer spoke before the residents Tuesday and said that an overwhelming majority of constituents in Springdale support life from the beginning to the end. "What's really pointed out in this resolution is that through hundreds of thousands of dollars we spend to support every stage in life."

He noted the school district's education of children, the opportunities the city's growing economy offers residents in the middle years of their lives and the support of the Springdale Senior Center, which offers economic and social opportunities for residents in later life.

In fact, the resolution is nothing more than a statement, said City Attorney Ernest Cate.

Cities have the authority to make statements by resolution, Cate continued. For example, the council approved a resolution encouraging the state Legislature to pass the Internet sales tax.

The resolution does not ban anyone from making a choice about their own personal health care, Fulfer continued, and Springdale provides a wide range of health care services.

He noted that those who support the organization will be able to access their care if Planned Parenthood chooses to remain in Fayetteville.

Keith Underhill urged the council to vote for the resolution. "It's who we are," he said.

Underhill described the Springdale community as having a small-town, friendly flavor, welcoming to all groups.

"It's where we greet each other when we meet on the street and stop for a conversation at the end of the driveway," he said.

"We've recently been named one of the top 10 places to live," he concluded.

John Mathias is a nurse. He noted that when Fulfer spoke about putting forth the ordinance, the council member spoke about it being personal to him.

"But it shouldn't be personal," Mathias said. "It's supposed to be about the separation of church and state. You are sending the wrong message to Northwest Arkansas."

Eddie Cantu shared the story of his family near the end of the meeting. His parents moved to the United States from Mexico in the 1950s. He has four older siblings.

Cantu said his mother's life was in danger in 1962, during her pregnancy with Eddie.

"She drank all kinds of things to cause an abortion and none of them worked," he said.

"It's not that she didn't want me. But if there had been a clinic, I might not be here today." 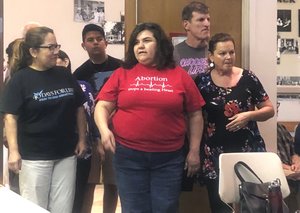 Photo by Laurinda Joenks
Residents share their sentiments on T-shirts during Tuesday night's Springdale City Council. The council members vote to adopt a resolution proclaiming the city to be pro-life.