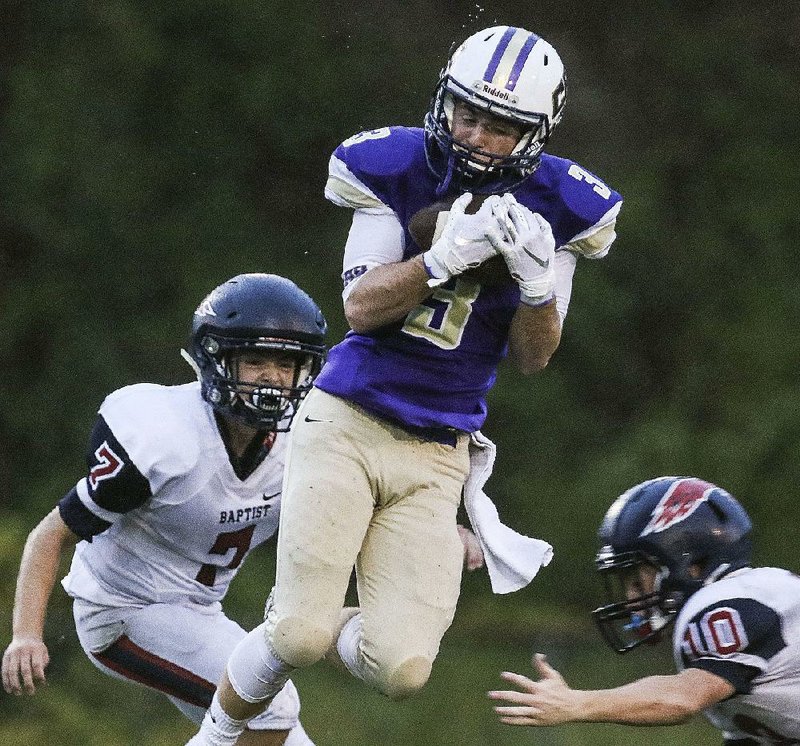 Junior Hayden Brent (left) returns at running back and defensive back for the Baptist Prep Eagles.

Among the biggest turnarounds in the state last season was Baptist Prep, which snapped a 22-game losing streak in the opener and finished 4-6-1 overall to make the playoffs for the first time since 2015.

The 180-degree turn coincided with promoting Zach Welchman, previously the school's defensive coordinator, to head coach and moving from 4A to 3A for the 2018-2020 classification cycle.

"It was very good for our kids' mentality," Welchman said of the classification drop. "Seeing that they could compete, that encouraged them to grow. Whereas before, I really think they were struggling with believing in themselves. Whenever you struggle with that, you tend to not grow. We've seen a lot of fruit this year."

The west Little Rock private school could be back in the postseason business this fall since 17 starters return. Depth, however, is an issue with only 23 players on the roster.

Welchman said the Eagles could be better offensively because they're running the same Spread scheme for the second consecutive season. Baptist Prep had been a ground-heavy Flexbone team under Welchman's predecessor, Morgan Cruce, who left after two seasons to coach running backs at Bethel University in Tennessee.

"We were not 90 percent run," Welchman said of 2018. "We were definitely more balanced than in the past. The kids have taken it well. The kids have really responded for two years in the same system. We've had a really good spring, really good summer and fall camp has been a breeze. We have pretty much everything installed offensively."

Eagles at a glance

"He will be fun to watch," Welchman said. "He will be electric. He's very quick."

"Beating Bismarck was very big for us," Welchman said. "You don't win that game, there's a lot of question marks in the boys' minds, I think. Being able to pull that game out in the last minute, last seconds, was huge for them."