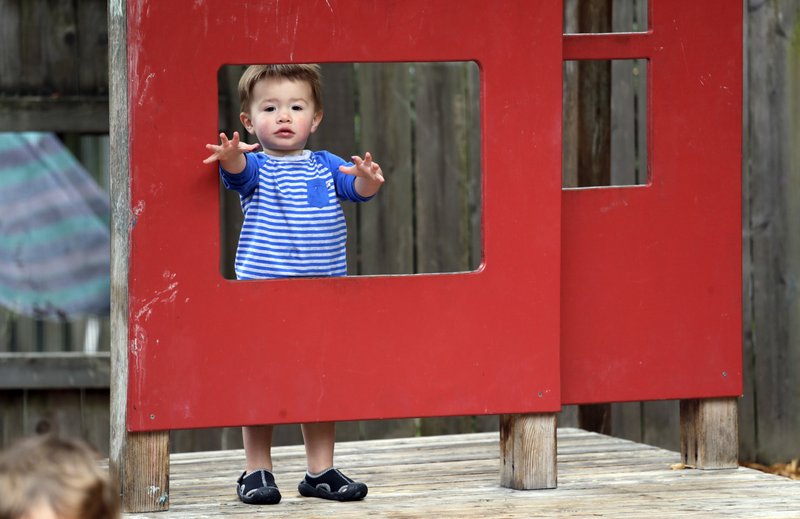 In this Aug. 27, 2018, Vincent Seeborn, 2, reaches out from a structure on the playground at the Wallingford Child Care Center in Seattle. Child care costs in most states exceed federal subsidy payments provided to low-income parents, according to a newly released report from the Department of Health and Human Services Office of Inspector General, leaving working families with few affordable options. (AP Photo/Elaine Thompson, File)

WASHINGTON -- Child care costs in most states exceed federal subsidy payments provided to low-income parents, according to a newly released report from the Department of Health and Human Services' Office of Inspector General, leaving working families with few affordable options.

The report, released Tuesday, focuses on the Child Care Development Fund, an $8.2 billion block grant that goes toward offsetting the cost of care for 1.4 million children nationwide. The fund is the primary federal funding source for child care assistance for eligible working parents.

The federal recommendation is that states provide payment rates at the 75th percentile, which allows eligible families to access 3 out of 4 providers without paying more out of pocket. But the report shows most states set their rates much lower.

States have discretion over the how to administer the program: They set their own income requirements and decide how much families are expected to contribute. The report cites several reasons that states may keep their rates low, including stretching limited resources to serve more families and taking into consideration the cost of higher-quality care. Nineteen states reported paying enrollment and registration fees for low-income families, and seven states said they pay for extra child care activities such as field trips.

The Administration for Children and Families, which oversees the block grant, relies on states to self-certify that they are setting rates that ensure low-income families have equal access to care. But the inspector general report shows most states aren't meeting the requirements.

Last year, under a bipartisan agreement, Congress approved a $2.4 billion increase to the fund. But advocates say money continues to be a problem.

"[The Child Care Development Fund] is severely underfunded, and as families across the country are struggling to afford care across all income levels, it's dire for low-income families," said Catherine White, director of child care and early learning at the National Women's Law Center.

"This shows how the administration is talking out of both sides of their mouth," White said. "They say they want to support children and families, but they're stripping families of basic assistance they need. It's another trend where they are both not following through on promises and needs of families, but working directly to undermine them."

The report recommends that the Administration for Children and Families should develop new methods for ensuring equal access for Child Care Development Fund families, establish a forum for states to share strategies, and encourage states to minimize administrative burdens to expand access for families.

In its response, the Administration for Children and Families said it has placed 33 states on a corrective action plan to ensure they're complying with equal access requirements and accurately collecting data. It also said it will provide states with training and guidance.