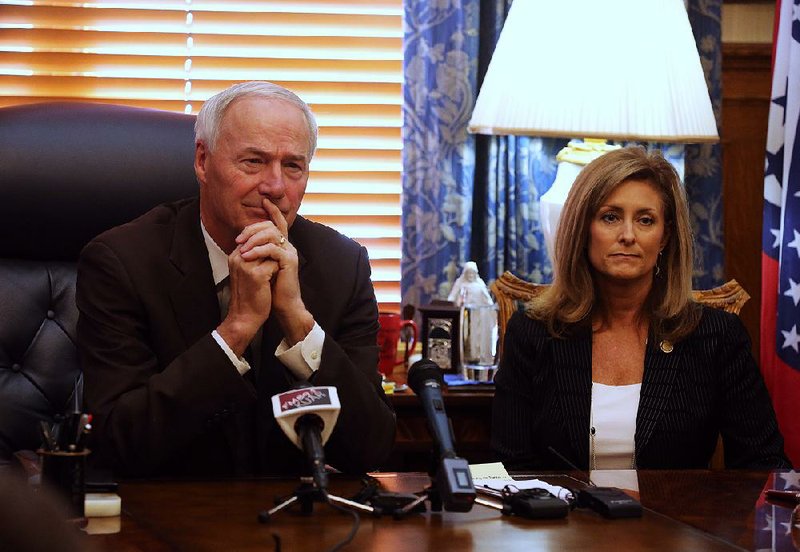 Arkansas Governor Asa Hutchinson (left) and Amy Fecher (right), secretary of state Department of Transformation and Shared Services, are shown in this file photo. “We are excited to have Dr. McGee serve as the state’s chief data officer in a collaborative effort with the University of Arkansas,” said Fecher after Joshua McGee was named as state’s new chief data officer.

The heads of two state agencies received larger salaries starting July 1 than the pay levels Gov. Asa Hutchinson's office announced they would receive when the governor revealed his picks to be secretaries of 15 Cabinet-level departments.

The governor's chief spokesman said these errors were corrected last week, after the Arkansas Democrat-Gazette asked about the discrepancies.

The Republican governor's reorganization reduced the number of agencies reporting to him from 42 to 15, effective July 1. July 1 also was the start of fiscal 2020 and when the higher salaries took effect.

The annual salary of Amy Fecher increased from $125,671 to $162,153 with her promotion. She went from a dual position -- executive vice president for operations at the Arkansas Economic Development Commission and chief transformation officer for the governor -- to secretary of the Department of Transformation and Shared Services, according to state records.

Fecher is one of 58 state employees -- beyond those who work at the state's colleges and universities -- who received pay raises of at least $10,000 in fiscal 2020, according to state records.

Hutchinson's office said May 22 that Fecher's salary would be increased to $155,916 a year.

The annual pay for Nate Todd increased from $122,954 to $134,640 when he went from director of the Department of Veterans Affairs to secretary of the reorganized agency, according to state records.

"The Governor directed that any merit pay be included in the final salaries of all secretaries, not in addition to," said his spokesman, J.R. Davis, in a written statement. "Due to human error, two Secretaries (Fecher and Todd) received merit pay in addition to their new salaries."

Asked who made the error, Davis said, "All I know is various people keying in everything in for July 1. No one [in] particular."

The state Office of Personnel Management "is correcting both salaries to what was originally approved. Funds will not be recouped from the mistake, but the salaries will be at the reduced level moving forward," he said.

The mistakes mean Fecher received $719.64 more in gross salary before taxes than originally planned and Todd received $304.63 more, said Alex Johnston, a spokeswoman for the Department of Transformation and Shared Services.

Fecher was placed into the system mid-June as a state Department of Finance and Administration employee since the Department of Transformation and Shared Services did not exist at that time.

She received a 4% merit pay raise, based on the finance department's merit pay scale, on top of her $155,916 salary, he said.

"The transparency website is in the process of correcting those figures, but it takes a few days," Davis said Wednesday.

The department will be a key part of the governor's reorganization, which he expects to save the state at least $15 million a year starting in fiscal 2021.

Some raises were granted because of promotions, taking on additional duties and the reorganization. Also, Republican Attorney General Leslie Rutledge continued her efforts to make her office's salaries more competitive, state records show.

Jami Cook received the largest pay raise of $57,017, from $98,899 to $155,916 a year as a result of her elevation from the director of the Commission on Law Enforcement Standards and Training to also serving as secretary of the new Department of Public Safety, according to state records.

The Department of Public Safety also includes the Division of the Arkansas State Police, Crime Information Center, State Crime Laboratory, Division of Emergency Management and Division of Law Enforcement Standards and Training. The highest-paid employee under Cook is the state police director, Col. Bill Bryant, whose salary also is $155,916, according to the transparency website.

Plant Board Director Scott Bray, whom Hutchinson promoted from assistant director, received the second-largest pay raise of $37,435, from $70,675 to $108,110, according to state records.

The Plant Board on June 11 nominated Bray to be its new director to succeed Butch Calhoun, who retired June 30, and the governor confirmed his nomination. Bray has worked at the agency for 26 years.

Fecher received the third-largest raise of $36,482 before her salary was reduced. Division of Information Systems Director Yessica Jones is the highest-paid employee under Fecher's department, with an annual salary of $158,209.

Paulette Renee Mallory picked up the fourth-largest pay increase from $99,560 to $134,406 with her promotion from director of the Center for Health Protection at the Arkansas Department of Health to deputy director of public-health programs. Mallory has worked at the department for 30 years, said agency spokeswoman Meg Mirivel.

Employees in Rutledge's office were fifth through eighth on the list for highest raises:

Asked about the raises for these four and another four who also received at least $10,000, Rutledge spokeswoman Amanda Priest said that "since taking office, Attorney General Rutledge has made it a priority to be a responsible steward of taxpayers' money, handling raises on a case-by-case basis depending on each employee's job performance.

"Four of the attorneys ... have decades of leadership experience in state government and one in particular has been with the Attorney General's Office for 28 years," Priest said in a written statement. Priest said she was referring to Cox, Benafield, Warford and Johnson; Johnson has worked for the office for 28 years.

"All pay raises were based on the individual's experience and the value they add to the State and this Office," she said.

"The Attorney General recognizes that her office must remain the top law firm in the State and attract the most talented lawyers, investigators and other professionals to defend the State in the courtroom and protect Arkansans from criminals and con artists," said Priest, whose salary increased by $10,000 to $75,000 a year.

The highest-paid non-higher education state employee is Human Services Secretary Cindy Gillespie, whose salary is $287,042 a year. She received a $4,242 pay increase.

The highest-paid state employee to get at least a $10,000 pay raise this fiscal year is Scott Bennett, director of the state Department of Transportation. His salary increased by $10,946 to $229,944, according to state records.

"In November 2014, Mr. Bennett's salary was set at the maximum-allowed in ArDOT's Commission and Legislature-approved budget," Schueck wrote in his memo to the chief fiscal officer and division head for human resources.

The largest raise at the University of Arkansas for Medical Sciences was nearly $400,000 for assistant professor Lawrence O'Malley, said UAMS spokeswoman Leslie Taylor. O'Malley's pay went from $480,070 to $874,035 a year.

The salaries and pay increases of surgeons such as O'Malley are based on productivity and hitting national benchmarks for productivity in their subspecialty. As a result, their salaries can fluctuate, she said.

She said the 25th through 75th percentile compares with national salary data by orthopaedic subspecialty, compiled by the Medical Group Management Association.

At the University of Arkansas, Fayetteville, the largest raise for an employee was received by Frances Jacobs, a distinguished professor of art history in the School of Art.

Jacobs previously was on a nine-month appointment and received a full-time, 12-month appointment with merit and equity increases in line with similar positions, adjusting her salary from $116,372 to $160,465, or an increase of $44,093, according to Rebecca Morrison, a UA spokeswoman.

The state employees who are eligible for performance-based raises under the Hutchinson administration's 2-year-old merit pay system work at agencies other than colleges and universities, the Department of Transportation, Game and Fish Commission and constitutional offices.

Each agency was authorized to give performance-based raises totaling up to 2.4% of its total annual salaries.

The average salary for more than 26,000 employees on the state's computerized accounting system increased from $43,501 on July 1, 2018, to $44,082 starting July 1, said Johnston, who is the spokeswoman at the Department of Transformation and Shared Services.

About 23,802 of these employees were eligible for performance-based raises; 23,482 received increases, she said.

Evaluations rated employees on one of five levels; the highest performance rating identified an employee as a role model, while the bottom rating was for unsatisfactory performance, Johnston said.

"In most cases, if the employee is rated unsatisfactory, it is likely a performance improvement plan has been or will be implemented, providing the employee three months to demonstrate improvement," said Johnston, who received an $11,270 raise to $83,000 because of her promotion from director of the Arkansas Economic Development Commission's Rural Services Division to chief communications director and director of special projects at the Department of Transformation and Shared Services.

In addition to their performance-based raises received at the start of the fiscal year, the Arkansas State Police's commissioned officers received 5% pay raises in mid-July that lawmakers said are aimed at promoting retention and attracting qualified candidates.

The raises have increased the average annual salary of state troopers from $41,023 to $43,696, and the average for troopers first class from $46,067 to $49,438, according to figures from state police spokesman Bill Sadler.

The salaries for executive branch agencies have increased $22.6 million in fiscal 2020 and they have been paid through a combination of savings and efficiencies along with the state's performance fund, said Scott Hardin, a spokesman for the Department of Finance and Administration. 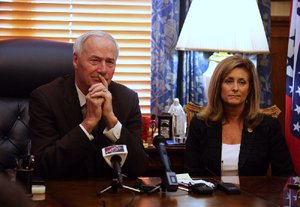 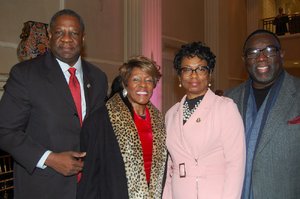 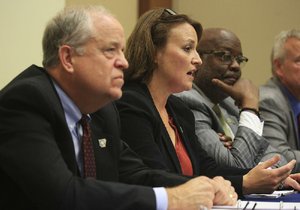 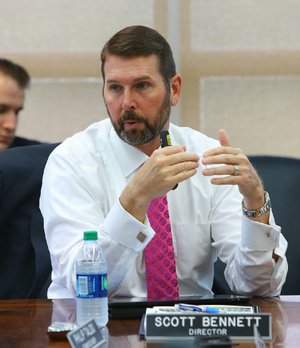 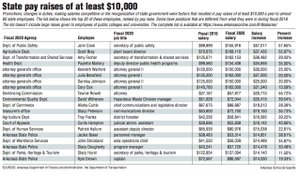