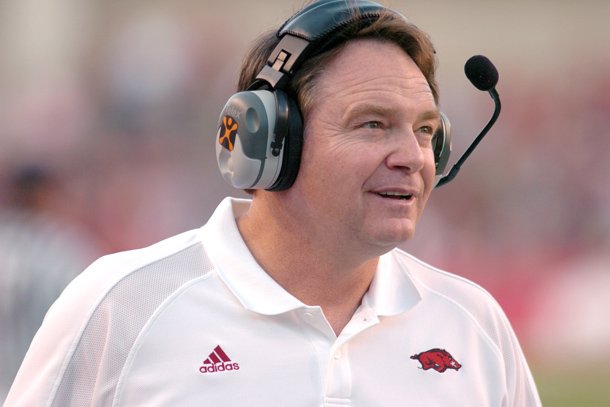 FAYETTEVILLE -- As Houston Nutt watched the LSU-Texas A&M football game last season from the New York studio where he works for CBS Sports, he began getting nervous.

Nutt wasn't worried about which team would win. That didn't matter to him.

What made Nutt increasingly nervous was how long the game kept going.

After the game was still tied after four overtimes, Nutt texted his younger brother, Danny.

"I was texting Danny saying, 'Are A&M and LSU going to make it? They're up to five overtimes now,' " Nutt said. "Danny texted back, 'No, they won't make it.'

"Then they got up to six overtimes. I texted Danny, 'I'm afraid they're going to break our record.' Danny said again, 'No, they won't make it.'

"When they got to that seventh overtime, I started getting really worried. I texted Danny, 'They've got to stop here!'

"Thank goodness they did."

Texas A&M beat LSU 74-72 in seven overtimes to tie an NCAA Football Bowl Subdivision record first set by the University of Arkansas in 2001 when the Razorbacks won 58-56 at Ole Miss.

• Since the NCAA adopted overtime in 1996, there have been five games go as many as seven extra periods, including three SEC games. Arkansas is the only team to play in two seven-overtime games. The third and fourth seven-overtime games were played exactly 11 years apart:

After the Arkansas-Ole Miss game, Houston Nutt said he couldn't recall much talk about how the overtime rule needed to be changed.

"I think David Cutcliffe brought it up a little bit at the SEC meeting that next spring," said Nutt, referring to the Ole Miss coach at the time. "But it never got much attention."

That also was the case in 2003 when Arkansas again went seven overtimes in beating Kentucky 71-63.

"Nobody said anything about changing the rules then, either, as far as I can remember," Nutt said.

But it didn't take long for the NCAA to change the overtime rules after Texas A&M outlasted LSU.

In April, the NCAA Playing Rules Oversight Panel approved a change that after four overtimes, teams will alternate two-point plays rather than begin possessions on their 25.

"It's definitely a student-athlete welfare issue," Arkansas Athletic Director Hunter Yurachek said. "There's been such a heightened awareness and focus on that, with the targeting rules and how we no longer have two-a-days practices.

"You don't want a student-athlete to get injured at the end of six- or seven-overtime game because they're exhausted."

Texas A&M and LSU combined for 255 plays in a game that lasted 4 hours and 53 minutes.

"That's a lot of plays," said Steve Shaw, the SEC's supervisor of officials. "Think of the student-athletes on the field for that long. We needed to take a look at that.

"At some point, we've got to get the players off the field. However, nobody wants a tie."

The new rule prevents a tie while limiting the plays. After the second and fourth overtimes, there will also be a two-minute rest period.

"The rules committee said, 'Let's leave the first two overtimes as is, but if we finish four overtimes, then it's time to make a change,' " Shaw said. "It's a way to still ultimately decide the game, but it was time [for a change]. There were way too many plays in some of these games.

"So this will be a great way to do it without changing the fabric of overtime."

"I think probably the biggest thing you'll see across college football is coaches will have more of those two-point situations built into their game plans," Morris of the rule change's impact. "We've definitely grown our library. We're going to probably take in three or four a game, but maybe a little bit more than that."

"I never complained about the length of the games, because I loved overtime," Nutt said. "We always had a mindset that if we get to overtime, we're going win."

"Once we got to overtime, we just felt like we had the advantage because we had been there so much before," Nutt said. "We were in great condition and we knew how to finish.

"Overtime games take a lot out of you physically, but when you win, it builds confidence."

LSU quarterback Joe Burrow said the Tigers and Aggies were fortunate their seven-overtime game was a regular-season finale.

"If we'd had to play a game that next week, that would have been very tough for sure," Burrow said. "I was probably sore for a week and a half."

The Razorbacks went 2-0 in games they played the week after going seven overtimes. They beat Central Florida 27-20 in Fayetteville in 2001 and beat South Carolina 28-6 in Little Rock in 2003.

Arkansas and South Carolina played on Thursday night -- five days after the Razorbacks won at Kentucky in a game that lasted until nearly midnight.

"I think that's extremely impressive by the players and impressive by your coach," Texas A&M Coach Jimbo Fisher said of the Razorbacks' victory over the Gamecocks. "Because managing how to get them ready without wearing them out is a big part of that, and how they probably practiced and made some changes or adjustments during that time."

Nutt said the Razorbacks didn't put on pads between the Kentucky and South Carolina games.

"We just practiced in sweats that week," Nutt said. "I told the guys, 'Hey, I know you can play. I know how tough y'all are, and now we're going to make practice about getting mentally prepared.'

"Our guys also did a really good job of putting that Kentucky game behind them. When you just won the longest game in the world for the second time in three years, you get a lot of attention.

"But our guys were able to get refocused. That's where our coaching staff and players did a great job of buying in and preparing."

Nutt said even if teams play eight or more extra periods in the future, he'll always consider his Razorbacks to be the overtime kings.

"We're going to be No. 1 in overtimes, because we're the only team to go the record seven overtimes twice, and we played all real overtimes where the ball was put on the 25," Nutt said. "Nobody is ever going to top what we did."